[0001] At least one of the present embodiments generally relates to a method or an apparatus for video encoding or decoding.

[0002] To achieve high compression efficiency, image and video coding schemes usually employ prediction, including spatial and/or motion vector prediction, and transforms to leverage spatial and temporal redundancy in the video content. Generally, intra or inter prediction is used to exploit the intra or inter frame correlation, then the differences between the original image and the predicted image, often denoted as prediction errors or prediction residuals, are transformed, quantized, and entropy coded. To reconstruct the video, the compressed data are decoded by inverse processes corresponding to the entropy coding, quantization, transform, and prediction. A number of coding tools can be used in the process of coding and decoding.

Figure 5 shows one embodiment of an encoding method under the general aspects described.

Figure 6 shows one embodiment of a decoding method under the general aspects described.

Figure 7 shows one embodiment of an apparatus for encoding or decoding using intra prediction mode extensions.

Figure 8 shows a typical processor arrangement in which the described embodiments may be implemented.

Decoder-side motion vector refinement (a.k.a DMVR): in inter bi-prediction, the motion vectors may be refined using the samples of the two motion predictions by minimizing the difference.

Bi-Directional Optical Flow (a.k.a BDOF or BIO): BDOF allows adding offsets to the bi-prediction samples that are computed with the bi-optical flow equation.

Local Illumination Compensation (LIC): the MC prediction may be corrected for local illumination change using simple model. The correction may be linear and the model parameters are derived from neighboring reconstructed and/or reference samples typically.

Generalized bi-prediction (a.k. GBI or BPWA or BWA): In case of inter bi-prediction, two predictions blocks are computed and combined with weighted sum. The weights to use are coded per CU with an index referring to pre-defined weights.

[0017] In hybrid video codecs, the coding efficiency is measured with BD-rate (Bjontegaard delta bitrate) gains typically. However, the tool complexity measured in number of operations and memory bandwidth is another important parameter to be considered, since it may impact the device manufacturing cost and the power consumption. When designing (e.g. standardization) or deploying the coding systems, one considers the trade-off between coding efficiency and tool complexity for each coding tool to be implemented in the codec.
[0018] However, for some coding tools, the trade-off between coding efficiency and tool complexity varies according to the block size. For example, for small blocks (e.g. 4x4), on one hand, the use of long-taps filters (e.g. 8-taps) for motion compensation or the bi-prediction, increases significantly the number of operations per sample compared to using shorter-taps filters (e.g. 6-taps) or uni-directional prediction. On the other hand, for large pictures (e.g. 2K or 4K), the 4x4 partitioning is rarely selected because larger block sizes have generally better trade-off, even if the exhaustive encoders must test numerous and costly (in term of number of operations) 4x4 block size configurations.
[0019] This is the reason why some codec design architects (e.g. standardization organization) have preferred to reduce the number of tools that implement 4x4 block size (ex: bi-prediction not supported for small blocks in VVC) or to simplify the tools supporting 4x4 block size (e.g. in a prior proposal, the 8-tap filters are replaced with 6-tap filters for 4x4 blocks).
[0020] The solutions proposed so far (hard choice of small block tools simplifications) consist in favoring some coding or architectures to the detriments of others. For example, VVC has chosen to favor the solutions with good complexity and gain trade-off for large picture sizes (e.g. ≥ 2K). If these choices have been motivated by the requirements of most applications which are based on large pictures, they negatively impact the lower image resolution use cases and jeopardize the versatility/adaptability of the final codec specification.
[0021] For example, another proposal is to:
[0022] It is reported that the BD-rate losses of these simplifications increase while the picture size decreases as depicted in Table 1. Table 2 also confirms the BD-rate losses are correlated with the amount of 4x4 CUs in the bit-stream.

[0023] The general aspects described herein propose High Level Syntax (HLS) and associated processes allowing control over the level of tools simplifications associated with small blocks and to better adapt the overall codec design to the particular application requirements and to various use cases.

[0024] A flag is defined and coded in the High-Level Syntax (HLS) indicating whether a set of coding tools are enabled (or disabled) for "small" blocks. This flag may be coded in SPS, PPS, slice or tile header for example (310).
[0025] An example of tools enabled/disabled for "small" blocks are (Table 3):
Table 3: summary of per tool "small" block categorization in JVET.

[0030] In a variant, the thresholds are function of the minimum size of a luma coding block minBlkSize (e.g. log2_min_luma_coding_block_size_minus3 in HEVC) and/or the maximum luma coding block size (e.g. CTU size, log2_diff_max_min_luma_coding_block_size in HEVC).
[0031] For example, the "small" blocks for tool-1 can be the blocks with less than minBlkSize x minBlkSize samples.
[0032] Then the thresholds are up-dated once the minimum or maximum block size has been decoded (320).

[0033] In a variant, one encodes directly in the HLS the value of the one or more thresholds.

including in said bitstream information representative of use of said one or more coding tools for blocks having said characteristics; and,

2. An apparatus, comprising:
a processor, configured to perform:

including in said bitstream information representative of use of said one or more coding tools for blocks having said characteristics; and,

parsing a bitstream for information representative of use of one or more coding tools for decoding video blocks;

using said information to enable use of said one or more coding tools for at least one video block in a bitstream; and

4. An apparatus, comprising:
a processor, configured to perform:

parsing a bitstream for information representative of use of one or more coding tools for decoding video blocks;

using said information to enable use of said one or more coding tools for at least one video block in a bitstream; and

an apparatus according to any of claims 4 through 11; and 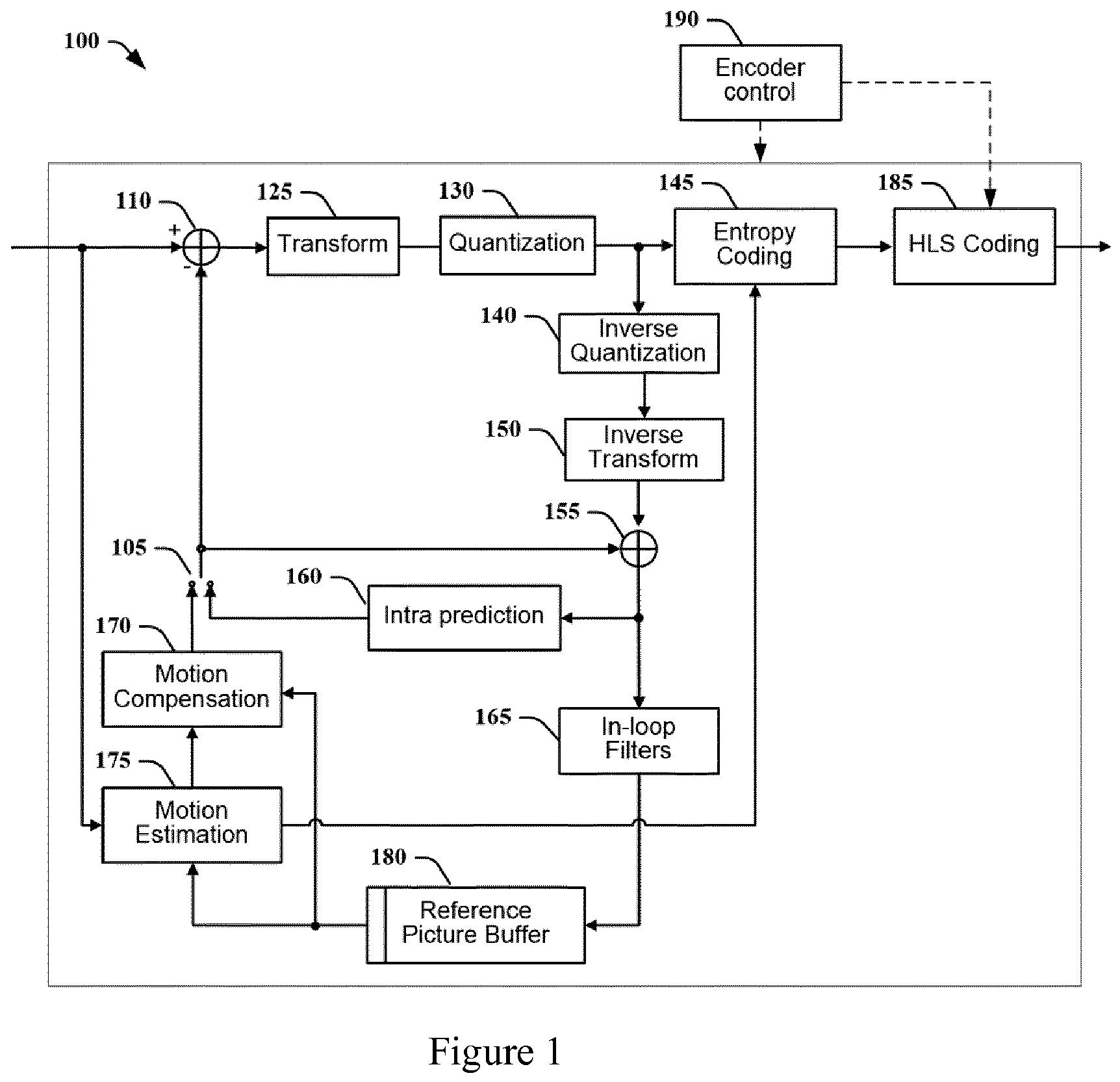 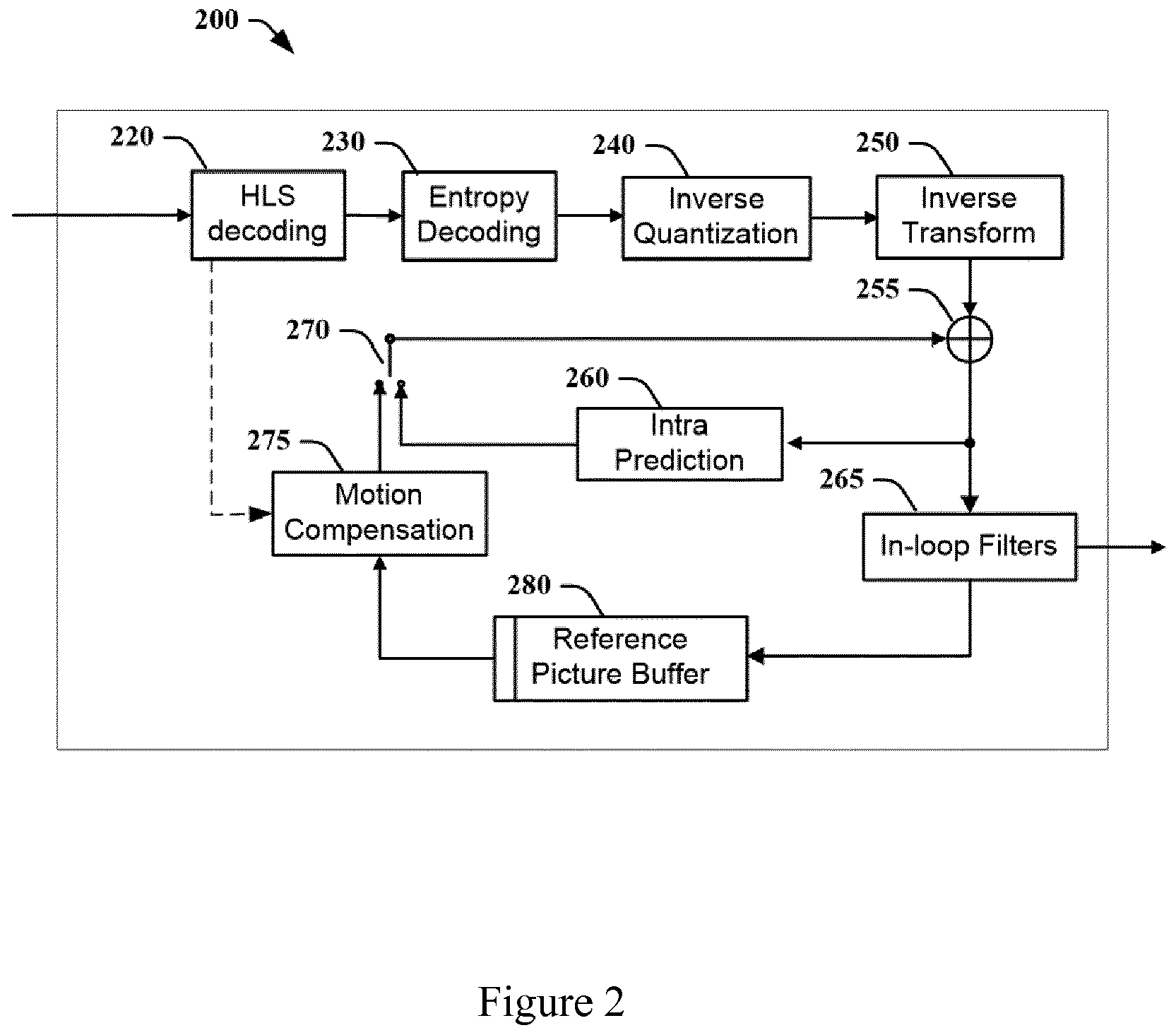 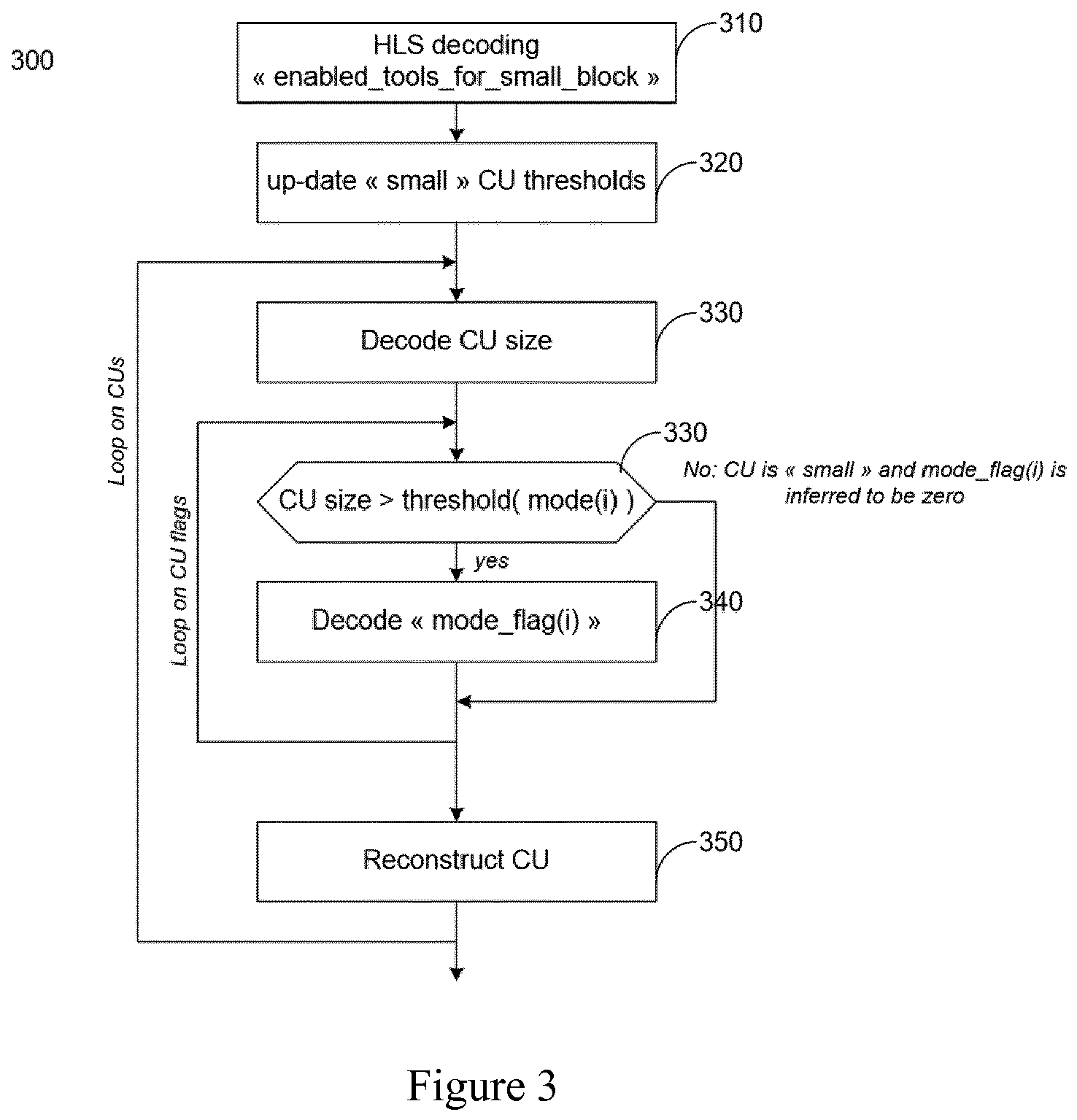 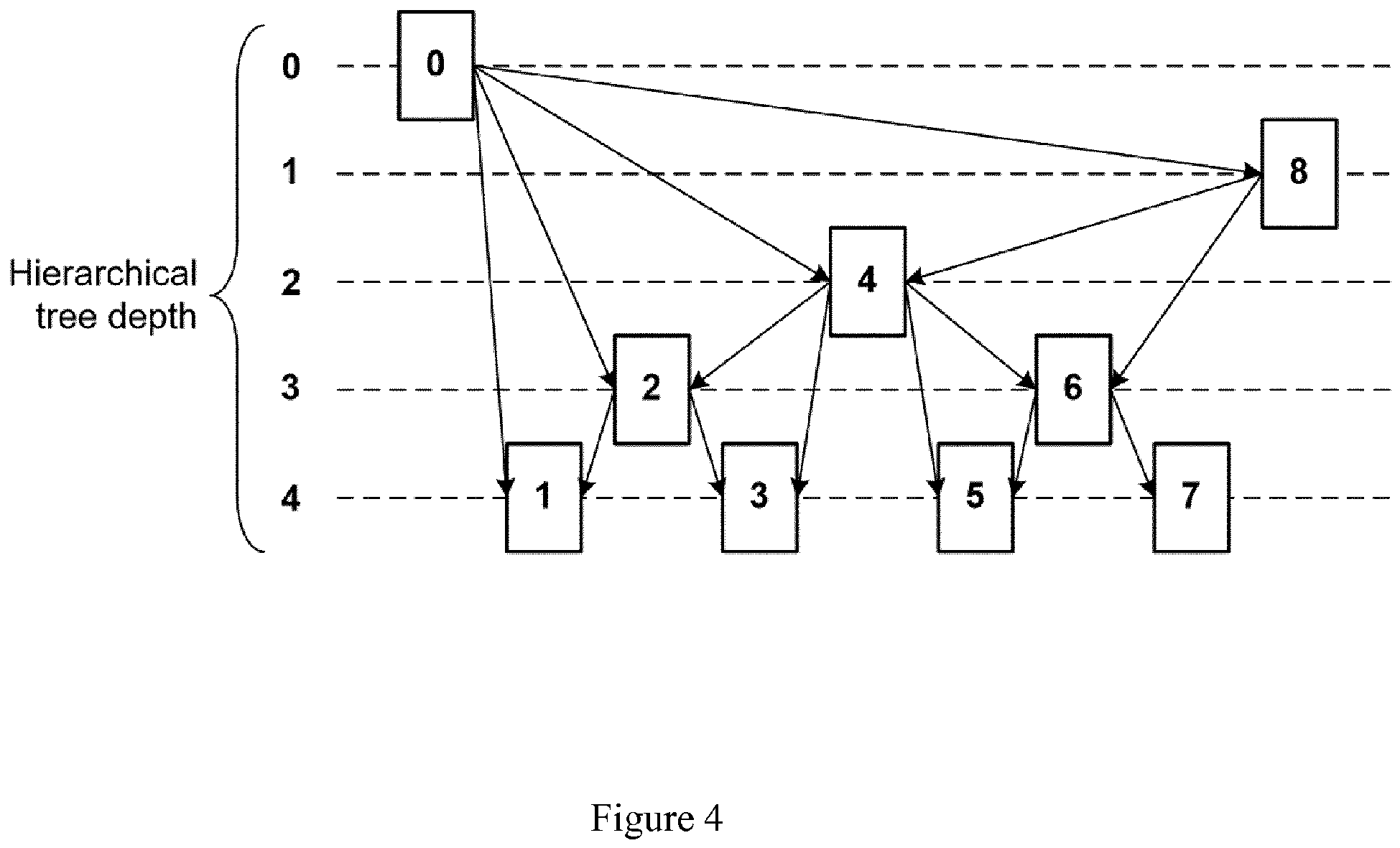 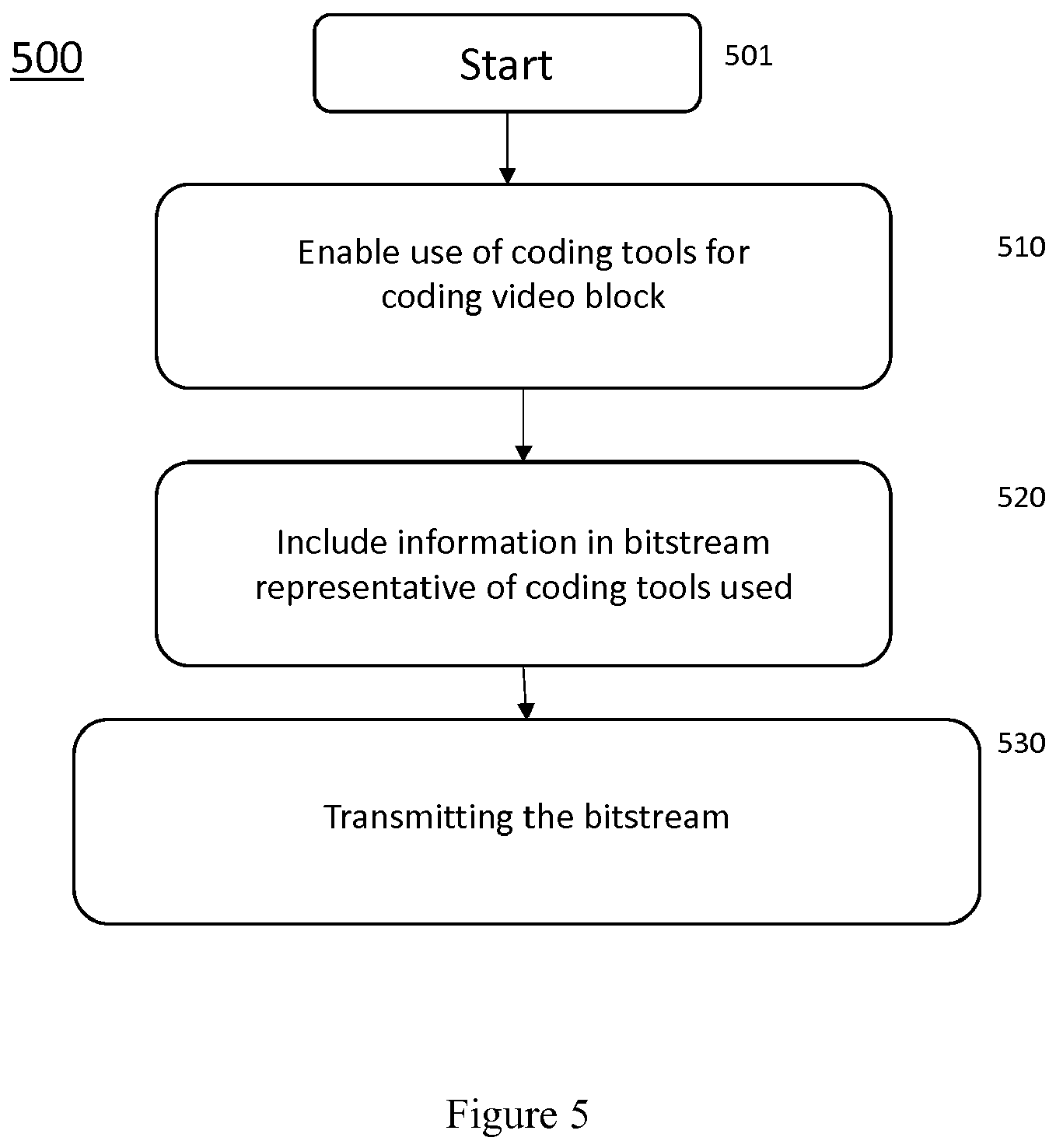 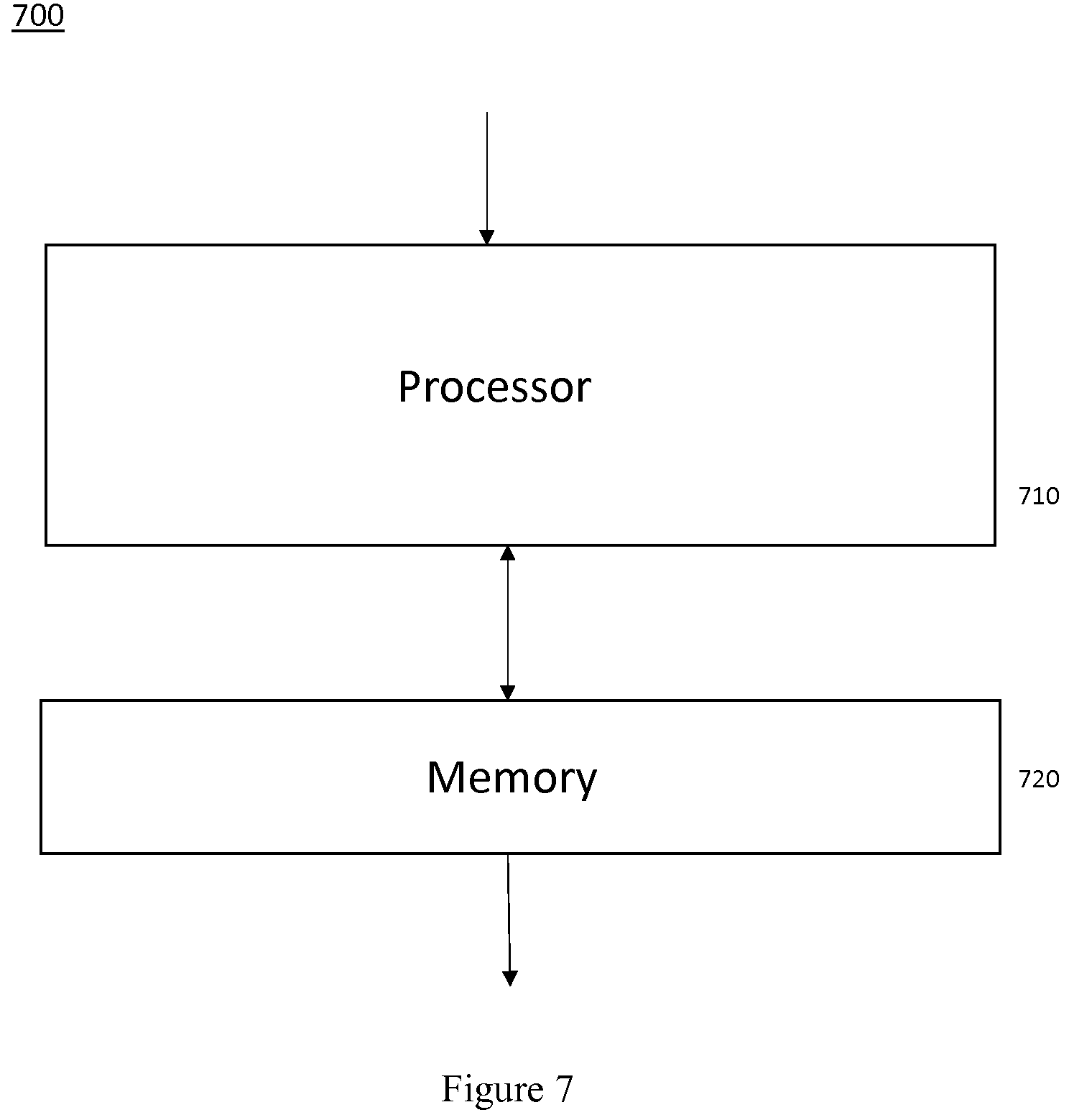 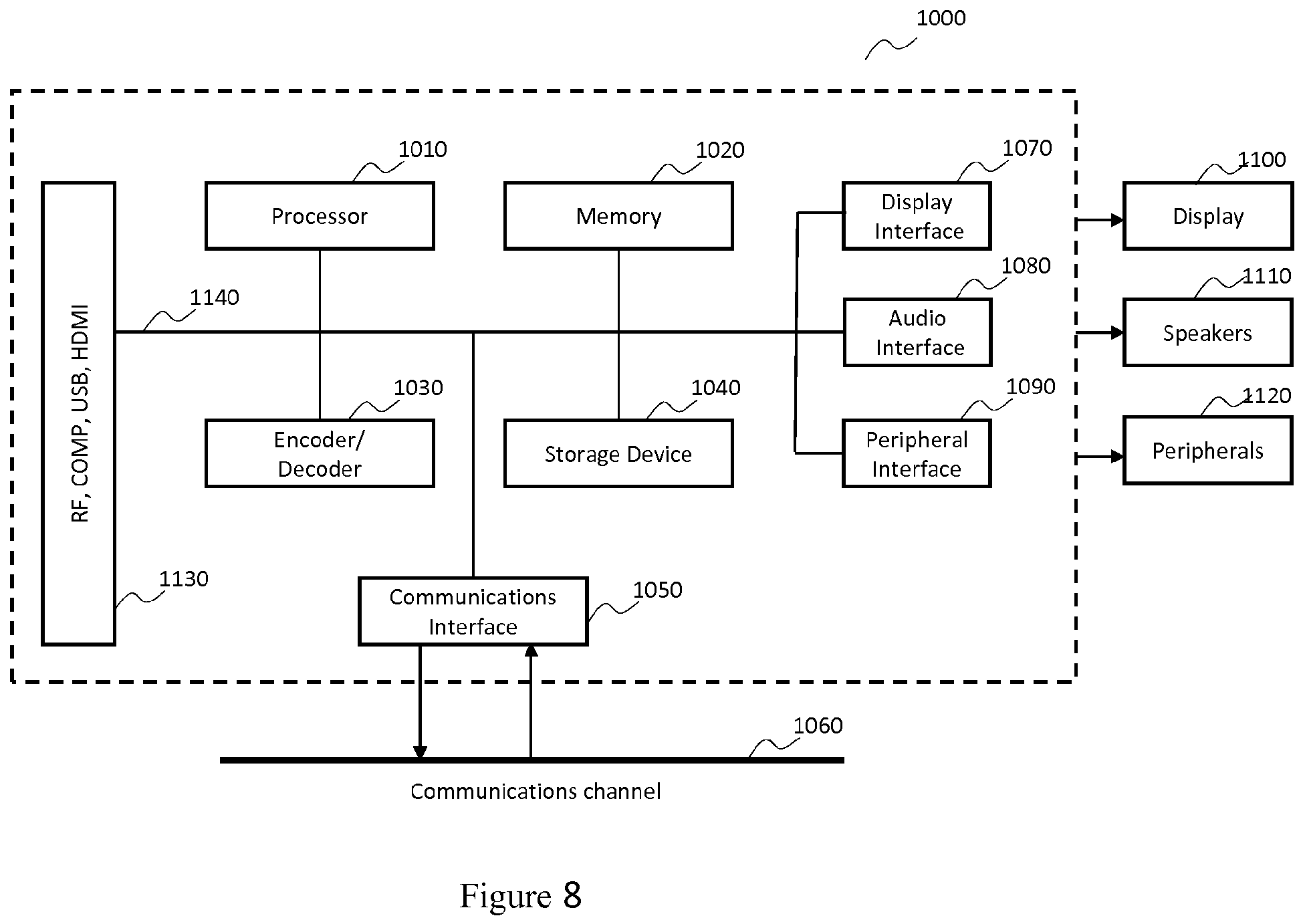 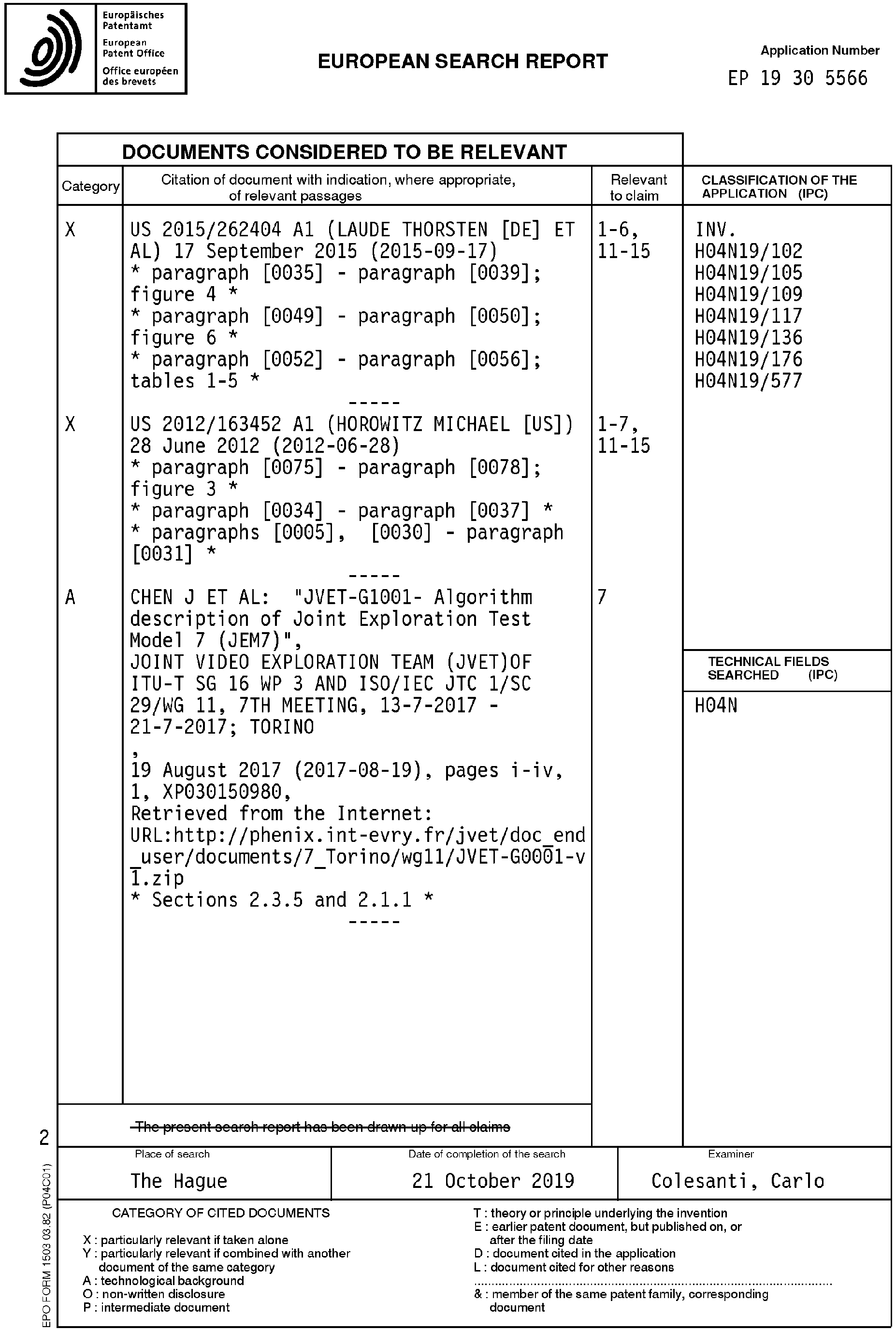 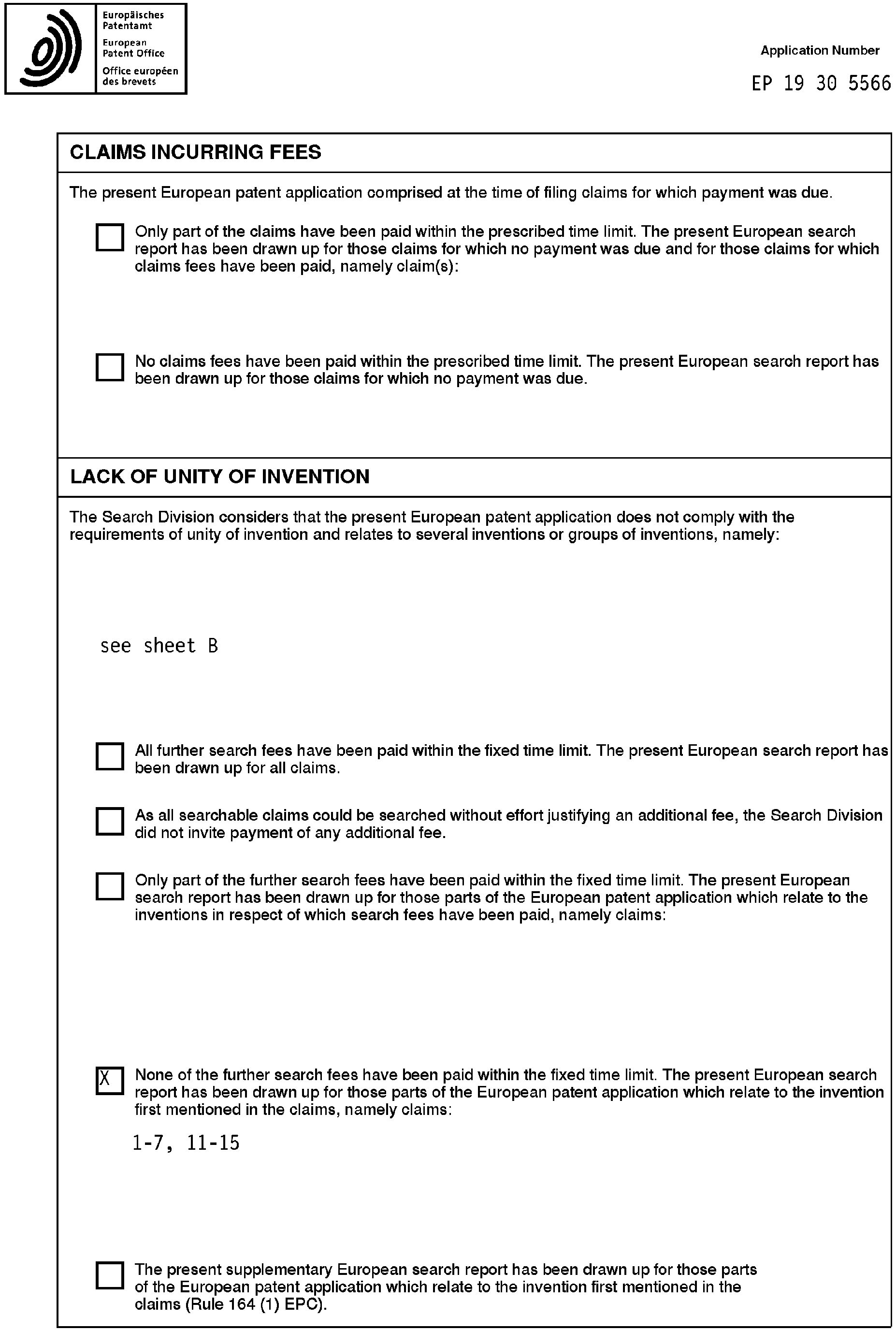 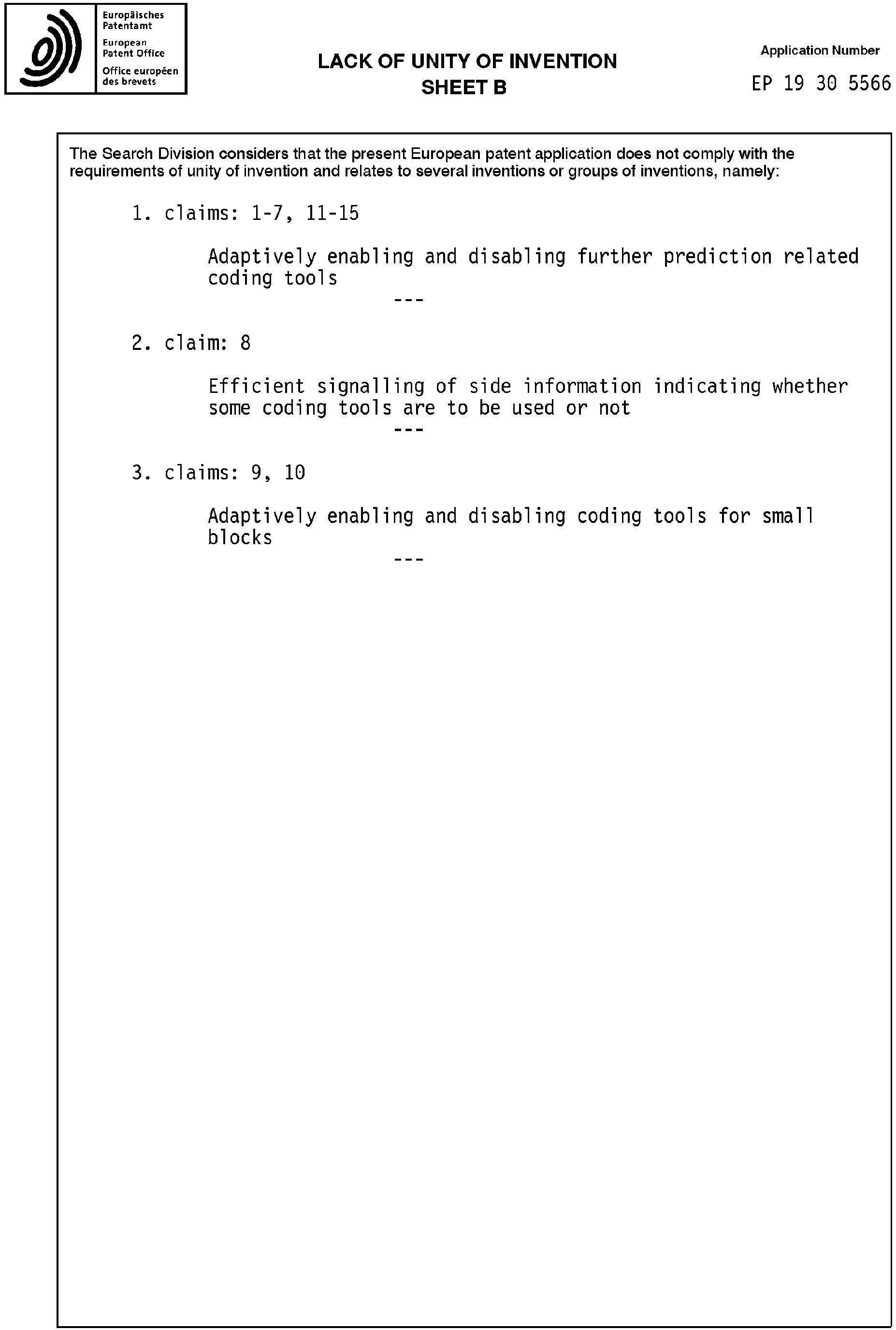 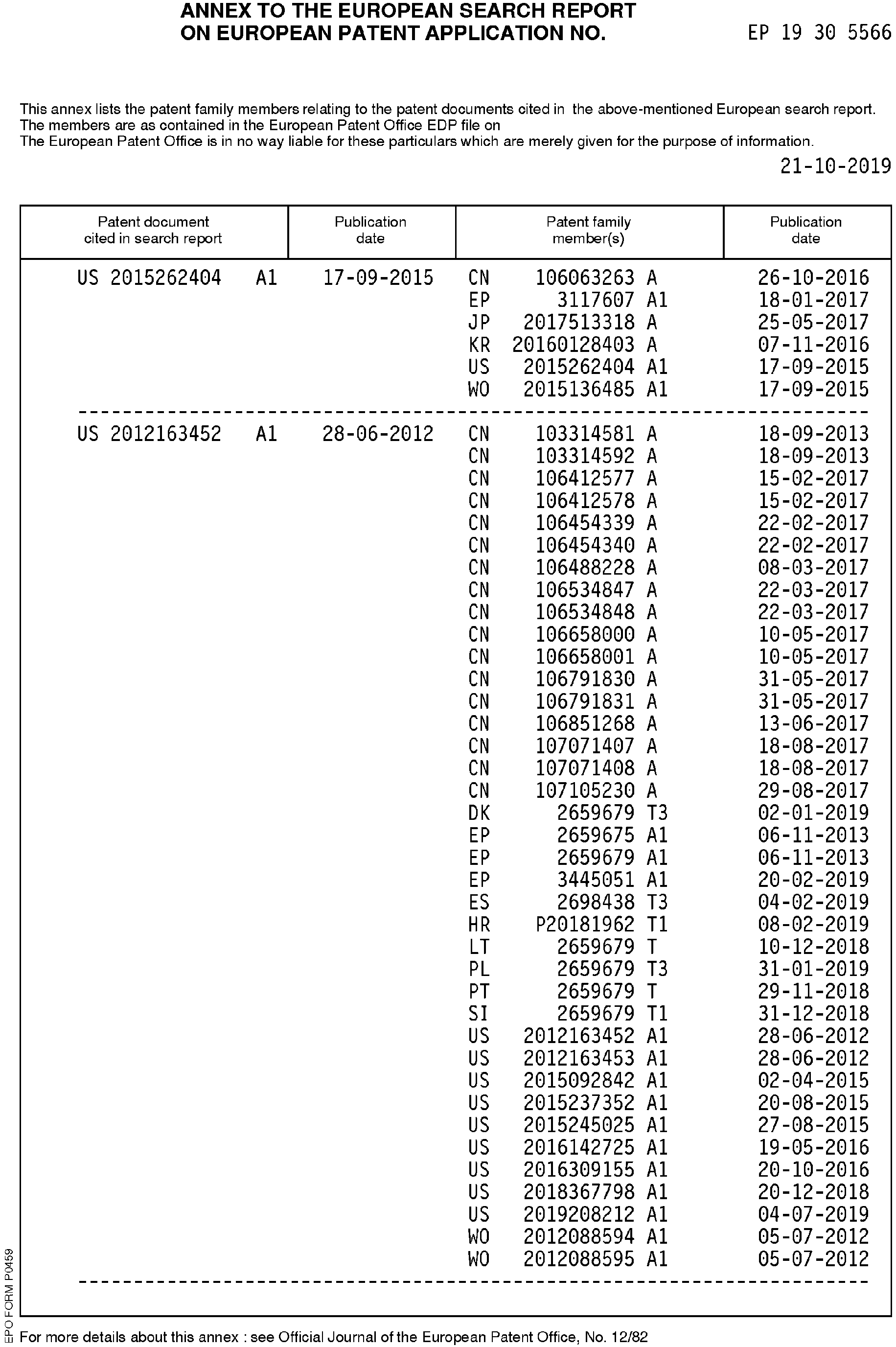