[0002] Such light-based skin treatment devices are, e.g., used for wrinkle treatment and for hair cutting. In light-based wrinkle treatment, the device creates a focal spot in a dermis layer of the skin to be treated. The power and pulse duration of the laser and the dimension of the focal spot are selected such that a laser induced optical breakdown (LIOB) phenomenon affects the skin in order to stimulate re-growth of skin tissue and, therewith, to reduce wrinkles. In light-based hair cutting, the incident light beam is focused inside the hair and the LIOB phenomenon causes the hair to be cut through.
[0003] For example, the international patent application published as WO 2005/011510 describes a device for shortening hairs comprising a laser source for generating a laser beam during a predetermined pulse time, an optical system for focusing the laser beam into a focal spot and a laser beam manipulator for positioning the focal spot in a target position. A dimension of the focal spot and a power of the generated laser beam are such that in the focal spot the laser beam has a power density which is above a characteristic threshold value for hair tissue above which, for the predetermine pulse time, a laser induced optical breakdown (LIOB) phenomenon occurs in the hair tissue. WO'510 falls short of teaching an exit focusing lens having a central aperture with a diameter less than 1mm.
[0004] WO 2008/001284 discloses further details, and for example discusses the laser beam requirements and required focusing system characteristics, such as the numerical aperture of the exit lens.
[0005] In general, laser induced optical breakdown (LIOB) occurs in media, which are transparent or semi-transparent for the wavelength of the laser beam, when the power density (W/cm2) of the laser beam in the focal spot exceeds a threshold value which is characteristic for the particular medium. Below the threshold value, the particular medium has relatively low linear absorption properties for the particular wavelength of the laser beam. Above the threshold value, the medium has strongly non-linear absorption properties for the particular wavelength of the laser beam, which are the result of ionization of the medium and the formation of plasma. This LIOB phenomenon results in a number of mechanical effects, such as cavitation and the generation of shock waves, which damage the medium in positions surrounding the position of the LIOB phenomenon.
[0006] LIOB utilizes high intensity sub-nanosecond or (so called picosecond) laser pulses to generate a high flux of photons necessary for the multiphoton absorption in the skin. The nonlinear LIOB process occurs only in the focal volume when extremely high photon flux surpassing the intensity threshold required for optical breakdown is generated in the focus by high numerical aperture (NA) focusing.
[0007] LIOB based skin treatment devices use a class 4 laser, which is potentially dangerous for the user. It is therefore important to include safety means to assure the safety of the user and the expensive device.
[0008] Traditionally, LIOB utilizes fundamental Gaussian TEM00 modes, in which the transverse profile of the optical intensity of the beam is described with a Gaussian function. For Gaussian beams, the peak intensity, namely the intensity on the beam axis, is two times the power divided by the effective mode area (Effective mode area =πw2, where w is the mode radius). When TEM00 Gaussian beams are used for creating LIOB, the exit focusing lens is often damaged due to back-reflectance from the skin, in particular at the center of the beam corresponding to the peak intensity.
[0009] The damaged lens can lead to poor treatment efficacy and non-desirable side effects for the user. In particular, a damaged exit window has a detrimental effect on the ability of the device to provide a sufficiently tight focus at the desired position, which may reduce the efficacy of the treatment process and/or may increase the occurrence of adverse side effects, such as skin irritation. If superficial lesions are created above the dermis, petechiae (micro-bleeding) will occur due to the micro-rupturing of capillaries, resulting in reduced efficacy, increased side effects and social down time.
[0010] Even though many active safety systems have been reported in the past, they are sensitive to failure, and they can be rather complex and therefore expensive.
[0011] An alternative option is to use Gaussian to Top-Hat converters to convert single mode Gaussian laser beam profiles to flat top laser beam profiles.
[0012] There remains a need for a more simple, passive, robust system to further increase the safety of the device and user compared to Gaussian and Top-hat intensity profiles.

[0013] The invention is defined by the claims.
[0014] Examples in accordance with a first aspect of the invention provide a light-based skin treatment device comprising:

a laser light source for providing a pulsed incident light beam for treating skin by laser induced optical breakdown of hair or skin tissue; and

a focusing system for focusing the incident light beam into a focal spot in the hair or skin tissue,

wherein the focusing system comprises an exit focusing lens having a central evacuated or air-filled aperture.

[0015] The aperture in the exit lens creates an annular shaped focused beam. The peak irradiance of the laser light at the skin surface is lowered by distributing the laser energy in a ring instead of a Gaussian beam profile. This lowers the intensity at any given point of the skin while retaining the photon flux in the focal volume as would be achieved using a Gaussian intensity profile. This reduces the back-reflected light due to the peak intensity at the center of the beam. This prevents contact window or exit lens damage and potential skin damage, thereby improving the safety and efficacy of the LIOB-based skin treatment.
[0016] For the same photon fluencies in the focal region, the annular illumination generates reduced levels of light back-reflected from the skin along the on-axis of the beam where the laser power is minimum, compared to a Gaussian illumination where the on-axis of the beam has a maximum intensity.
[0017] The laser light source preferably comprises a 1064nm laser. This provides low absorption and scattering inside the skin and thus provides a large penetration depth.
[0018] The laser light source is for example adapted to deliver pulses of energy 1 to 10mJ, and with a pulse duration of 100fs to 10ns, for example lOOps to 10ns. This provides energy levels suitable for LIOB.
[0019] The exit focusing lens preferably has a high numerical aperture to provide effective tight focusing to a desired point for safe operation of the system.
[0020] The aperture for example has a diameter of less than 1mm, for example less than 0.5mm.
[0021] The aperture for example has an area of less than 5% of the area of the exit focusing lens, or less than 5% of the effective aperture of the exit focusing lens.
[0022] The device may comprise a beam shaping arrangement for generating an annular pulsed incident light beam.
[0023] The beam shaping arrangement may comprise:

a spatial light modulator; or

a phase mask; or

a blanking mask; or

a holographic plate; or

[0024] These are various options for creating a desired annular beam.
[0025] The invention also provides a light-based skin treatment method comprising:

focusing the incident light beam into a focal spot in the hair or skin tissue by focusing using an exit focusing lens having a central aperture with a diameter less than 1mm.

[0029] Examples of the invention will now be described in detail with reference to the accompanying drawings, in which:

Fig. 4 shows a known focusing lens in accordance with the invention in more detail; and

in step 70, providing a pulsed incident light beam for treating skin by laser induced optical breakdown of hair or skin tissue; and

in step 72, focusing the incident light beam into a focal spot in the hair or skin tissue by focusing using an exit focusing lens having a central aperture.

[0074] It should be noted that the above-mentioned embodiments illustrate rather than limit the invention, and that those skilled in the art will be able to design many alternative embodiments without departing from the scope of the appended claims. In the claims, any reference signs placed between parentheses shall not be construed as limiting the claim. Use of the verb "comprise" and its conjugations does not exclude the presence of elements or steps other than those stated in a claim. The article "a" or "an" preceding an element does not exclude the presence of a plurality of such elements. The invention may be implemented by means of hardware comprising several distinct elements, and by means of a suitably programmed computer. In the device claim enumerating several means, several of these means may be embodied by one and the same item of hardware. The mere fact that certain measures are recited in mutually different dependent claims does not indicate that a combination of these measures cannot be used to advantage.

a laser light source (9) for providing a pulsed incident light beam (11) for treating skin (3) by laser induced optical breakdown of hair or skin tissue; and

a focusing system (23) for focusing the incident light beam (11) into a focal spot (15) in the hair or skin tissue,

a spatial light modulator; or

a phase mask; or

a blanking mask; or

a holographic plate; or 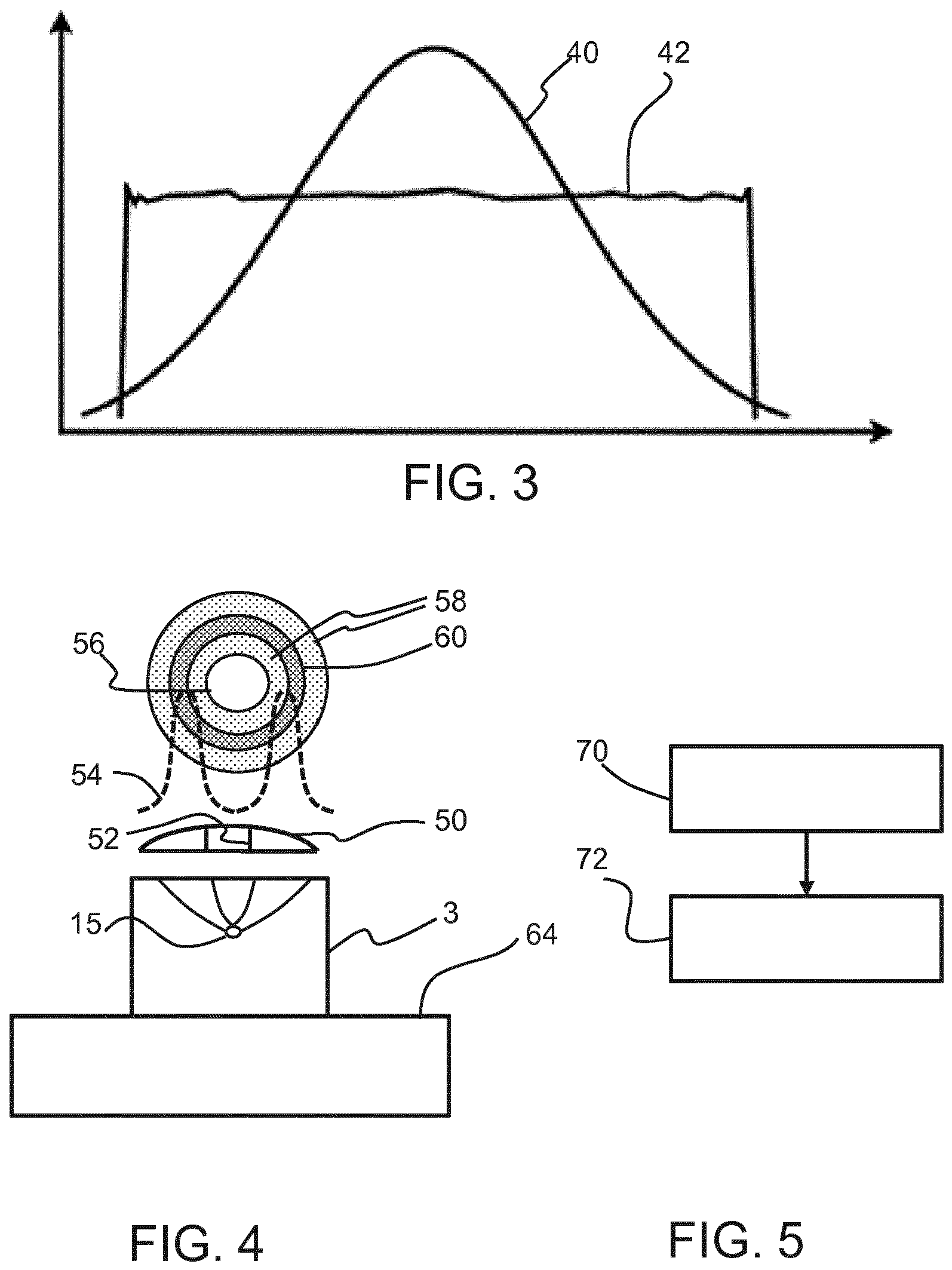