[0001] The present invention relates to a liquid self-dispensing device for small animals, to be used as means, among other uses, for example for supplying rat poison for the extermination of rats.
[0002] The object of the invention is to provide a device with a simple but very effective structure, wherein it is not possible for liquid to spill when handled if the nozzle thereof is not acted on, and with a structure that facilitates the administration of the liquid in the event of any friction or actuation with the animal, regardless of the direction in which said force is applied, providing a greater range of operation and all of this with adjustable sensitivity and a high degree of safety.
[0003] Although the preferred practical field of application for the invention is that of anti-rodent devices, the invention could also be applied in the field of drinking troughs for animals as well as for dispensing and/or dosing and/or supplying, for various purposes, another type of liquid substance.

[0004] The invention patent ES 2538737 A1 describes a device for dosing liquid rat poisons based on a stable positioning base on the ground, which incorporates an upper neck and a tray which is accessed by the liquid rat poison, with the particular feature that an upper tank is coupled on the upper neck, the base of which is able to be perforated by means of elements established to this end inside the neck of the base, in order for the liquid rat poison to be able to flow through a tube to the outlet, wherein there are balls that block said outlet, and prevent the liquid tray or bowl from spilling.
[0005] In this device, the valve or closure element consists of balls that work using gravity, which must be axially pressed on the aforementioned tube by the animal in order to carry out the opening and outlet of the liquid, such that it offers a minimum pressure surface, wherein said pressure must have a main component axial to the tube, which considerably limits the possibility that it may be accidentally actuated by the rodent.
[0006] Furthermore, when the spheres work using gravity, when the device is moved from one application area to another it is common for the liquid contained in the tank thereof to be accidentally spilled, if the device is not carried in an exact position.
[0007] Other limitations of this type of device are the lack of regulation of sensitivity when dosing the liquid.
[0008] The surface tension and the viscosity of some liquids to be dosed can affect the outlet thereof, and some of the solid components dissolved in the formulations, due to evaporation of the solvents, can create sediments, causing the balls to be blocked and interrupting the supply. On the other hand, depending on how the system is stuck, unwanted spills may occur.

[0009] The liquid dosing device that is recommended solves the aforementioned problems in a completely satisfactory manner, based on a simple but effective solution.
[0010] To do so, and more specifically, the device of the invention is made from a tray for receiving the liquid, equipped on one of the ends thereof with an extension with a vertical expansion wherein an appendage provided laterally in a dosing body is plugged, wherein a narrowing is defined from which a neck acting as an outlet nozzle emerges, a narrowing on which an elongated valve element is positioned, which ends in a flange on the top, on the internal surface of which a sealing gasket is established which ensures the leak-tight closure of the nozzle while the valve element is not acted on.
[0011] Said end flange of the valve element defines a support surface for a spring or elastic element which maintains said valve element pressed in a closed position, such that the dosing body, which has the upper end thereof in a cylindrical configuration, will include a regulation and/or fastening system independent from the threading of the neck of the tank containing the product, which initially will come sealed, such that the elastic element includes piercing elements on the upper face thereof which in the coupling by threading or by any other conventional means of the dosing body in the neck of the liquid tank, the seal is pierced, enabling the passage of the product to the inside of said dosing body, this being retained by the valve element.
[0012] This special structuring means that the device can be moved from one implementation site to another without the risk of the product being poured out of the tank containing it regardless of the position in which the valve element is arranged, as long as it is not acted upon, unlike what occurred with the conventional devices of this type.
[0013] In this manner, the valve element will protrude a certain distance from the nozzle, such that it can be moved both axially and laterally within the dosing body, offering multiple ways the device can be operated by the rat, which improves the effectiveness thereof.
[0014] In accordance with another feature of the invention, it has been envisaged that the neck acting as a dosing nozzle for the product remain in an assembly location below the edge of the tray for receiving the liquid, such that the overflow of said fluid is not possible once said maximum capacity level of the tray has been reached.
[0015] This system solves the problems derived from the physical features of the fluids used, while enabling the working pressures of the plug to be adjusted, in order to better adapt to the viscosity and surface tension features of the liquids to be dispensed.

[0016] As a complement to the description that will be provided herein, and for the purpose of helping to make the features of the invention more readily understandable, according to a preferred practical exemplary embodiment thereof, said description is accompanied by a set of drawings constituting an integral part thereof in which, by way of illustration and not limitation, the following is represented:

Figure 1 shows a perspective and exploded view of a self-dispensing device for liquid rat poison made in accordance with the object of the present invention.

Figure 2 shows a cross-sectional view of the device of the invention at the level of the dispensing means provided therein.

Figure 3 shows, finally, a perspective view of the properly-assembled device.

[0017] In view of the outlined figures, it can be seen how the liquid-dispensing device of the invention is made from a wide base (1), wherein a tray (2) for receiving the liquid is established, as well as an extension (1') wherein an upper appendage (3) is defined wherein a rod (4) is able to be plugged, which is provided with a dosing body (5) wherein a cylindrical initial segment (5') is defined, provided with means for coupling to the neck (13) of a liquid tank (14), for example by means of threading, pressure or other; dispensing body which undergoes a strong narrowing in the lower area thereof, ending in a neck (6) acting as a nozzle, the narrowing determining a seat (11) wherein an elongated valve body (7) moves, with an end perimeter flange (8) wherein a sealing gasket (10) is established.
[0018] The valve body (7) has a certain clearance with respect to the neck (6) wherein it moves, the extremity (9) thereof partially protruding from said neck, such that, as seen in figure 2, said valve body is able to move not only axially upward, but rather any lateral force to which the extremity (9) thereof is subjected will cause an angular movement in the entire valve body, and consequently the unlinking of the sealing gasket (10) from the seat (11), facilitating the flow of liquid towards the tray (2).
[0019] In order to regulate the pressure level that must be carried out on the valve body (7), the dosing body incorporates a perimeter positioner therein, wherein an elastic element (12) is established which flexibly presses on the flange (8) of the valve body (7) and which on the other end thereof ends in a series of spikes or blades (16) for cutting the seal (15) of the liquid tank when the dosing body is coupled in the neck (13) of the liquid tank (14).
[0020] In this manner, depending on the position in which the elastic element is fixed between the neck (13) and the dosing body (5), the stress necessary to actuate the valve body (7) and the resulting liquid outlet towards the tray (2) will be able to be gauged, since the elastic element (12) will be subjected to more or less compression with respect to the valve element whereon it rests.
[0021] Finally, it must be indicated that the neck (6) acting as a nozzle will be in an assembly arrangement on the base (1) such that the outlet edge of the liquid through the same is arranged slightly below the maximum filling level of the tray (2), so that when said tray is full, said nozzle is immersed, preventing the outflow of more liquid which would cause the overflow of said tray (2). 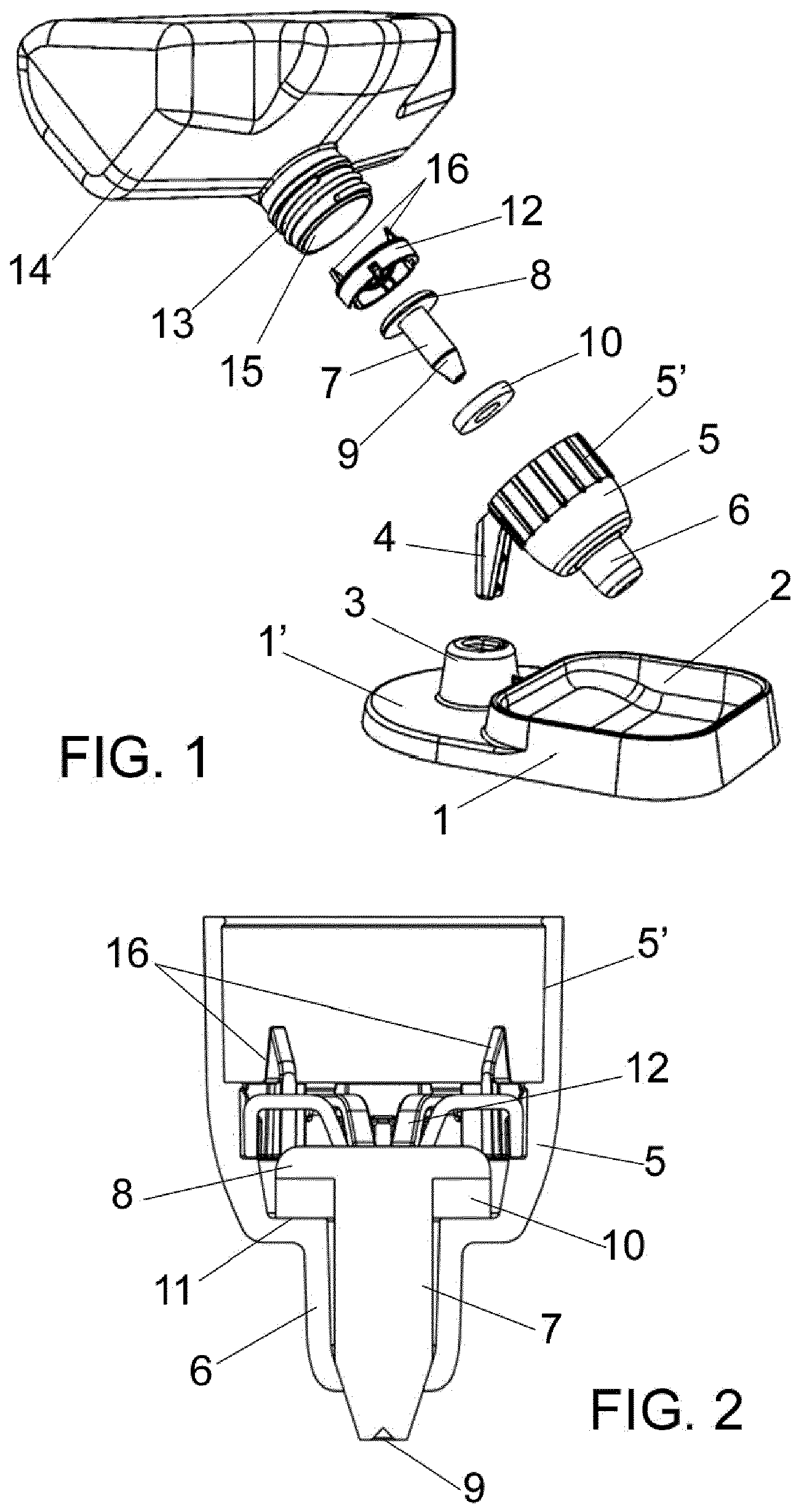 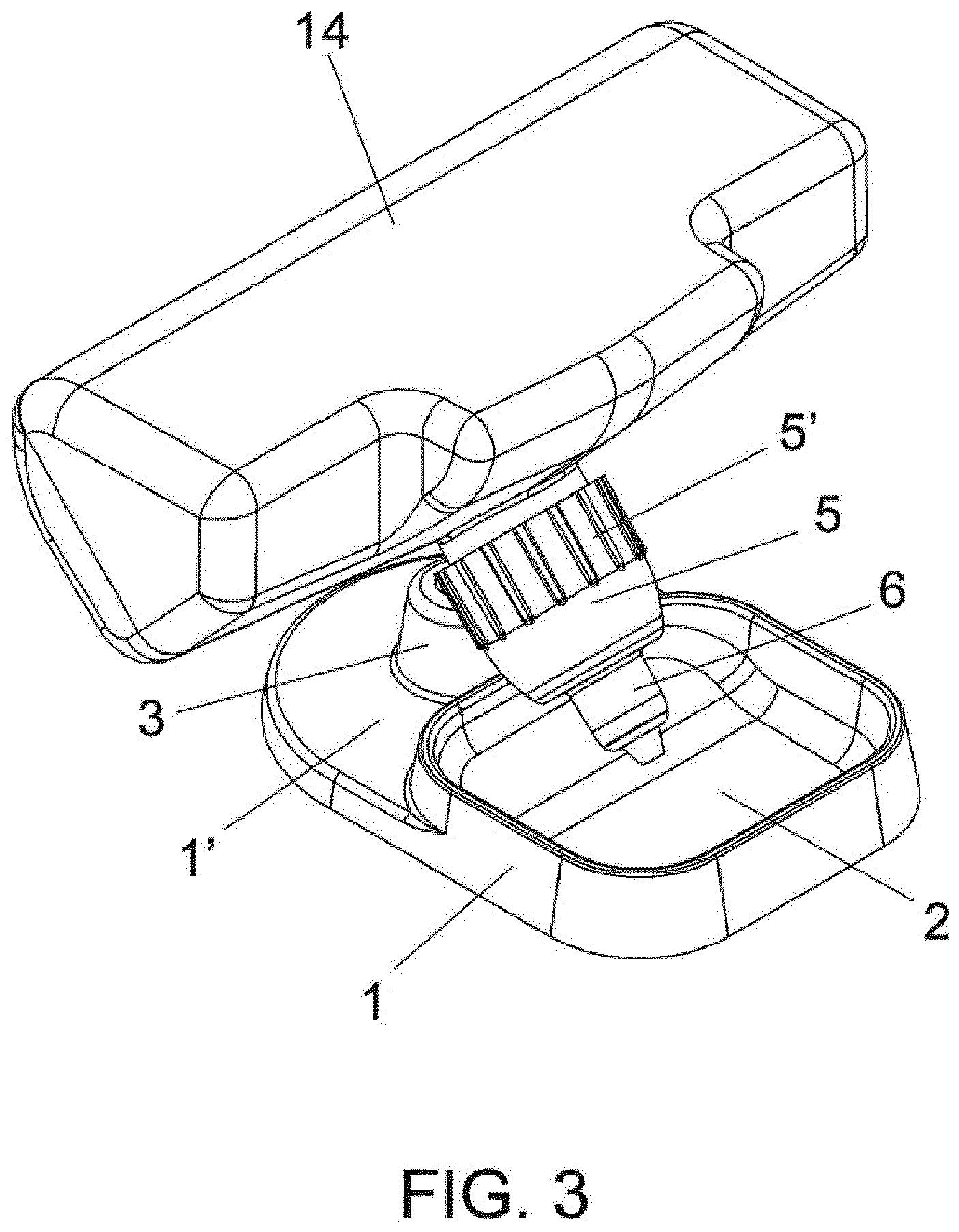 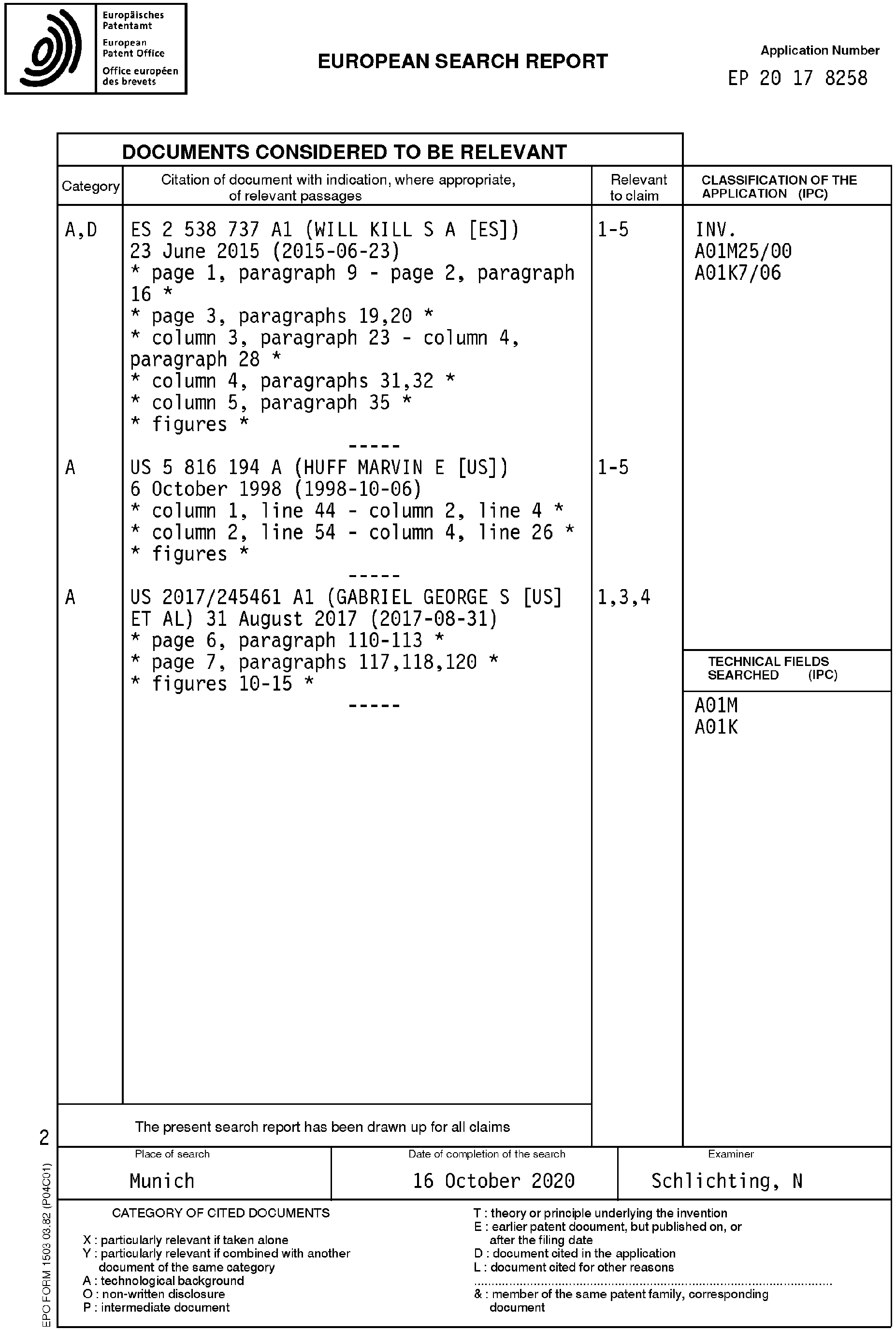 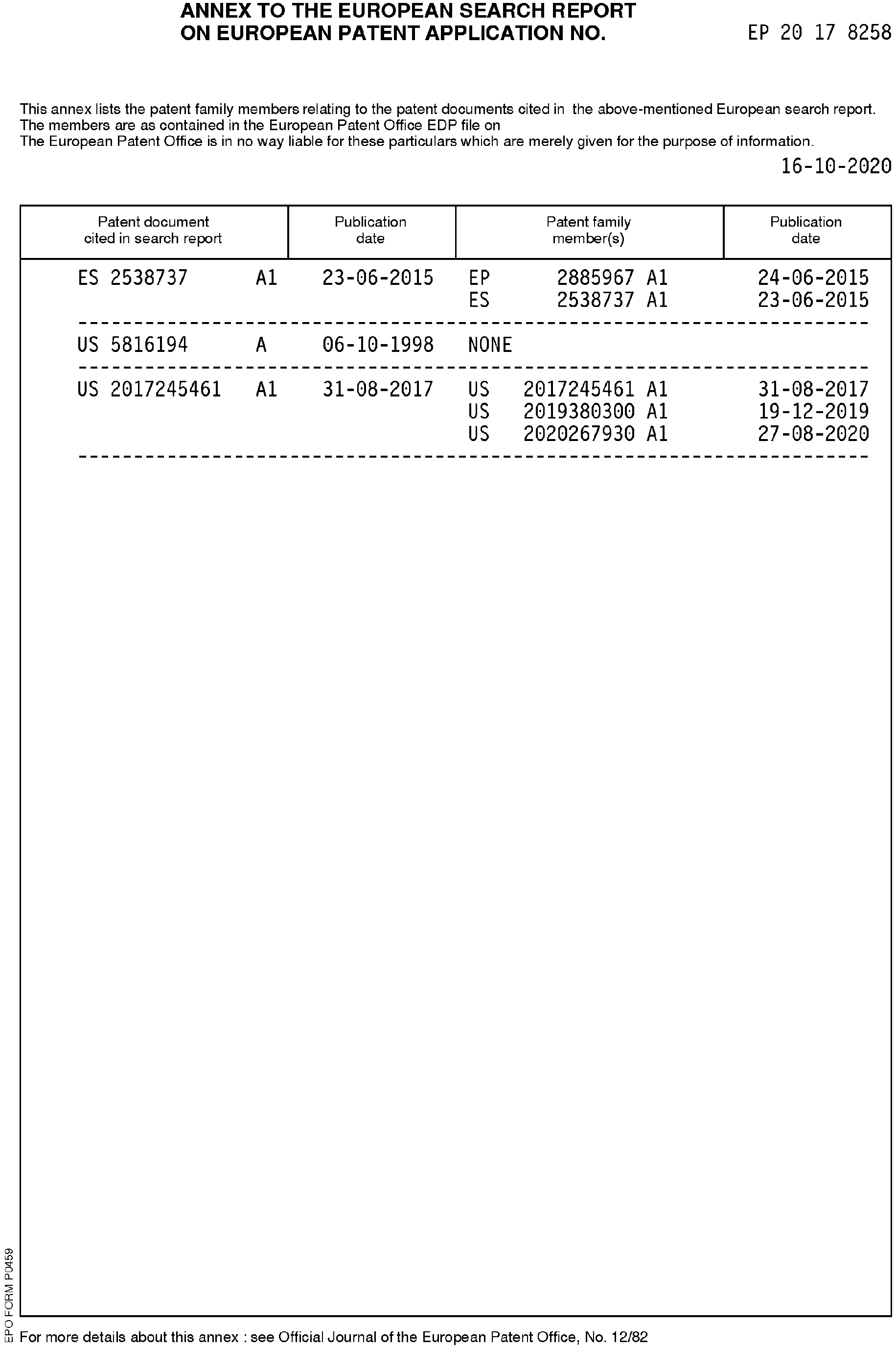