[0001] The present invention relates to the use of low power wide area infrastructure for the purpose of localizing mobile items.

[0002] Wide area localization is typically based on GPS (Global Positioning System) techniques or on cellular (GSM) infrastructure. Both types of localization methods may be regarded as complex and power intensive, requiring high investments to set up the underlying systems whilst individual receivers for both techniques rapidly drain the available power sources for mobile devices. These existing problems become even more relevant for low-powered mobile devices as envisaged for use in the currently emerging Internet of Things (loT) infrastructures.
[0003] An loT infrastructure may be characterized as including a low-power, low-bandwidth wide area network such as a Long-range Wide Area Network ("LoRaWAN) made up of mainly stationary access points or gateways, capable of providing communication channels to a multitude of low-power, low-bandwidth mobile or immobile devices. These devices are in most cases meant to be produced at a fraction of the costs of GPS or GSM devices with very limited power resources or batteries. When looking at applications of loT, location tracking is considered an important field of use, allowing for example the location of materials and devices on a campus or larger industrial sites or to track deliveries in a neighborhood or within larger buildings. LoRa networks currently use (license-free) sub-gigahertz radio frequency bands, i.e. in the range of 150 MHz to 1 GHz, like the 169 MHz, 433 MHz, 868 MHz (Europe) and 915 MHz (North America) frequency bands. The typical data rates are in the range of 10 bps to 100 kbps.
[0004] As described in recent surveys such as the LoRaWAN GEOLOCATION WHITEPAPER as prepared by the LoRaAlliance™ Strategy Committee, January 2018 (https://lora-alliance.org/sites/default/files/2018-04/geolocation_whitepaper.pdf) or in "A Survey of Indoor Localization Systems and Technologies" by F. Zafari et al, arXiv:1709.01015v3 [cs.NI] 16 Jan 2019, the LoRaWAN™ protocol provides basically two methods for geolocation determination: Received Signal Strength (RSS) based, for coarse location determination, or Time Difference Of Arrival (TDOA), for finer accuracy with the latter typically achieving an accuracy of 20m to 200m depending on the existing infrastructure, e.g. the density of gateways, obstacles etc.. In TDOA, several gateways simultaneously receive the same uplink message, and the end-device location is determined using multi-lateration techniques.
[0005] To achieve higher accuracy, it has been proposed to use a fingerprint classification of LoRa signals, see for example Wongeun Choi, Yoon-Seop Chang, Yeonuk Jung, and Junkeun Song. "Lowpower lora signal-based outdoor positioning using fingerprint algorithm". ISPRS International Journal of Geo-Information, 7(11), 2018 and Micha Burger, "LoRa localisation improvement using GPS Fingerprint and Al Algorithms". Master thesis, Ecole polytechnique fédérale de Lausanne, 2018.
[0006] Compared to the known fingerprinting-based methods using time-stamped signals, the received signal strength (RSS) based approach is considered to be one of the simplest approaches requiring little or no additional circuitry over and above the normal communication tasks of devices and gateways. The RSS is the actual signal power strength received at the receiver, usually measured in decibel-milliwatts (dBm) or milliWatts (mW). The RSS can be used to estimate the distance between a transmitter (Tx) and a receiver (Rx) device; the higher the RSS value the smaller the distance between Tx and Rx. The absolute distance can be estimated using several different signal propagation models given that the transmission power or the power at a reference point is known.
[0007] RSS based localization may require in one variant trilateration or N-point lateration, i.e., the RSS at the device is used to estimate the absolute distance between the user device and at least three reference points, such as the gateway locations; then basic geometry/trigonometry is applied for the user device to obtain its location relative to the reference points. In a similar manner, in a second variant the RSS at the reference points is used to obtain the location of the user device. In the latter case, a central controller or ad-hoc communication between reference points is needed for the total RSS collection and processing. While the RSS based approach is simple and cost efficient, it suffers from poor localization accuracy (especially in non-line of-sight conditions) due to additional signal attenuation resulting from transmission through walls and other big obstacles and severe RSS fluctuation due to multipath fading and indoor noise. Such problems require more sophisticated approaches.
[0008] The typical applications for a low power location determination are loT applications based on small sensors/devices that are battery powered and operate over a limited space such as asset management requiring infrequent position updates where status and location of various assets, track goods, people and animals are monitored or to locate parcels and orders. Small mobile LoRa nodes may be attached to different components in an assembly line to break down the time spent at each step. Some other examples include geo-fencing to detect the movement of a normally stationary object: this can be implemented in construction sites, utility yards, airports campuses to protect against theft.
[0009] In view of the known art, it may be therefore seen as a problem of the present invention to provide improved but robust location or tracking methods using the communication and signals available in LoRaWAN networks.

[0010] RSS based location or tracking methods for low-power wide area networks are provided, substantially as shown in and/or described in connection with at least one of the figures, and as set forth more completely in the claims.
[0011] These and other aspects, advantages and novel features of the present invention, as well as details of an illustrated embodiment thereof, will be more fully understood from the following description and drawings.

[0012] The invention will be better understood with the aid of the description of embodiments given by way of example and illustrated by the figures, in which:

Fig. 1 shows basic steps in accordance with an example of the invention;

Figs. 2A and 2B illustrate an architecture of a multistage LSTM neural network;

Fig. 3A and 3B illustrate an encoder stage and a decoder stage of a transformer;

Figs. 4A and 4B show examples of the location dependent uncertainty for an x and a y coordinate of a location of a mobile device; and

Fig. 5 show a determined location and its uncertainty overlaid over a geographical map of LoRaWAN area/campus.

[0013] Fig 1. shows basic steps in accordance with an example of the present invention. In a first step 10 a model for linking signal strength and locations is either built or provided which is capable of accepting input values relating to RSS, or relating to RSS and/or ESP, or relating to RSS and/or SNR, or a combination of RSS, ESP, and SNR, of electromagnetic signals transmitted between a mobile device to be localized or tracked and one or more access points or gateways of a low-power wide area network (LoRaWAN) with known locations. In a second step 20 a mobile device is moving across the reception area of the low-power wide area network while either continuously or intermittently transmitting or receiving signals to or from the one or more gateways. In the third step 30 the signals are evaluated to derive values representative of RSS, SNR or ESP, and as required as input to the model. In the step 40 the values of step 30 are used as input to the model. And in step 50 the model generates values representative of the location of the mobile device and makes available the generated location values together with a location dependent measure of uncertainty in the location.
[0014] The RSS related signals may be typically measured in units such as dBm or relative units as in the various measures of the Received Signal Strength Indicator (RSSI. It represents a measurement of how well the receiver "hears" a signal from the transmitter.
[0015] The Signal-to-Noise Ratio (SNR) is the ratio between the receiver power signal and the noise floor power level which is the sum of the powers of all unwanted interfering signal sources that can corrupt the transmitted signal. LoRa typically operated below the noise floor giving negative SNR values.
[0016] Using RSS and SNR a combined value such as the Estimated Signal Power (ESP) may be calculated using for example the relation

1. A method of determining a location of a mobile device communicating with one or more gateways of a long-range low-power wide-area network (LoRaWAN) comprising the steps of:

- using a model capable of accepting input values relating to a signal strength measure (RSS) of electromagnetic signals transmitted between the mobile device to be localized or tracked and the one or gateways of the long-range low-power wide-area network (LoRaWAN) having known locations;

- collecting the signals while the mobile device is moving across the reception area of the long-range low-power wide-area network (LoRaWAN) and either continuously or intermittently transmits signals to the one or more gateways;

- evaluating the signals to derive values representative of the signal strength measure (RSS; RSSI) as required as input signals to the model;

- using the inputs signals as input to the model; and

- using the model to generate values representative of the location of the mobile device and to make available the generated location values together with a location dependent measure of uncertainty in the location. 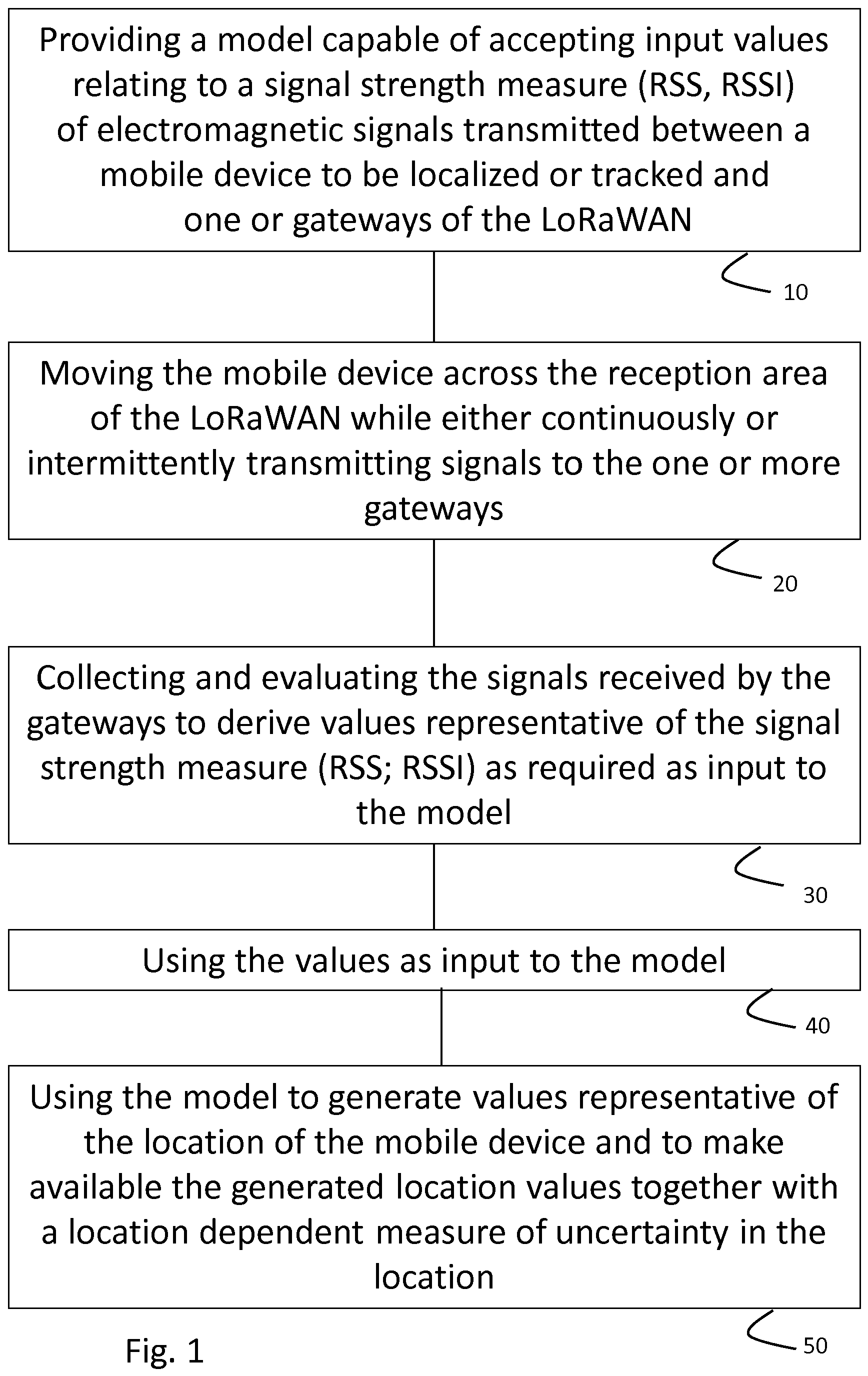 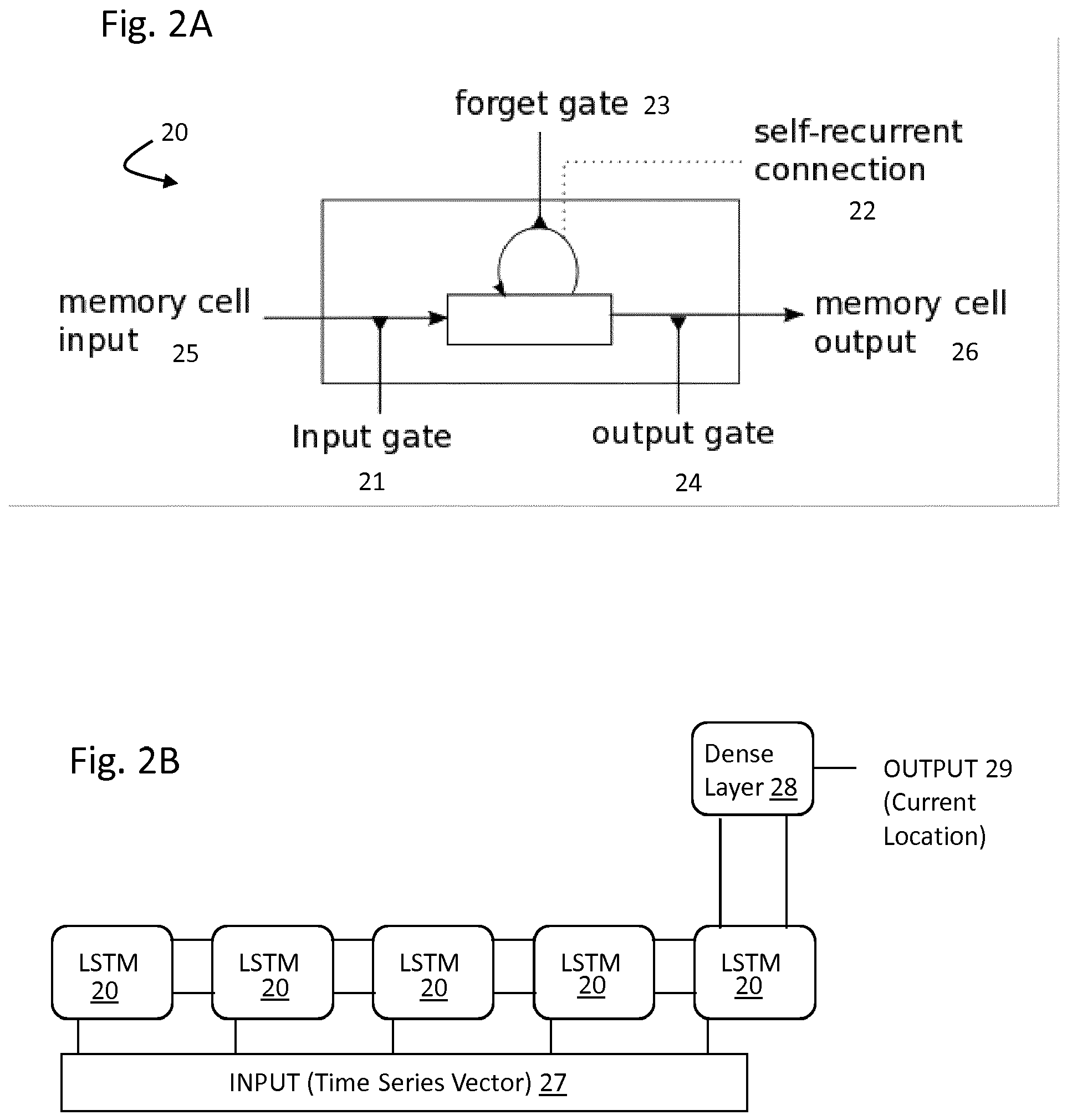 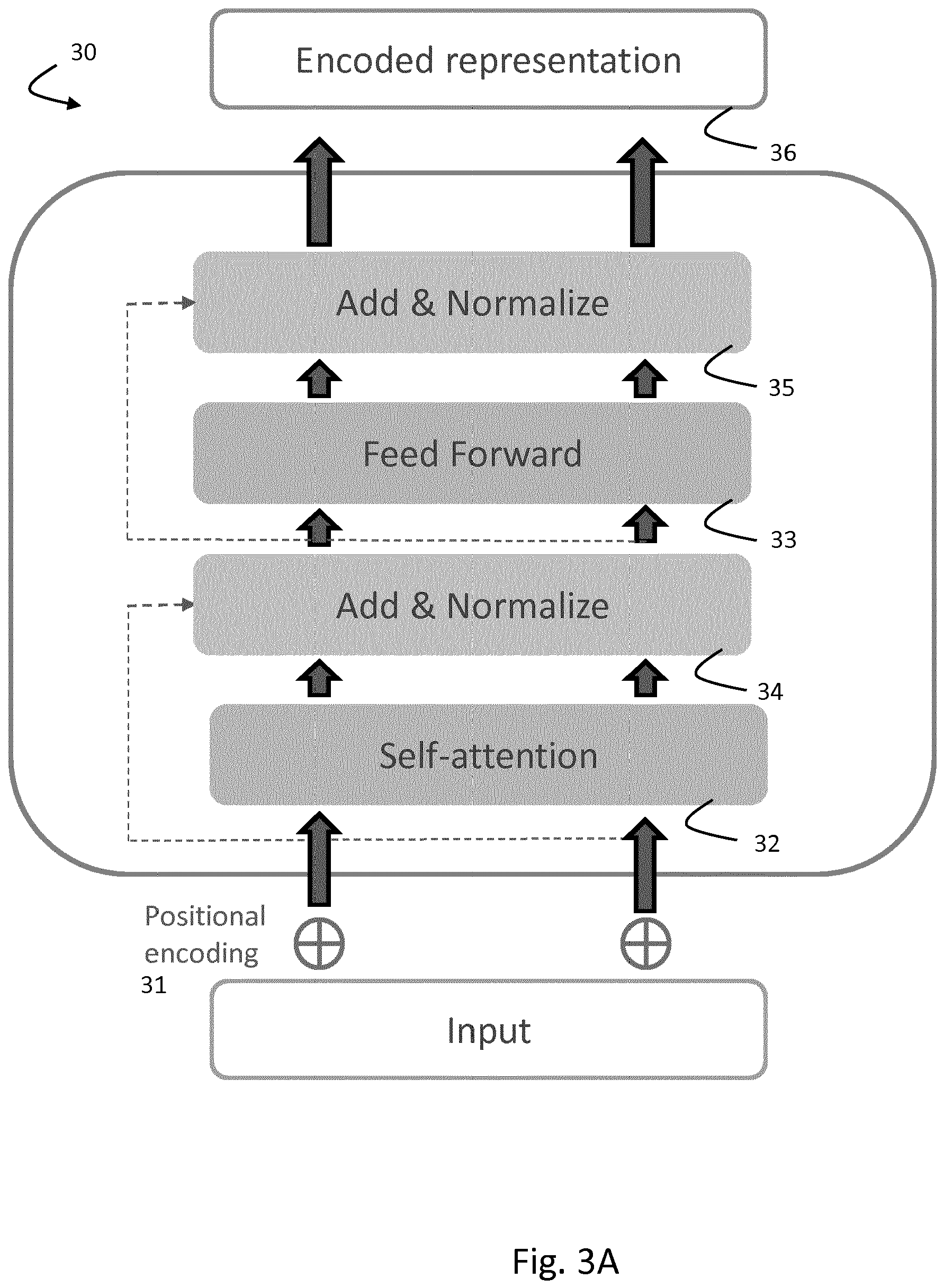 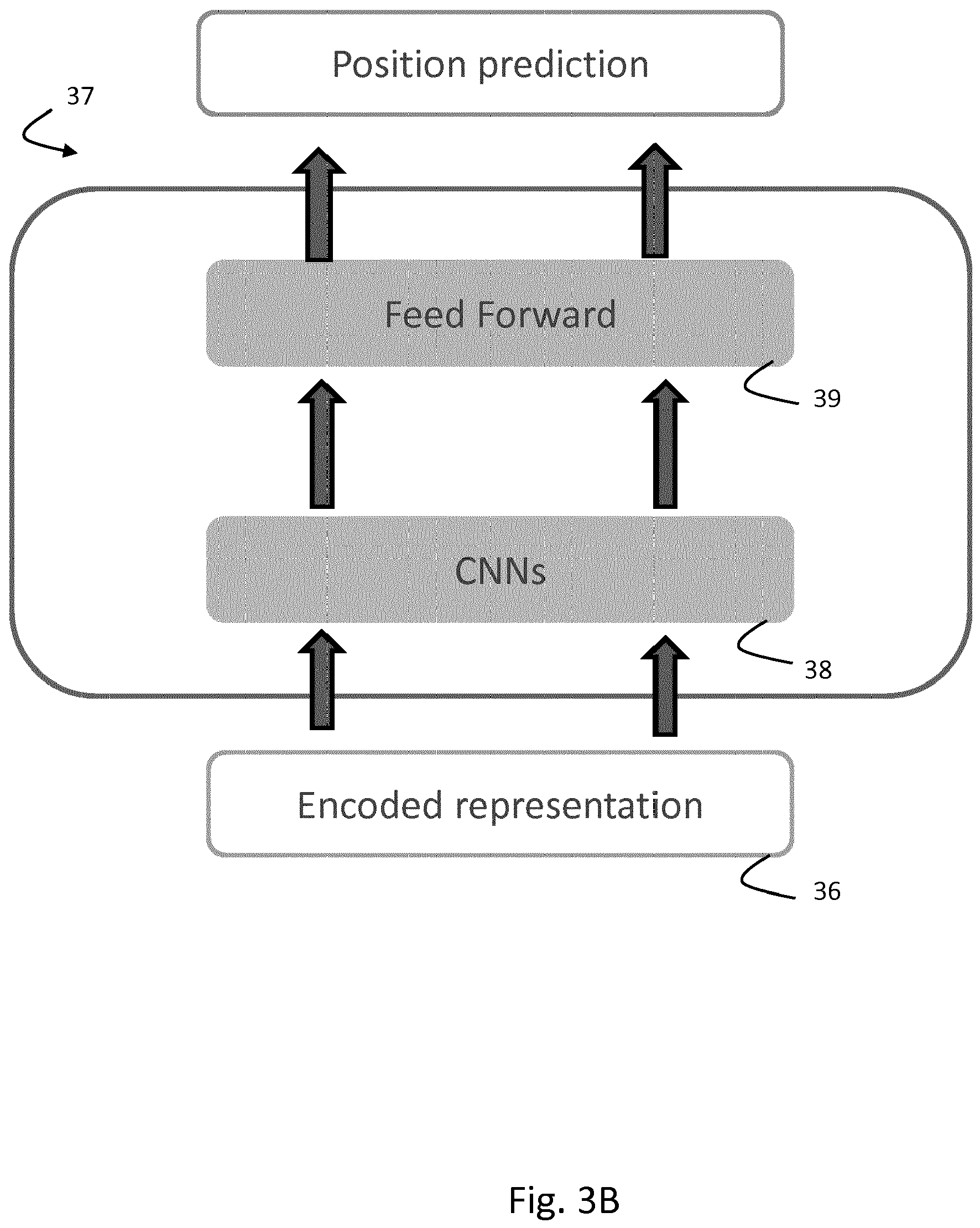 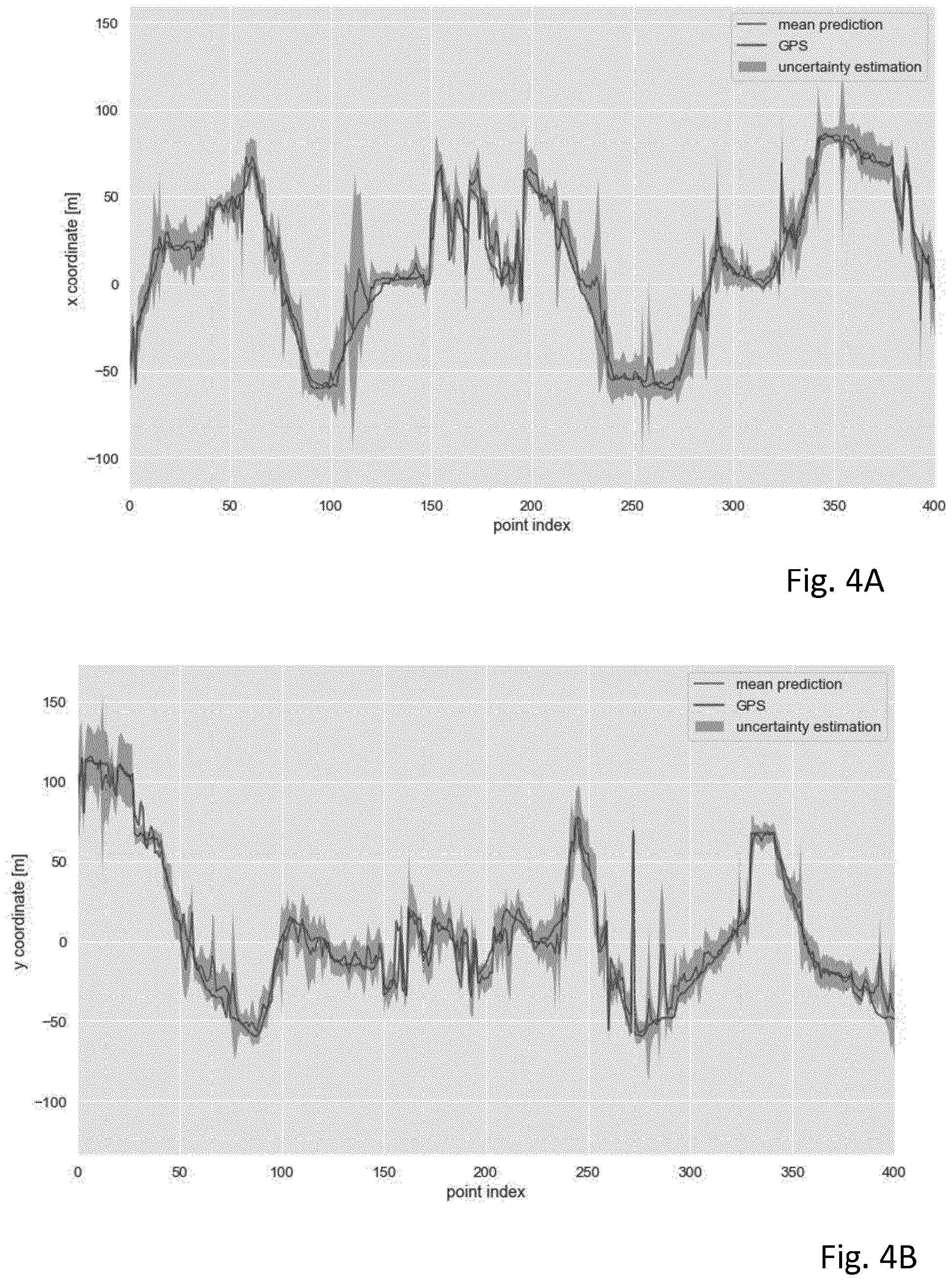 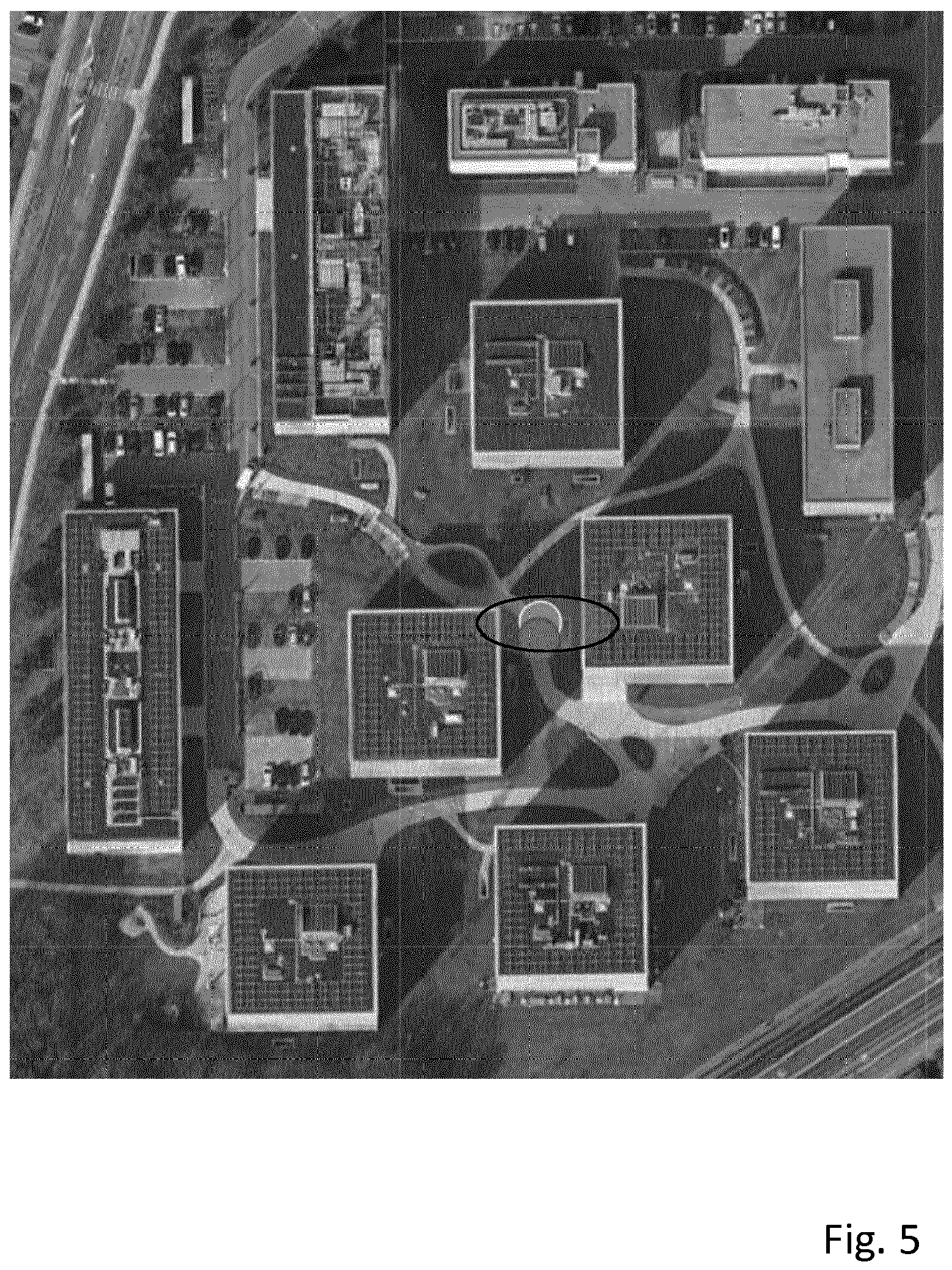 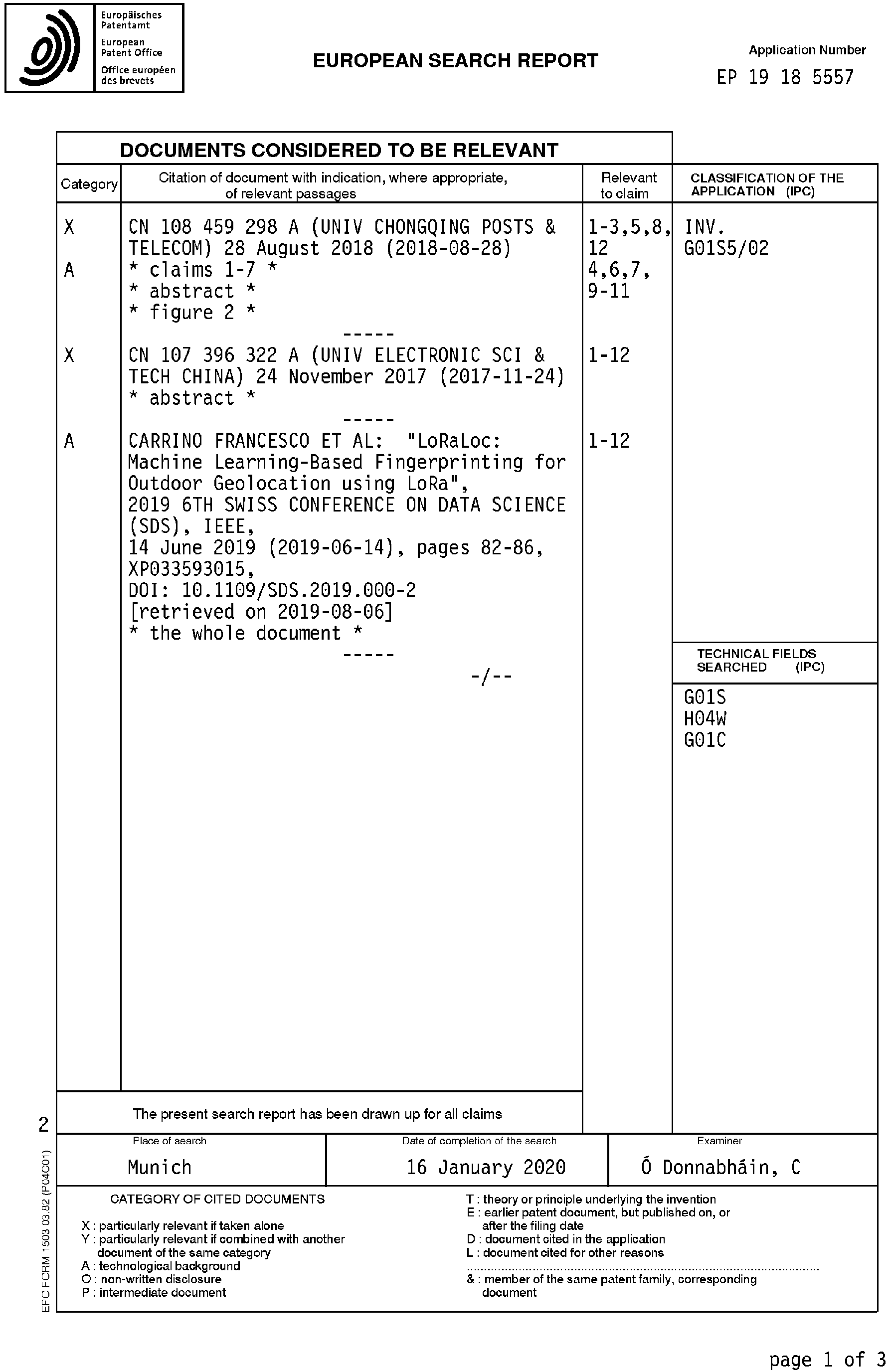 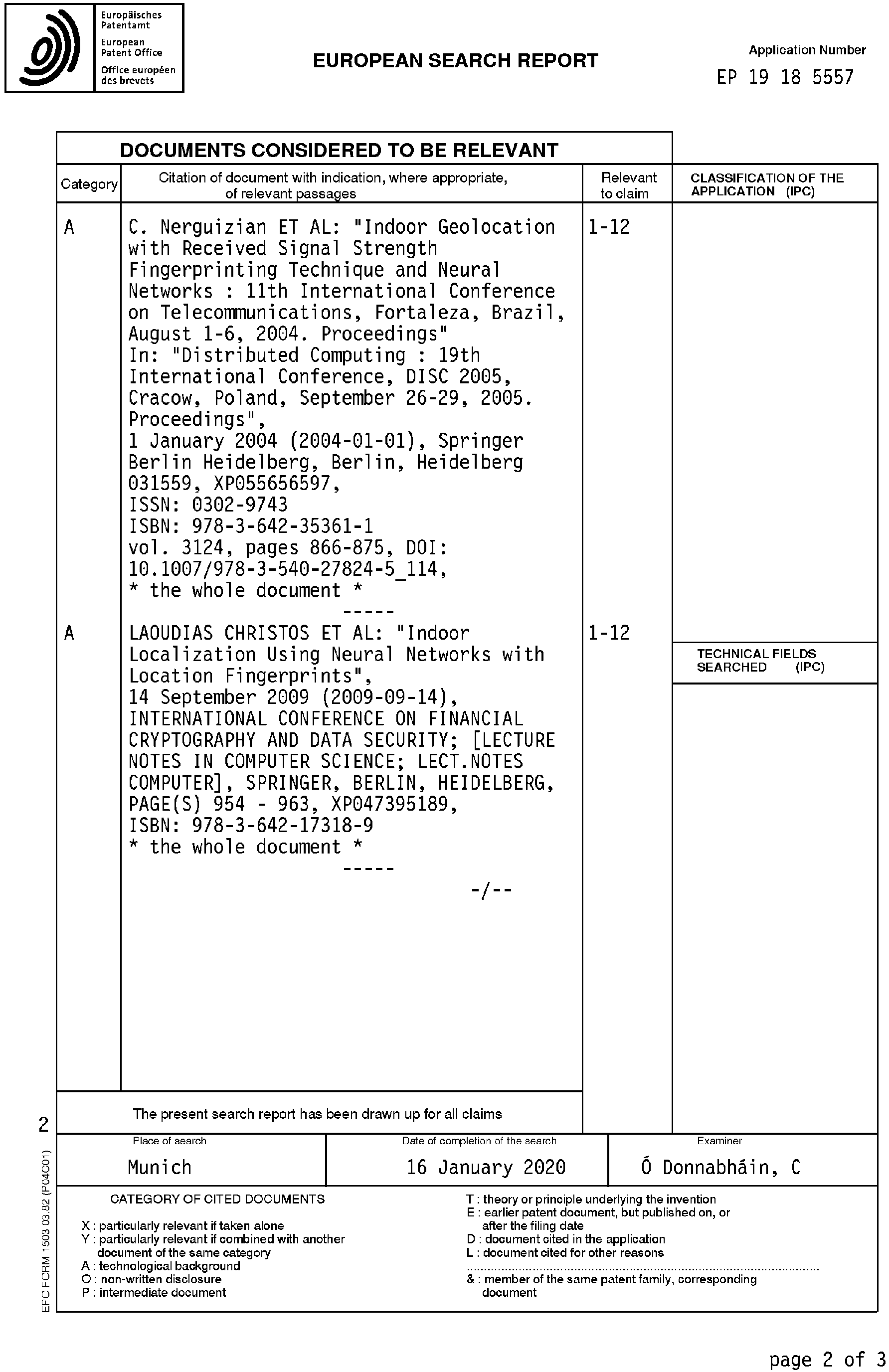 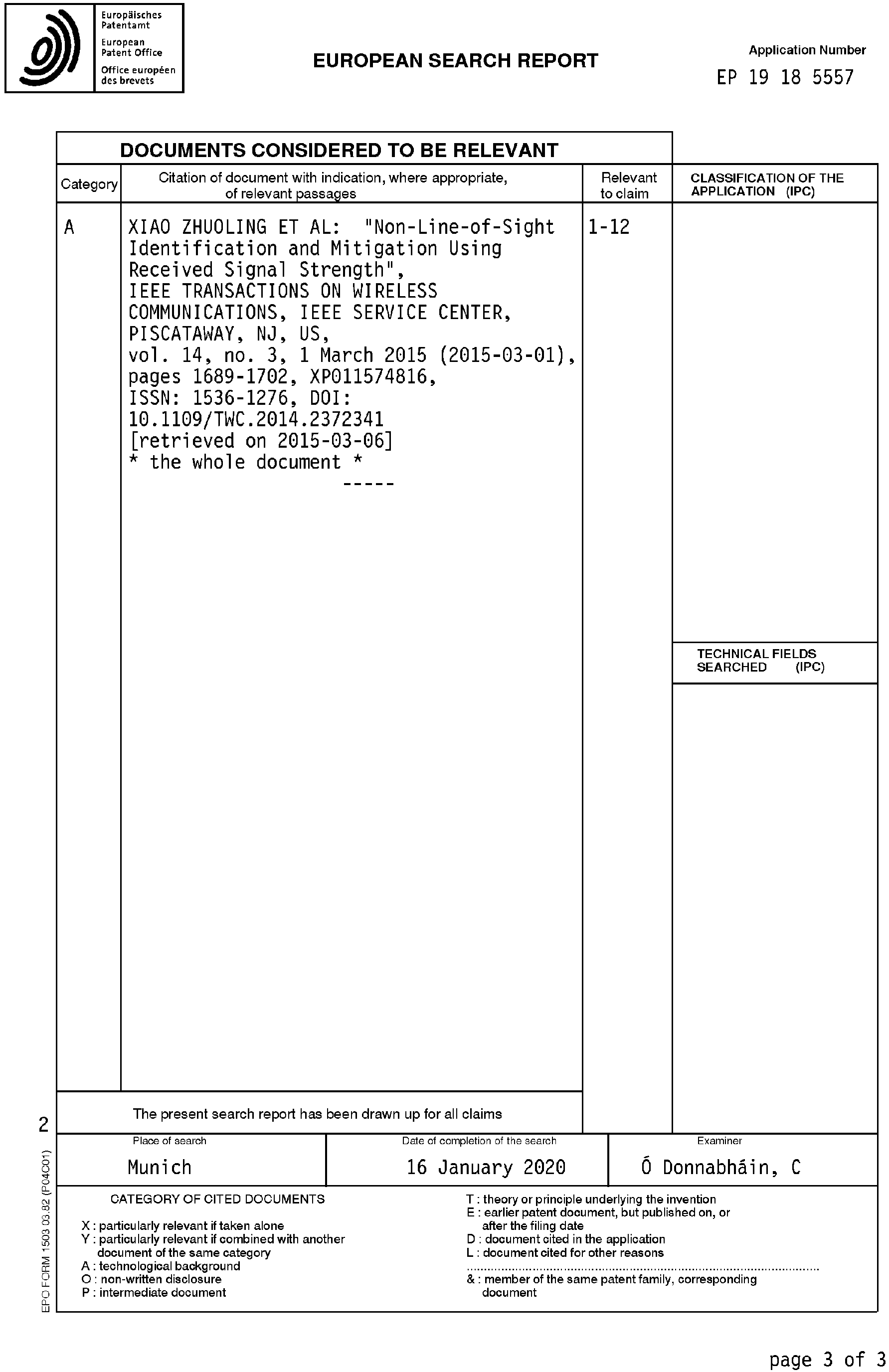 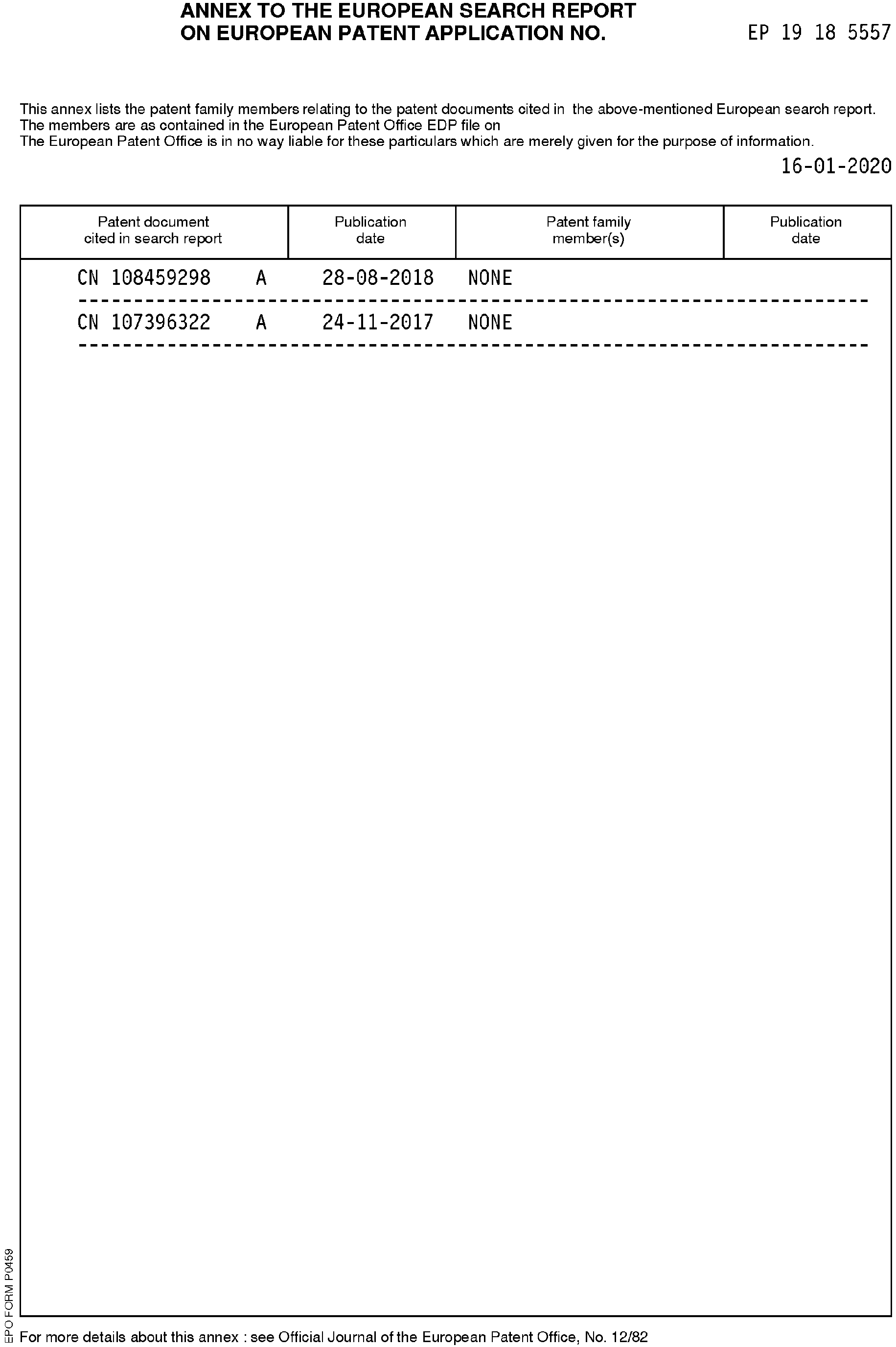