[0049] To complement the description that is being made and for the purpose of helping to better understand the features of the invention according to a preferred practical exemplary embodiment thereof, a set of drawings is attached as an integral part of said description in which the following is depicted in an illustrative and non-limiting manner:

Figure 1 shows a view of the compact equipment for extreme macro photography. The camera has not been depicted, and this example shows a light sphere as the lighting source.

Figure 2 shows an exemplary light sphere-type lighting system containing the support of the subject on a five-axis positioner.

Figure 3 shows the extension module, a piece of equipment that is external to the main unit of the equipment, for photographing subjects of several centimeters (it includes its own lighting system).

Figure 4 shows an accessory of the equipment for supporting large-sized subjects which can be installed both in the main unit and in the extension module.

Figure 5 shows an accessory of the equipment for use in ballistic photography. The base of the accessory is compatible with the platform of the main unit and with the extension module.

Figures 6A-D show several embodiments of the equipment of the invention with cameras with different optics to enable being adapted to the subject to be photographed.

Figure 8 shows a photograph of cellulose fibers in a sheet of paper (2x3 mm), 10X optic.

Figure 9 shows a photograph of marks on a bullet caused by the grooves in the barrel of a gun (2x3 mm), 10X optic.

[0080] To work with the described equipment, the configuration and suitable optic (according to the above) for the size of the subject to be photographed must first be selected and the subject must be positioned on its corresponding support (directly on the platform (3), on the positioner (9), on the first accessory, on the second accessory, on the third accessory, etc.), oriented and framed using the five-axes micrometric positioning system.
[0081] The optic used for the programming module (8) to determine the spacing between consecutive pictures, that is, the distance in microns the platform (3) will be moved between each shoot, is subsequently selected in the programming module (8). The camera (2) is subsequently moved with the rail slider until finding the first focusing point of the subject, where a point of the subject is in focus for the first time. This point is the start of the series and is selected on the touch screen. The platform (3) subsequently moves with the subject until the entire depth of photographic interest has been scanned; the last point of interest determines the end of the series (the last photograph) and is selected on the touch screen. At this time it is no longer necessary to input more data in the equipment, and all the photographs are taken. The photographs are subsequently stacked by means of suitable software to obtain the final photograph in infinity focus.
[0082] If a standard macro objective lens is used (situation without any movements), the steps to be followed are the same, with the exception of the control system being limited to shooting the series of photographs and the F-Tube ring being in charge of the movement for focusing the camera as discussed.
[0083] The present invention also describes alternative equipment which allows extreme macro photographs to be taken in a portable manner. In this case, the mounting of a 5X or 10X microscope optic on the 1X macro objective lens is considered, with the stacking being controlled in a completely automatic manner with a Helicon FB Tube ring (focus and shoot). For the portable use of the system, the use of an external locking shutter release (in addition to selecting continuous shooting in the camera) has already been described for autonomously taking the series of photographs.
[0084] In this case of portable use, the PLC-based control system is not provided; as a result, to prevent vibrations resulting from the movement of the mirror of the camera (2), the photographs can be shot in display mode in the screen of the camera (which is less suitable since the camera may generate electromagnetic noise due to heating). In this case, as long as the remote shutter release is locked, the mirror will continuously be maintained in its raised position.
[0085] The proposed equipment is proven to be effective and allows extreme macro to be performed with conventional optics. The novelty resides in the fact that by installing a microscope optic such as the one used in this equipment immediately in front of the standard 1X objective lens, it is possible to obtain photographs for the extreme macro technique. That is a considerable advantage since it allows the portable use of the technique, by installing the camera (2) on a tripod, with only the described accessories: the optic system (standard 1X objective lens and a microscope optic) and the FB Tube ring. This is of vital importance for example for the Forensic Science Service, because it allows a portable extreme macro system to be provide which can be used directly at a crime scene without having to transport the medium to be photographed to a laboratory. Up until now, in known documents of the state of the art and related literature it was indicated that this attachment of optics was not possible; however, during the process of developing the present invention it was found that high-quality extreme macro photographs can be taken using this technique.
[0086] Figures 7 to 9 show photographs taken with the equipment of the present invention. More specifically, there can be seen in Figure 7 a photograph of printing ink on a €50 bill (2x3 mm), 10X optic; in Figure 8, a photograph of cellulose fibers in a sheet of paper (2x3 mm), 10X optic; in Figure 9 a photograph of marks on a bullet caused by the grooves of the barrel of a gun (2x3 mm), 10X optic.

1. Compact equipment for extreme macro photography, characterized in that it comprises:

- a platform (3) provided on the base (5) and capable of moving relative to same, and being said platform (3) configured to support at least one subject to be photographed;

- a lighting unit (4) installed at least on the platform (3) or the module (1) and capable of moving so as to orient towards the subject to be photographed;

- a mobility unit which comprises at least one induction motor that controls the movement of the platform (3) on the base (5). 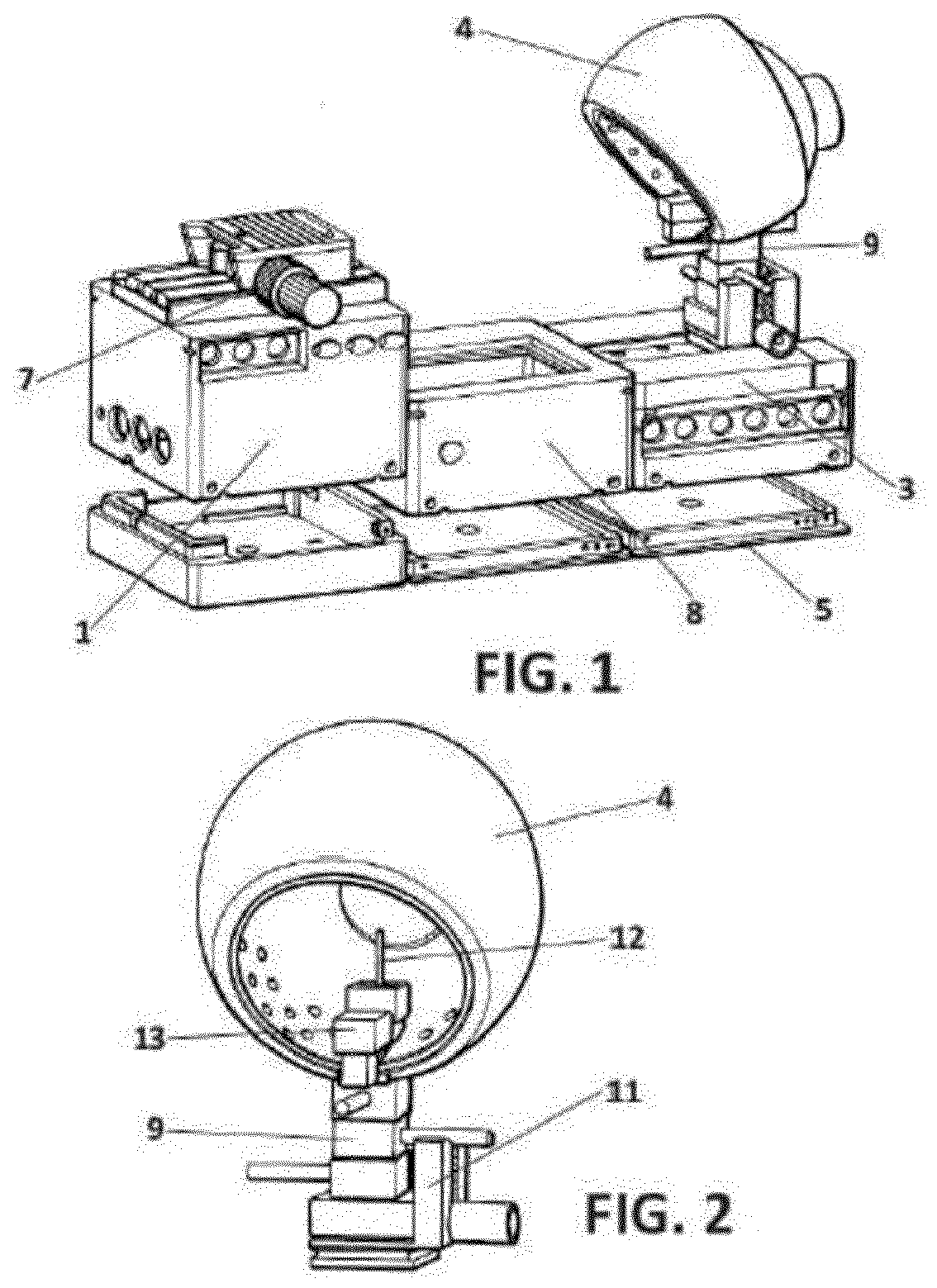 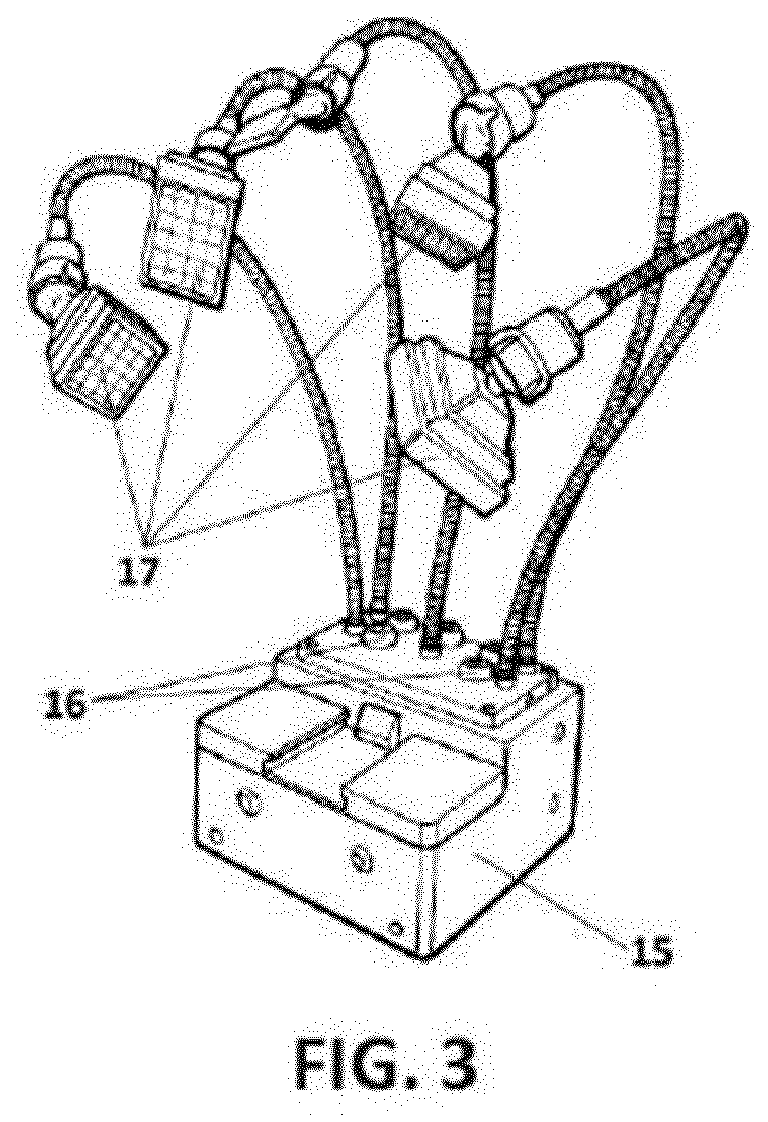 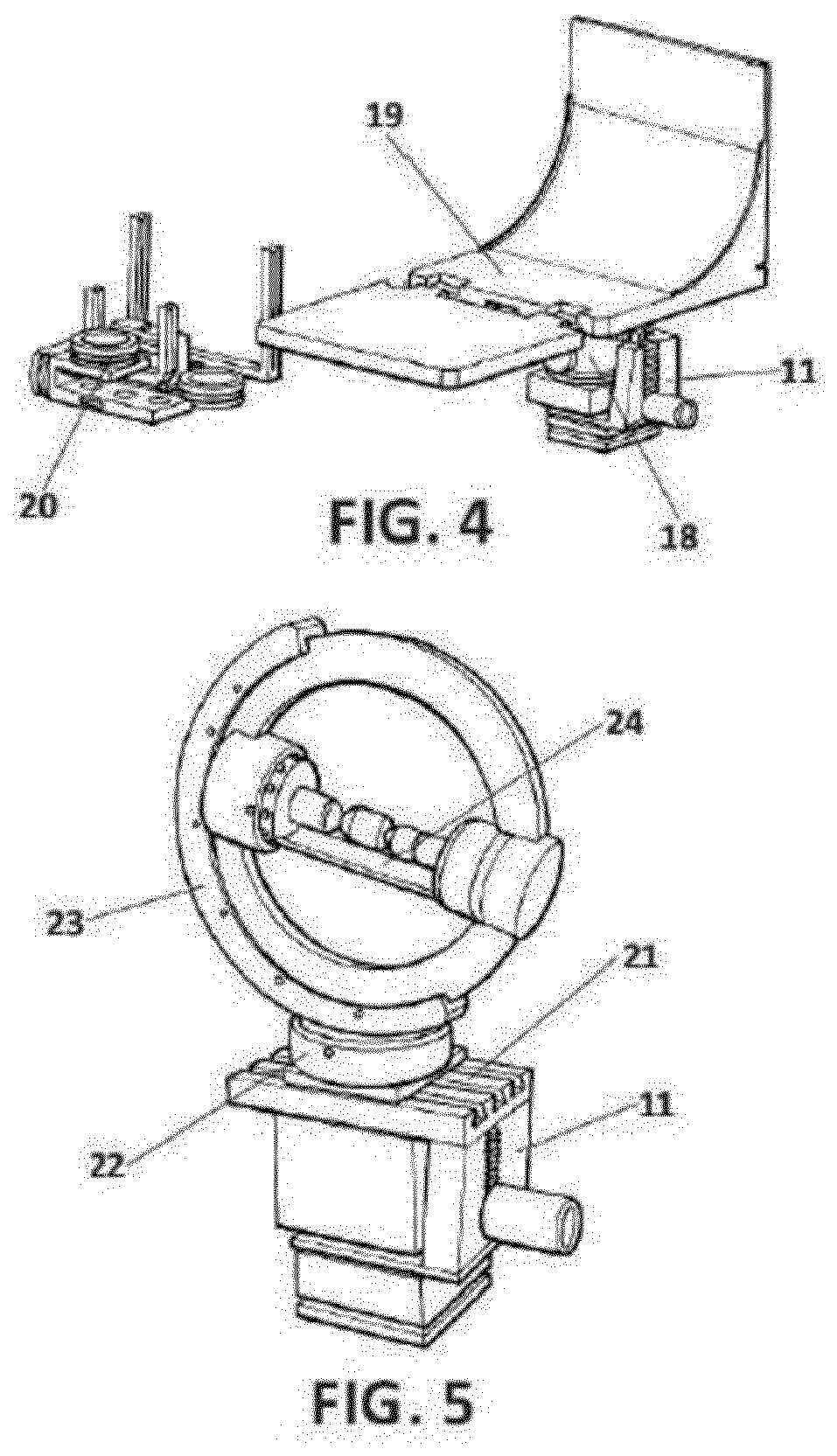 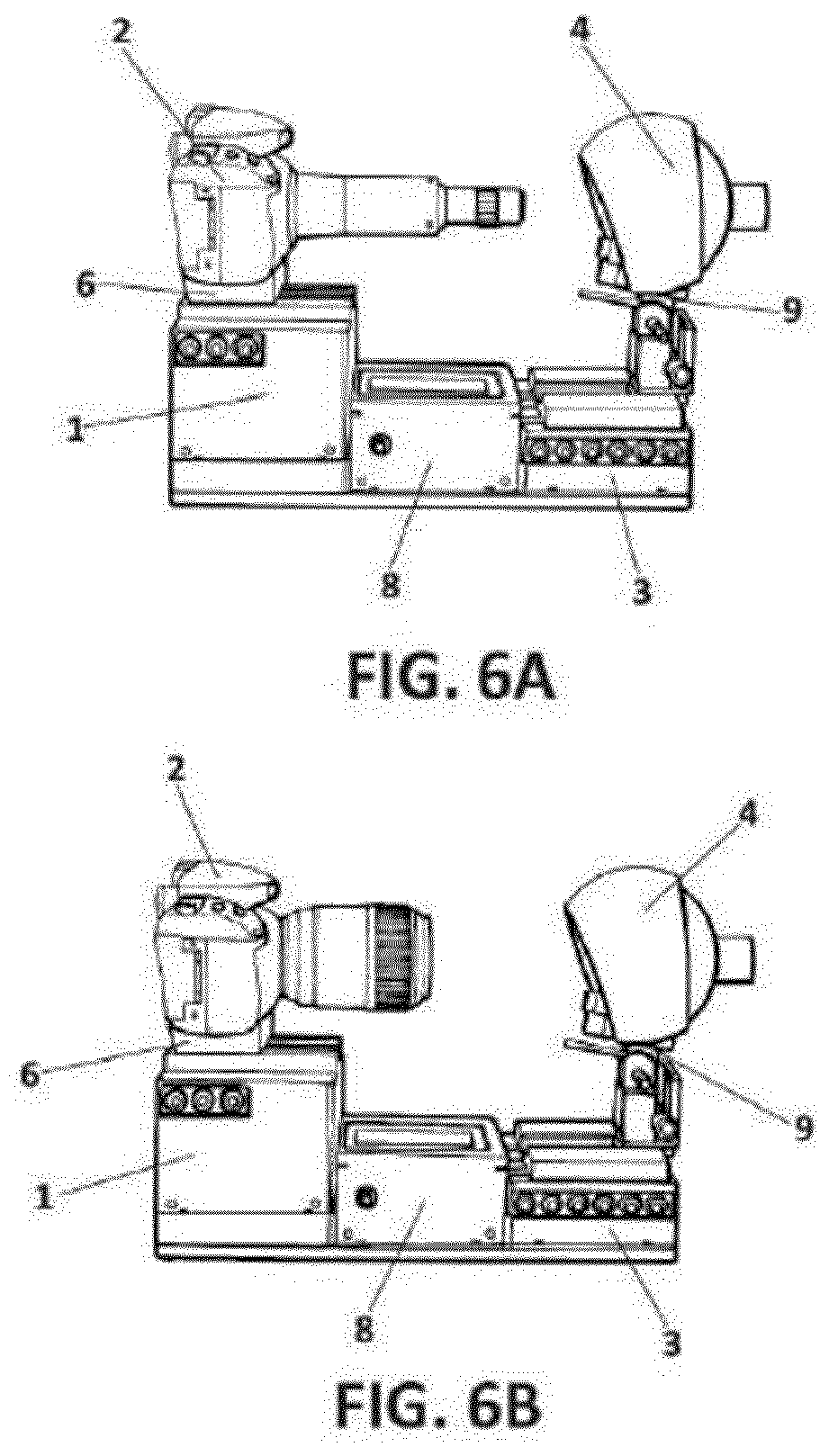 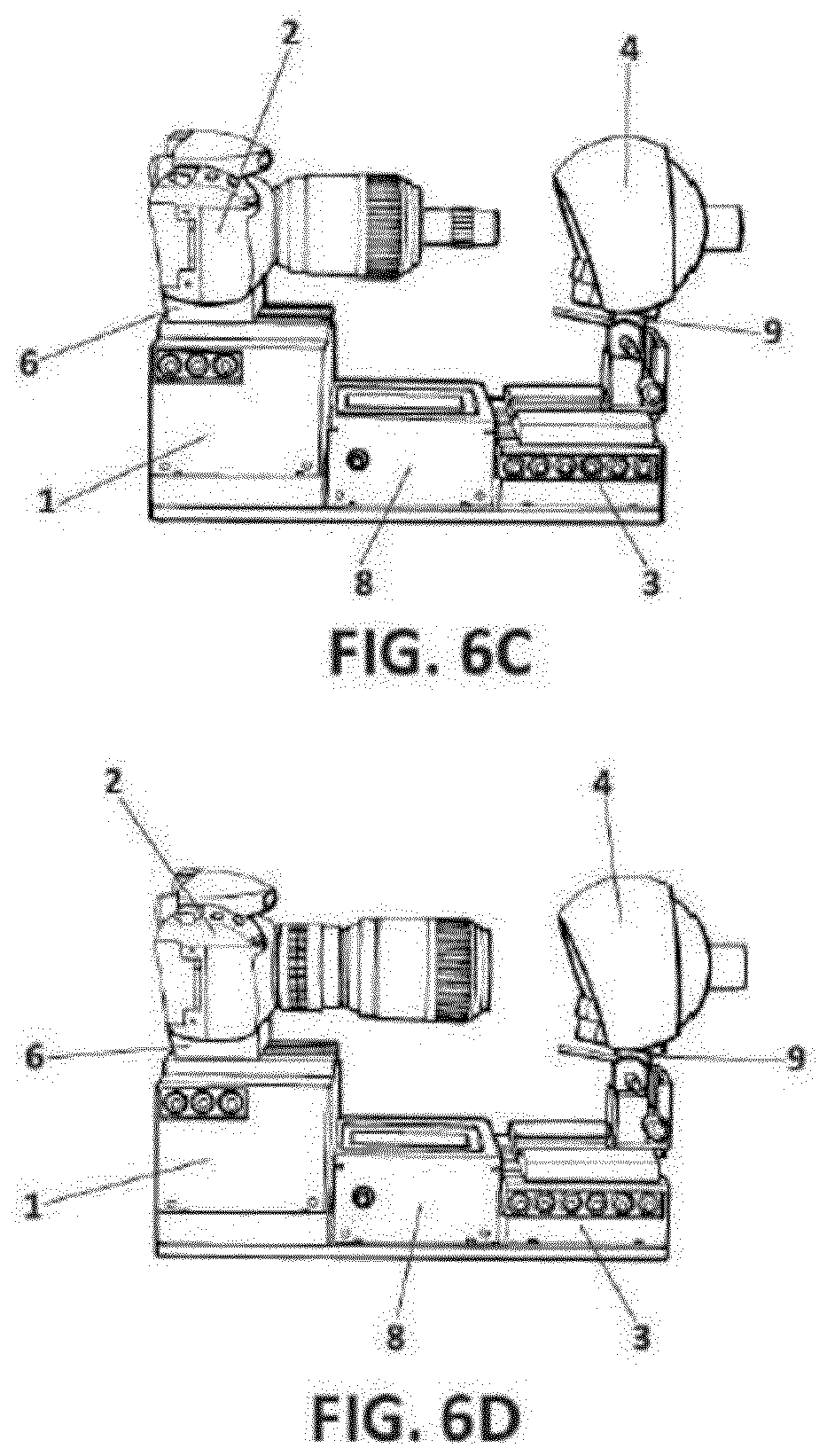 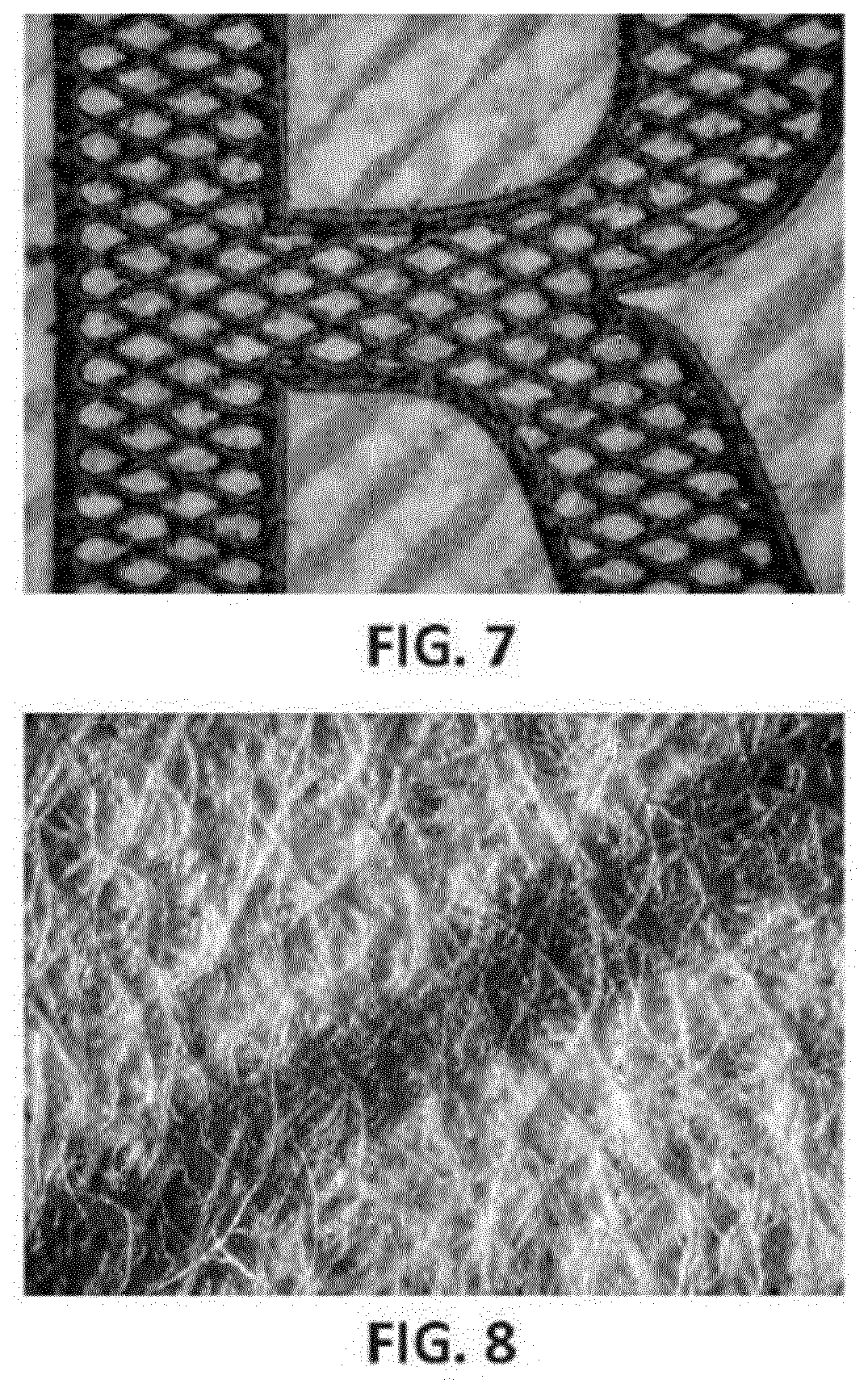 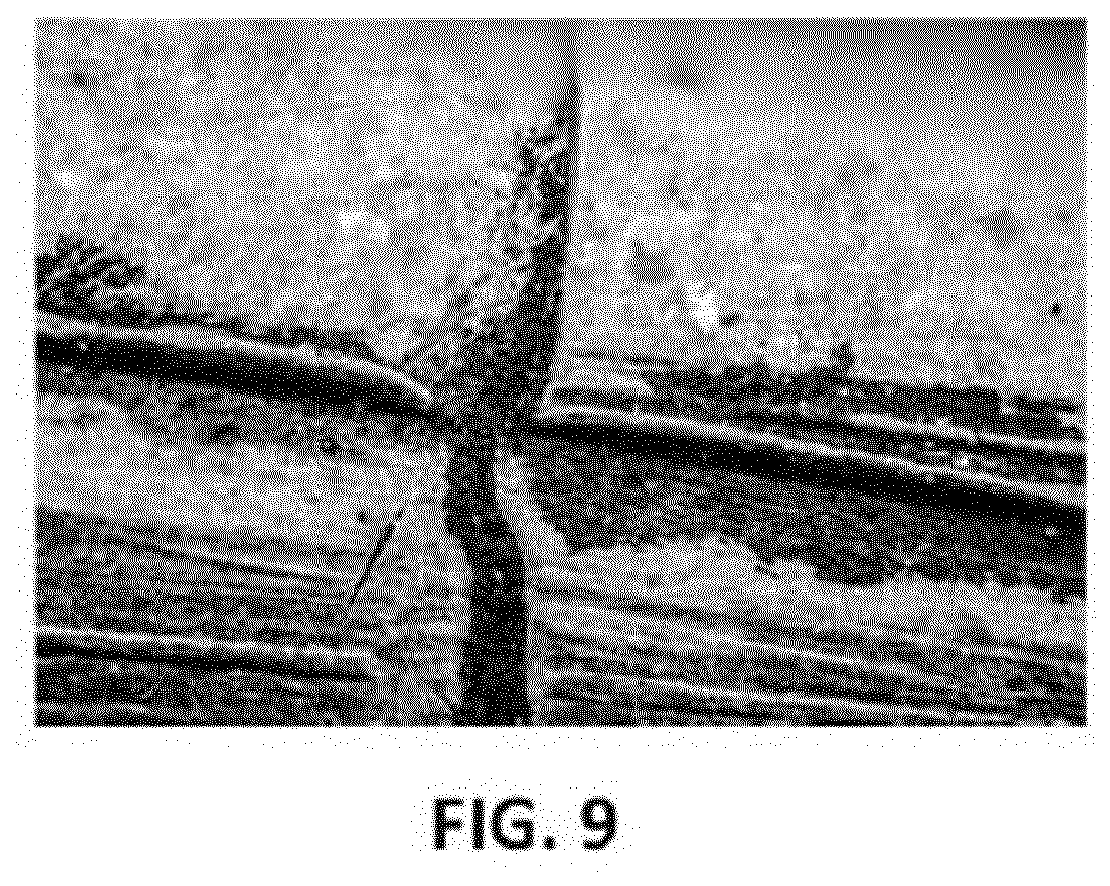 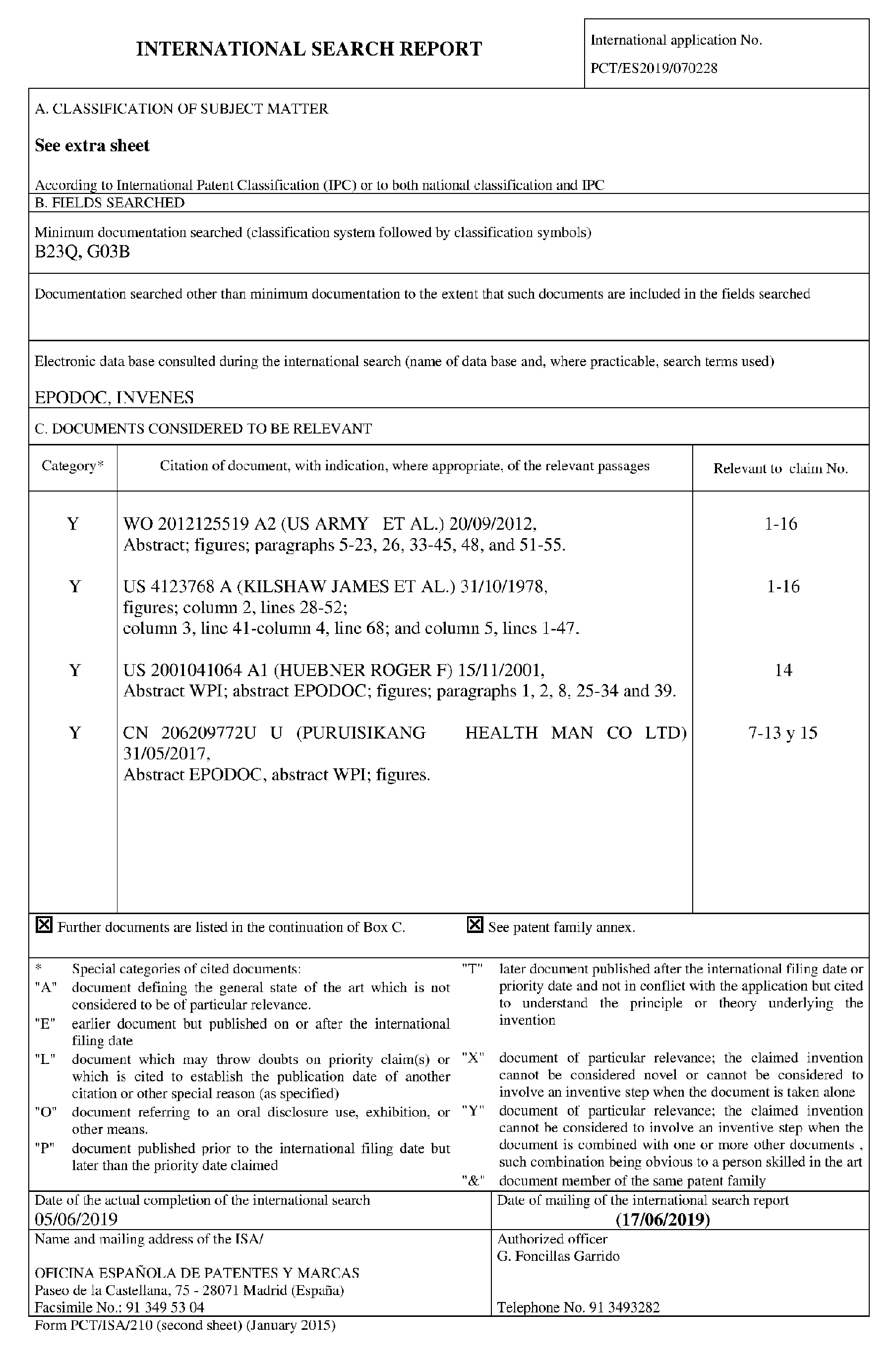 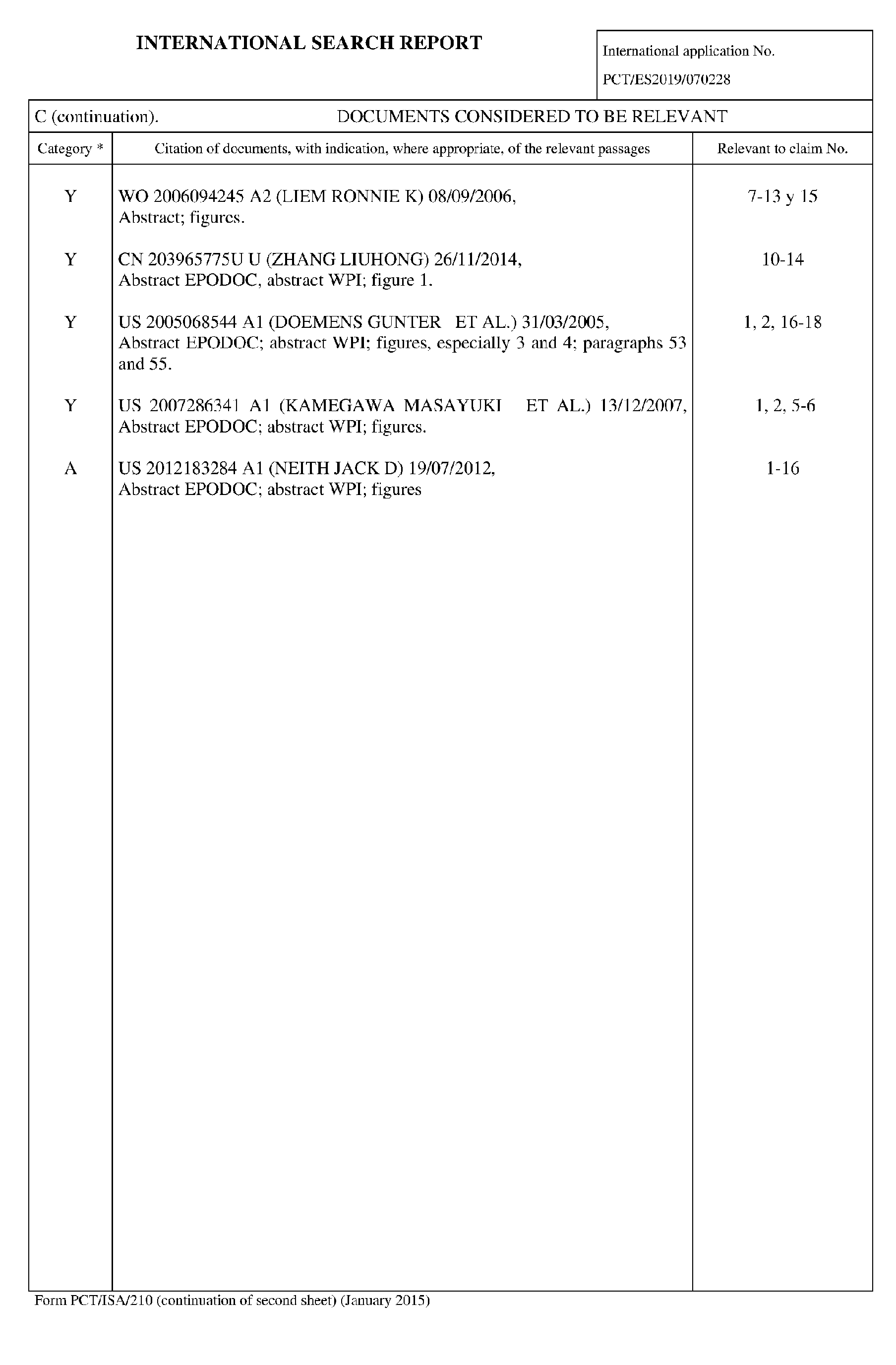 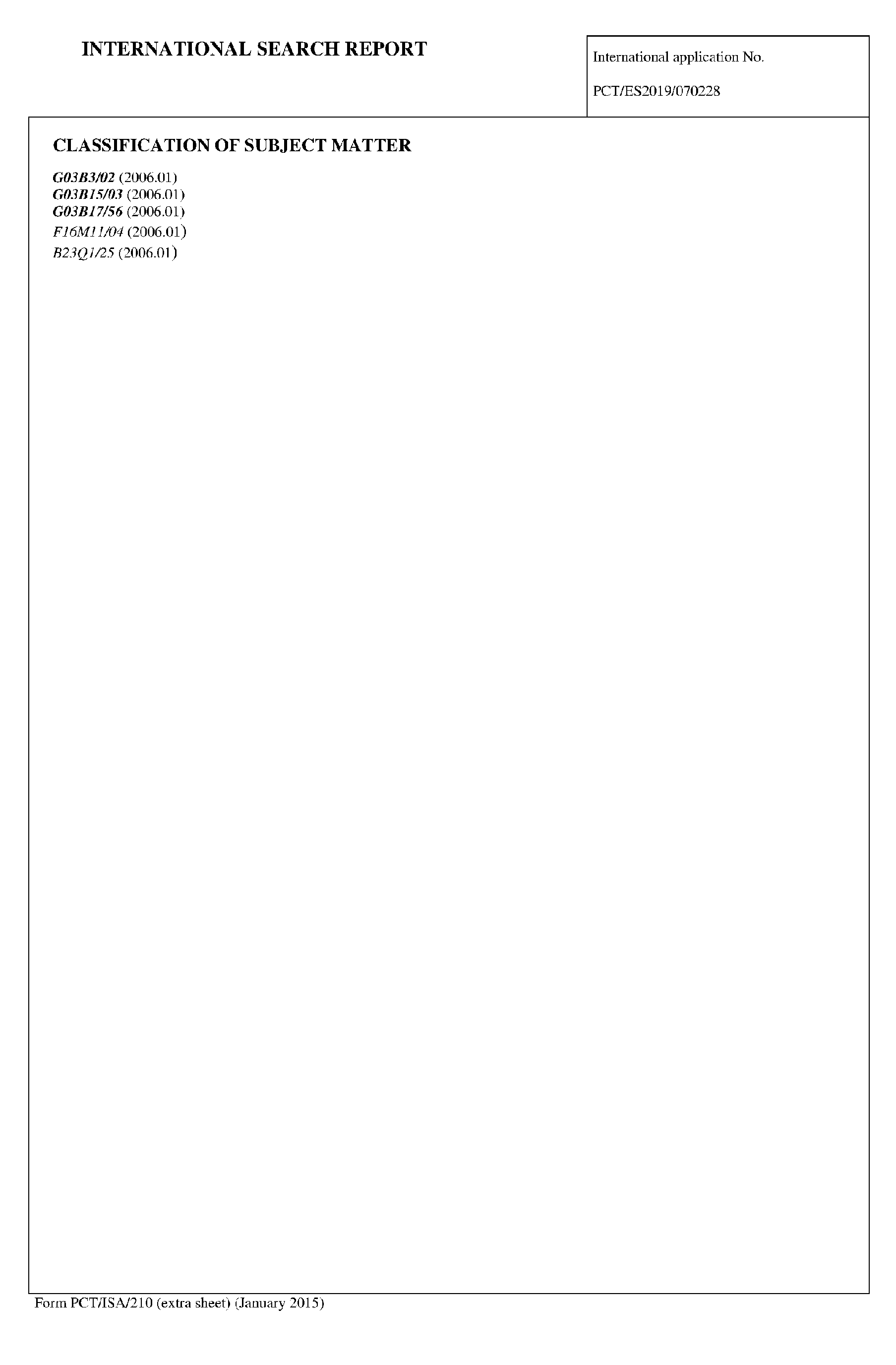 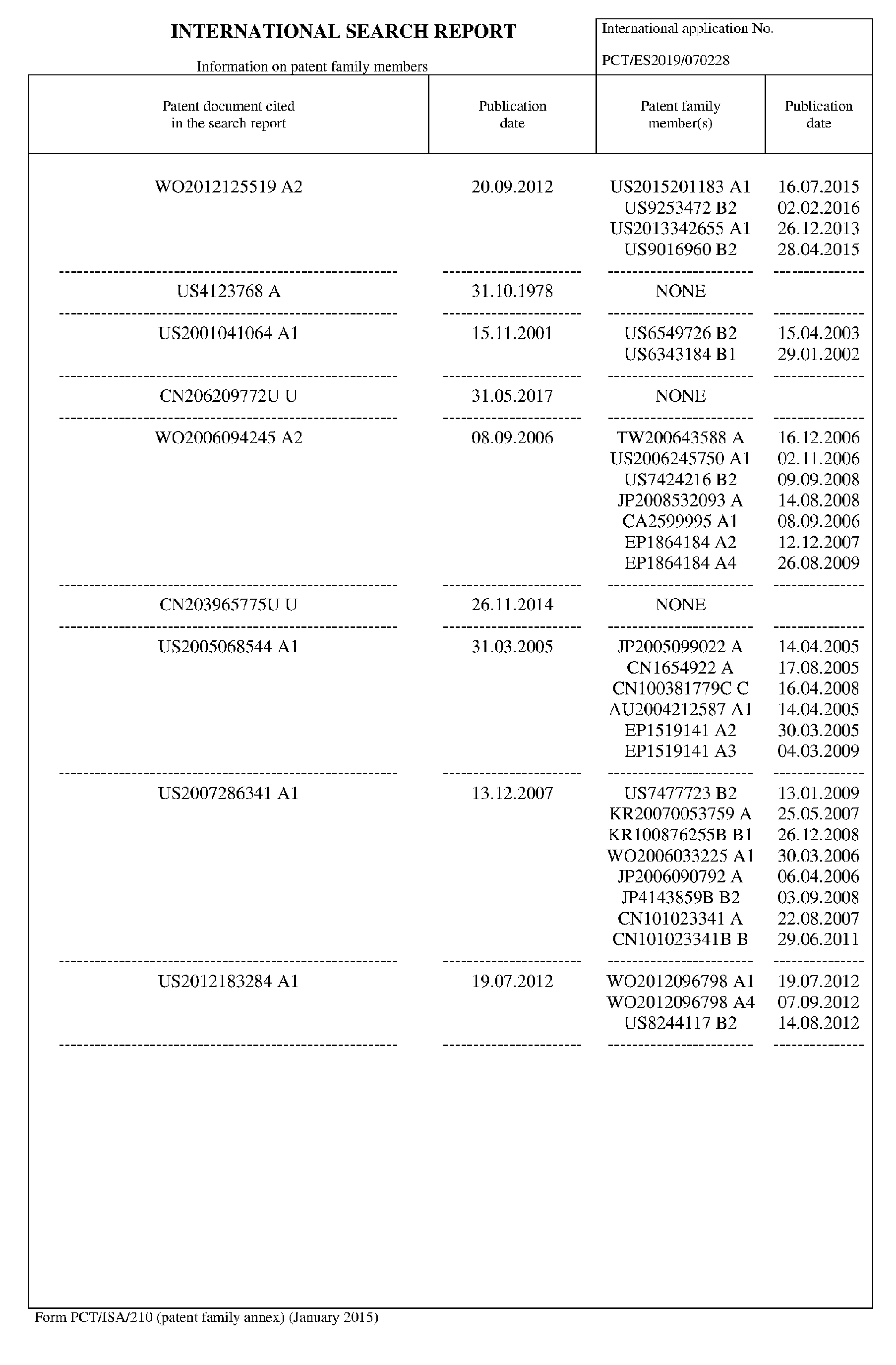