[0001] The invention concerns the design and control of opening of the bypass valve to ensure the bypass function, in particular, in hot water heating systems.

[0002] Heating devices are known in the prior art, in particular hot-water boilers, with a heat source, with a water circulation pump and with one or two heating circuits, one circuit being intended for space heating and the other circuit being intended for domestic hot water heating. In both cases, the heated water is supplied to the circuits via a common primary heat exchanger and, in the case of domestic hot water heating, is subsequently also distributed to the secondary heat exchanger.
[0003] In prior art hot water heating systems, a separate bypass valve is used to prevent damage to the heating system at high pressure differences (hereinafter only differential pressures) occurring in the system of radiators and their thermostatic heads or upon an emergency shutdown of the system.
[0004] If the bypass valve is set to a certain differential pressure, it performs a protective function in such a way that the bypass valve responds to a sudden increase in the differential pressure and opens and passes the heated heating water through the bypass channel when the set differential pressure is reached. The bypass valve ensures discharge of hot water from the primary heat exchanger inside the heating system until the heating system evaluates the situation with its own protective elements, responds and shuts off the heating mode; current heating systems have the timing set at approximately 5 seconds. This heating water discharge inside the system protects the primary heat exchanger against potential overheating and destruction.
[0005] Since each heating system is unique and characterized by a different number of radiators, filters and other additional equipment, bypass valve settings need to be adjusted so that the heating system is able to operate as efficiently as possible.
[0006] The bypass valve is connected to the system via its own connections, or it is a part of the hydraulic module and the connection to the bypass channel is realized within the module. An example of the connection of a bypass valve in a bypass channel in a heating device is disclosed, for example, in EP2835599 A1.
[0007] According to the prior state of the art, the main part of bypass valves consists of a linear compressed coil spring (further referred as linear spring) and a movably mounted sealing element (piston, plate, cone, etc.) where the uncompressed spring keeps the sealing element in the closed position. The spring bias corresponds to the required pressure at which the bypass valve opens. Different spring designs meet different requirements for the value of the differential pressure in the system. The bypass valve is equipped with a suitable linear spring to ensure required system parameters.
[0008] The spring is installed inside the valve housing and is permanently exposed to the adverse effects of hot water. Calcifications may accumulate on the spring and cause malfunctioning of the valve. The mechanical properties of the spring, such as stiffness, decrease over time due to the pressure of the medium. Moreover, changes in the heating system require replacement of the spring.
[0009] Document US3877478A also discloses a known bypass valve comprising permanent magnets.
[0010] The task of the presented technical solution is to design a valve ensuring the bypass function and able to maintain its functional properties despite negative physical influences of the hot water environment. At the same time, the new solution enhances options for setting the volume of water flowing through the bypass valve when compared to the prior art.

[0011] The invention is based on the replacement of the linear spring in the valve by another mechanism that ensures opening of the valve when the differential pressure of water is reached at its inlet. The use of the magnetic repulsive force between two like poles of two magnets represents a suitable solution. In the present technical solution, the linear spring is replaced by a pair of permanent magnets facing each other with like poles.
[0012] The opening pressure of the bypass valve is thus set based on the distance between the two magnets where the permanent magnet placed in the aqueous environment is made of a water-resistant material or has a water-resistant surface treatment.
[0013] The magnetic force between the permanent magnets is permanent, continuous, and adjustable. For example, neodymium magnets are excellently resistant to external demagnetizing influences and maintain a permanent magnetism level under normal conditions.
[0014] By using permanent magnets, it is possible to eliminate the problem that causes wear or damage to the spring exposed to the aqueous environment.
[0015] To set the function of the valve and the volume of water flow through the valve, it is necessary to know the characteristics of the force required to compress the spring or bring two magnets closer.
[0016] Linear springs are characterized by linearly increasing spring resistance that results from increasing compression of the spring. Progressive springs represent another type and they change their resistance to increasing pressure slowly at the beginning and then faster (steeper), i.e. exponentially.
[0017] A comparison of the characteristics of linear and progressive springs is shown in Figure 1. The graph shows the dependence of the amount of force required to compress the spring on the distance of the ends of the springs (extension).
[0018] It is known that the characteristics of the force required to overcome the distance between two magnets facing each other with like poles is comparable to the characteristics of a progressive spring.
[0019] With the complete replacement of the linear spring by a pair of magnets, due to this characteristic as shown in Figure 1, the bypass valve would operate in a smaller working range than with the linear spring, the steep part of the characteristic could not be used.
[0020] Therefore, in the present solution, a two-stage valve control based on the distribution of working pressures is advantageously used.
[0021] A linear spring located outside the water environment in the watertight cassette is added to the pair of magnets in the construction of the valve. This arrangement results in better sensitivity within the process of desired pressure setting.
[0022] The first stage of valve opening will depend on the setting of the mutual distance between the permanent magnets; the distance between the permanent magnets can be set to values corresponding to the water pressure, e.g. 17 kPa, 25 kPa or 35 kPa J Z . The permanent magnets used then have corresponding parameters indicating the magnetic force, i.e. from N35 to N55.
[0023] The second stage of valve opening will depend on the characteristics of the used linear spring located outside the aqueous environment; its setting may correspond, for instance, to working pressures, e.g. from 40 to 70 kPa . The linear spring can be preset accordingly to the circulation pump discharge and its bias may be changed by means of a threaded plug which closes the waterproof cassette.
[0024] The resulting opening characteristics of this two-stage fluid pressure controlled valve is shown in Figure 2, the opening characteristics for two different spring bias settings being indicated.

[0025] The invention is explained in more detail with the help of pictures but without limitation to them:

Figure 4 - Shows schematically a bypass valve model according to the presented invention in three working phases:

a) the bypass valve is closed

Description of the embodiment example

- a piston (7), which is is movably arranged in the valve chamber (2), comprising a sealing surface resting on the wall of the valve housing (1) and on the inlet opening (3),

wherein the piston (7) is provided with the first permanent magnet (5) being arranged on the side of the piston (7) facing away from the inlet opening (3), and 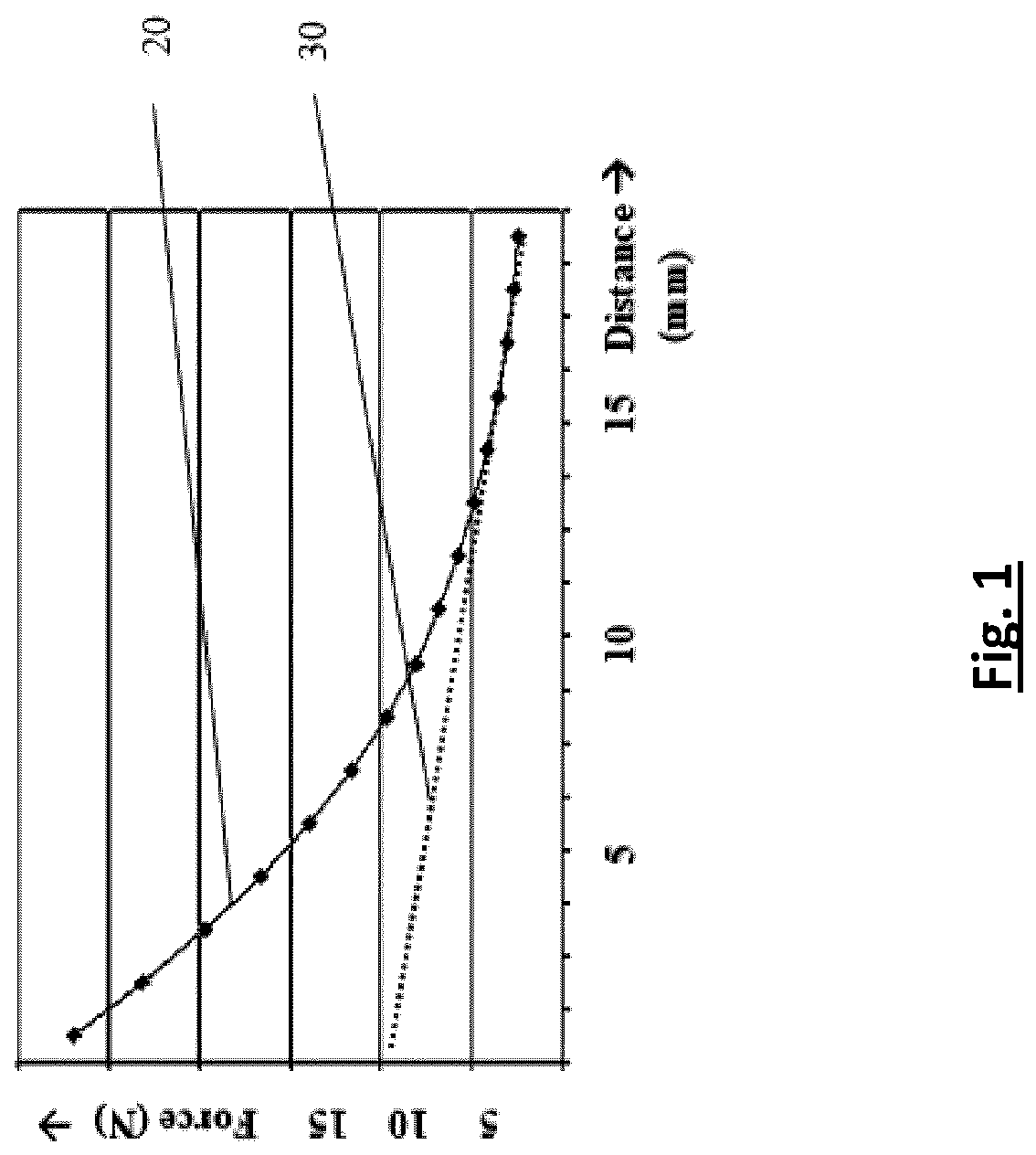 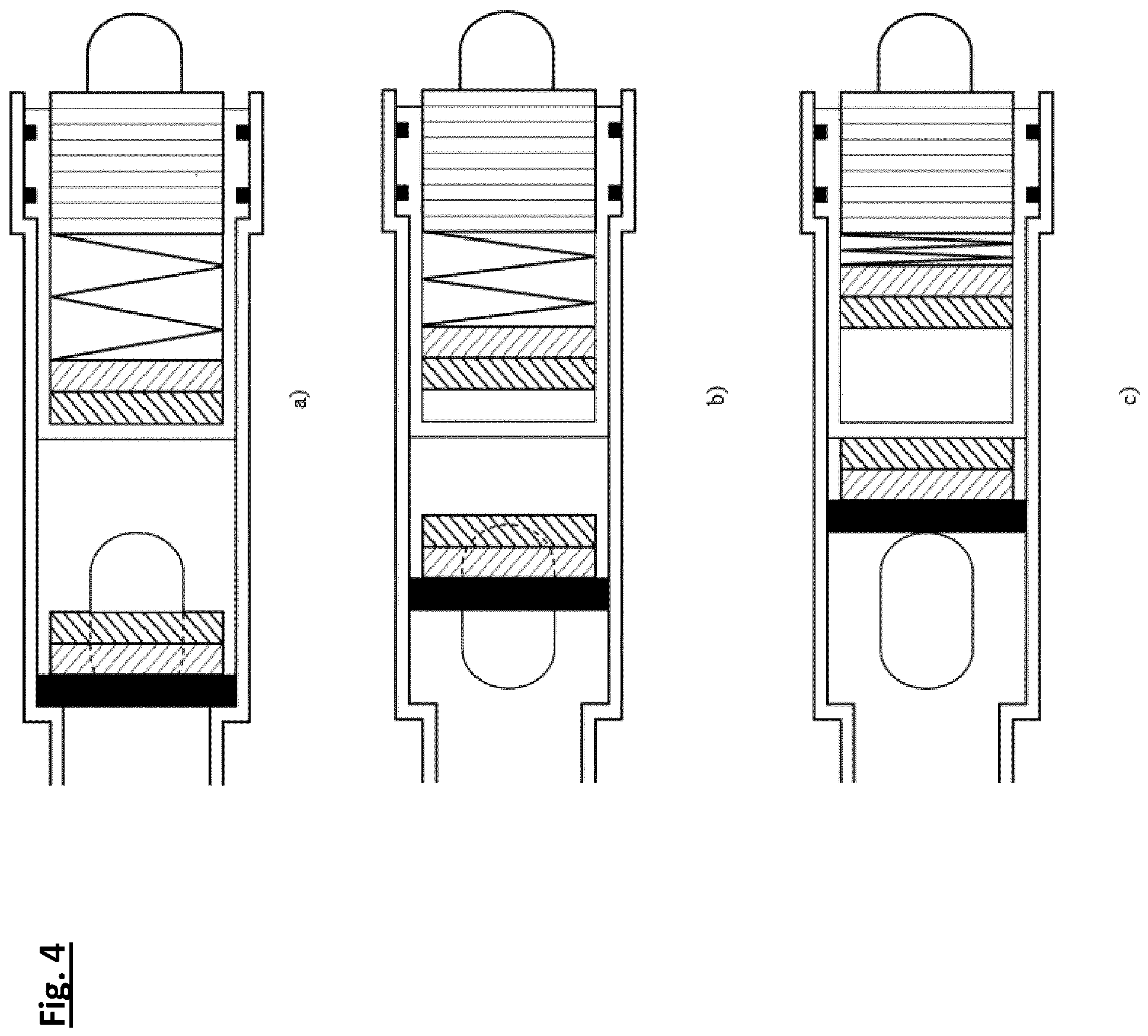