[0002] When two images of an environment are acquired at two different times, the difference between the images may reveal a moving object in the environment. The differences between the images can be calculated using known techniques such as dense optical flow (DOF). DOF produces an output indicating the differences in the location of pixel regions between the images. From this output, the motion of objects in the images may be assessed. For images taken from the same camera pose, this assessment is straightforward because differences between the images will be due to moving objects. When the camera pose changes between images, the analysis is more complex. However, methods to perform this complex analysis are known, such as described in the article "Spherical formulation of moving object geometric constraints for monocular fisheye cameras" published by L. Mariotti and C. Hughes for the 2019 IEEE Intelligent Transportation Systems Conference.
[0003] The outcome of this complex analysis is an image of the likelihood of motion. From this image, the regions in a camera image likely to correspond to moving objects can be identified. One way this identification may be performed is described in "coherent motion segmentation in moving camera videos using optical flow orientations" by M. Narayana et al, in page 1577 of the Proceedings of the IEEE International Conference on Computer Vision, 2013, 1577.
[0004] "Unsupervised flow-based motion analysis for an autonomous moving system" by A. M. Pinto et al. in Image and Vision Computing 2014, 32(6-7), 391, relates to a machine learning approach to motion analysis of DOF images for robotic systems with real-time constraints, and focuses on a surveillance scenario where a mobile robot uses a monocular camera.
[0005] "Visual motion perception for mobile robots through dense optical flow fields" by A. M. Pinto et al. in Robotics and Autonomous Systems 2017, 87, 1, relates to a machine learning approach to distinguish regions with distinct motion models. It extracts the moving objects by retrieving and describing motion properties of a flow field and using these properties to guide segmentation.
[0006] "A motion descriptor based on statistics of optical flow orientations for action classification in video-surveillance" by F. Martinez et al, In Multimedia and Signal Processing 2012, 267, describes using a motion descriptor to classify human activity classification in video-surveillance applications.
[0007] In US2019/0164296 is described a method to determine, in a loop, a plurality of motion vectors for an image.
[0008] It is an object of the present invention to detect motion in images without the limitations of this related work.

[0009] The present invention is defined by the independent claim.
[0010] Embodiments of the present invention provide a method to accurately identify regions in camera images that correspond to moving objects. The method enables data from a single wide field of view (FOV) camera mounted on a moving vehicle to detect object motion in the environment surrounding the vehicle.
[0011] The dependent claims provide further optional features.

[0012] Embodiments of the invention will now be described, by way of example, with reference to the accompanying drawings, in which:

Figure 1 shows an example environment with a moving vehicle, a static object, and a moving object;

Figure 2 shows a method to identify and report moving objects;

Figure 3 shows an image demonstrating the output of a dense optical flow evaluation of two images taken from a camera mounted on a moving vehicle;

Figure 4 shows a cell matrix overlaid on an image from a camera module on a vehicle;

Figure 6 shows an image in which regions corresponding to moving objects are labelled, the labelling has been performed using a motion likelihood calculation;

Figure 8 shows an image in which regions corresponding to moving objects are labelled, the labelling has been performed using a filtered motion likelihood calculation;

Figure 9A shows part of a cell matrix with the corresponding regions in the horizontal flow information;

Figure 9B indicates the result of region growing assessments using the data shown in figure 9A; and

Figure 10 shows the flow diagram that is followed during the region growing process.

1. A computer- implemented
method for identifying moving objects in an imaged environment comprising:

acquiring a third camera image, from the camera (2), at a third pose at a third time, the third time being after the second time;

forming (100) a first optical flow map from the first camera image and the second camera image;

selecting a plurality of flow information values from a region of the second flow map corresponding to said location;

aggregating the plurality of flow information values and, using a pose change between said second and third poses, forming a motion likelihood value for said location;

calculating a covariance matrix for horizontal and vertical flow values in the plurality of flow information values;

summing the eigenvalues of the covariance matrix into a summed value, λ; and

multiplying the motion likelihood value by 1/(1 + ωλ2), where ω is an adjustable parameter.

labelling values (150) in the motion likelihood image above a threshold as corresponding to moving objects; and

7. The method of claim 6, wherein horizontal flow values in the second optical flow map are aggregated into a two-dimensional array, and
wherein labelling values (150) in the motion likelihood image above a threshold as corresponding to moving objects comprises:

identifying positions in the motion likelihood image with a value above a threshold as a seed location;

for each position in the array at a seed location, labelling the array position with a region number; and

growing the regions by, repeatedly:

has no other region label assigned;

has a valid horizontal flow value;

has a horizontal flow value greater than a growing threshold; and

in the upward direction, below a first local threshold;

in the downward direction, positive and below the first local threshold.

12. A vehicle comprising a camera module, the camera module operating according to any preceding method.
13. The vehicle of claim 12, further comprising a vehicle control mechanism configured to receive a report of the identified regions of the motion likelihood image corresponding to moving objects and to take this information into account when controlling the vehicle. 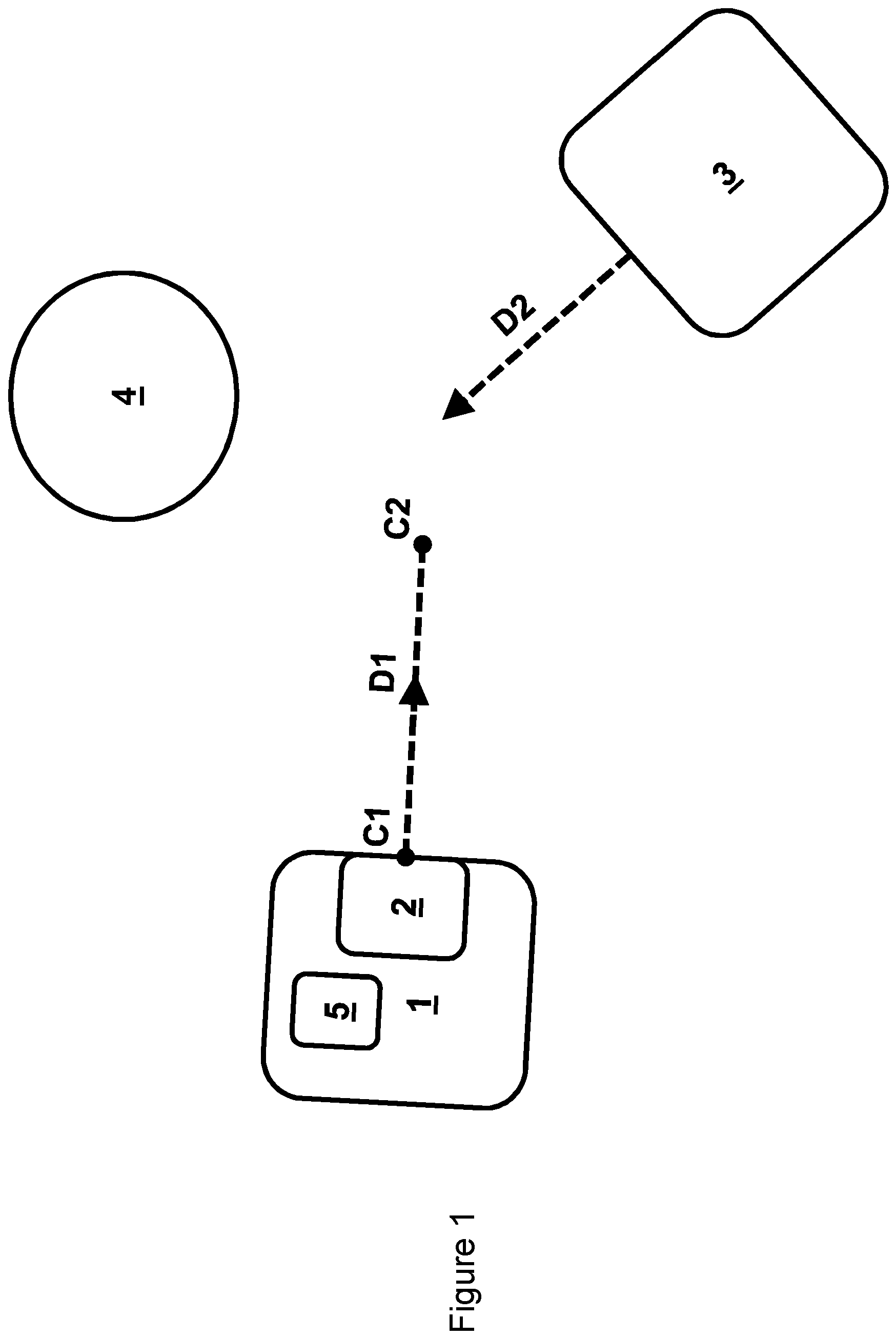 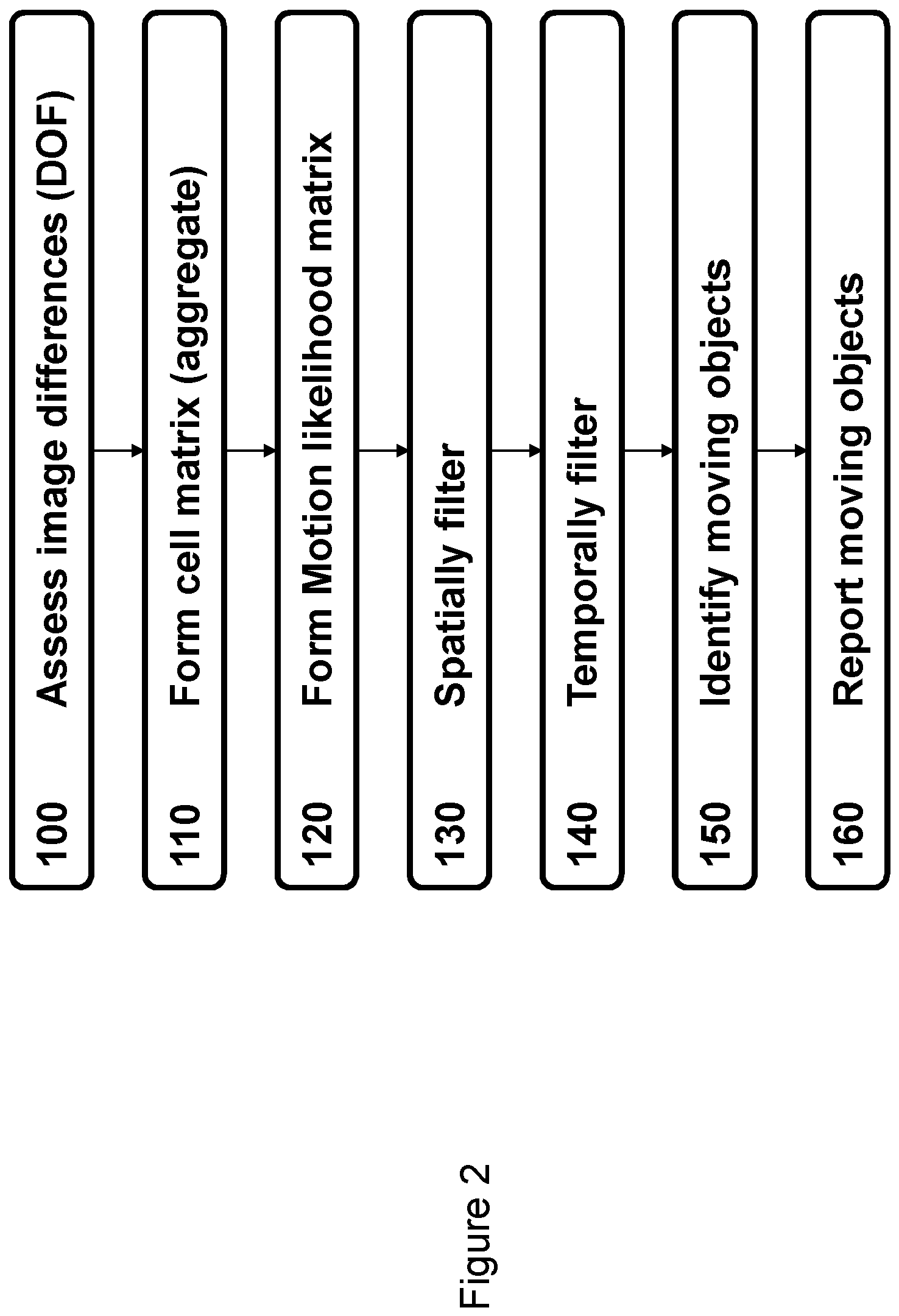 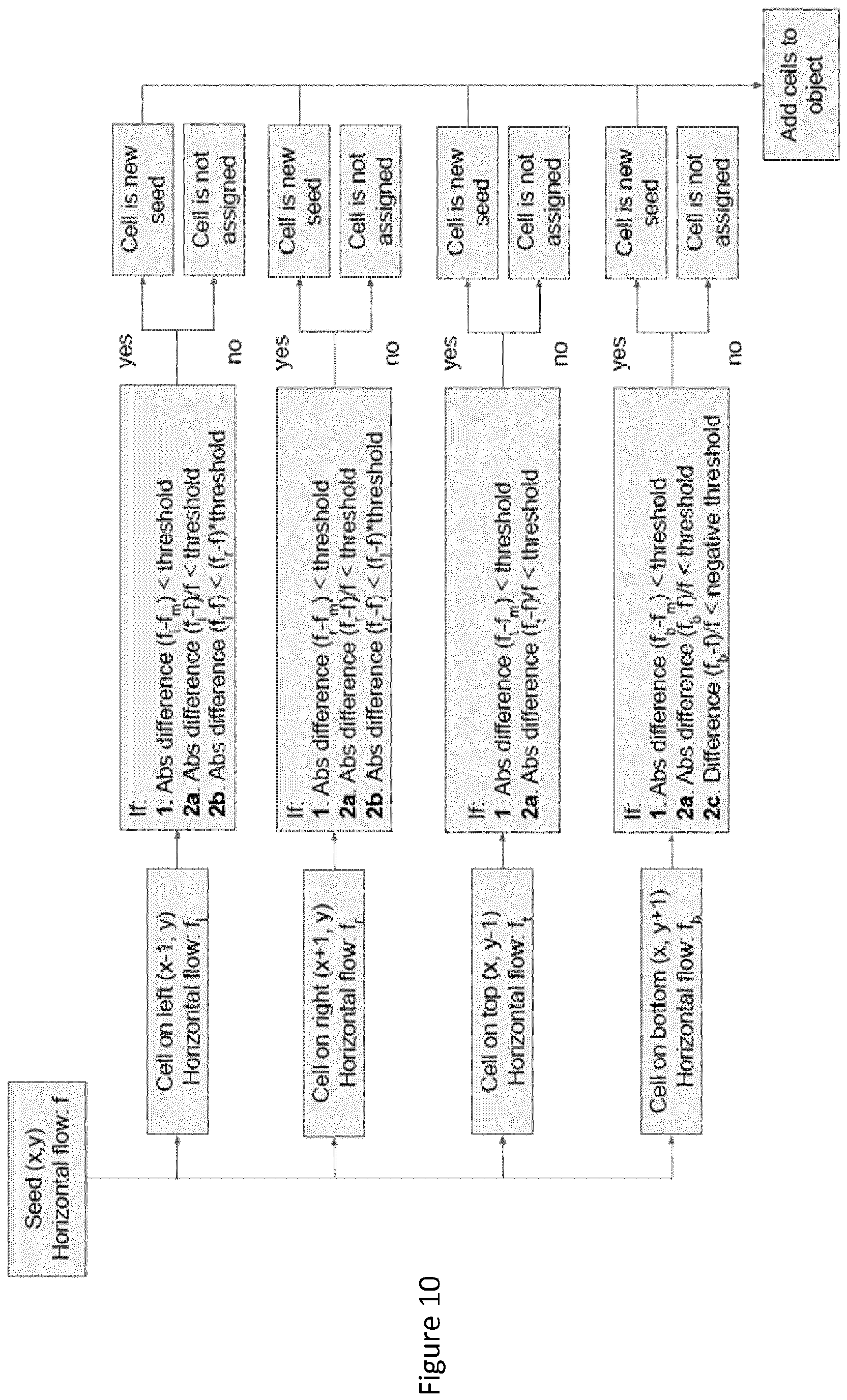