a discontinuous second phase comprising crosslinked silicone gel particles dispersed in the pressure sensitive adhesive matrix with a characteristic such that upon exposure to a debonding agent, the particles undergo a change in at least one of shape and volume.

[0067] Unless otherwise indicated, the measurements are carried out under test conditions of 23 ± 1°C and 50 ± 5% relative humidity.

[0068] A square sample with a frame shape was cut from the adhesive tape under investigation (external dimensions 33 mm x 33 mm; border width 2.0 mm; internal dimensions (window cutout) 29 mm x 29 mm). This sample was adhered to a polycarbonate (PC) frame (external dimensions 45 mm x 45 mm; border width 10 mm; internal dimensions (window cutout) 25 mm x 25 mm; thickness 3 mm). On the other side of the double-sided adhesive tape, a PC window measuring 35 mm x 35 mm was adhered. The bonding of PC frame, adhesive tape frame and PC window took place in such a way that the geometric centers and the diagonals lay in each case one above another (corner to corner). The bond area was 248 mm2. The bond was pressed under 10 bar for 5 s and stored for 24 hours with conditioning at 23 °C/50 % relative humidity.
[0069] Immediately after storage, the bonded assembly of PC frame, adhesive tape and PC window with the protruding edges of the PC frame was clamped into a sample holder in such a way that the assembly was oriented horizontally and the PC window was beneath the frame. The sample holder was subsequently inserted centrally into the intended receptacle of the DuPont impact tester. The impact head, weighing 150 g, was inserted such that the circular impact geometry with a diameter of 24 mm impacted centrally and flush on the window side of the PC window.
[0070] A weight with a mass of 150 g, guided on two guide rods, was dropped vertically from a height of 5 cm onto the assembly thus arranged of sample holder, sample and impact head (measuring conditions 23°C, 50% relative humidity). The height of the falling weight was raised in steps of 5 cm until the impact energy introduced caused destruction of the sample as a result of the impact stress, and the PC window parted from the PC frame.
[0071] In order to be able to compare experiments with different samples, the energy was calculated as follows:

[0072] For each product, five samples were tested, and the average energy value was reported as a characteristic value for the impact resistance. A value of at least 0.45 J is considered to indicate good impact resistance.

[0073] The push-out test provides information on the extent to which the bond of a component in a frame-shaped body, such as of a window or display in a housing, is resistant.
[0074] A rectangular, frame-shaped sample was cut out of the adhesive tape under investigation (outside dimensions 33 mm x 33 mm; border width 2.0 mm in each case; inside dimensions (window opening) 29 mm x 29 mm, bond area 248 mm2 on each of the top and bottom sides). This sample was adhered to a rectangular PC plastic frame (PC = polycarbonate) (outside dimensions 40 mm x 40 mm; border width of the long borders 8 mm in each case; border width of the short borders 10 mm in each case; inside dimensions (window opening) 24 mm x 24 mm; thickness 3 mm). Adhered on the other side of the double-sided adhesive tape sample was a rectangular PC sheet with dimensions of 35 mm x 35 mm. The full bond area of the adhesive tape available was utilized. The PC frame, adhesive tape sample and PC window were bonded such that the geometric centers, the bisecting lines of the acute diagonal angles and the bisecting lines of the obtuse diagonal angles of the rectangles each lay on top of one another (corner on corner, long sides on long sides, short sides on short sides). The bond area was 248 mm2. The bond was pressed at 248 N for 5 s and stored for 24 hours with conditioning at 23°C/50% relative humidity.
[0075] Immediately after storage, the adhesive assembly composed of PC frame, adhesive tape and PC sheet was placed with the protruding edges of the PC frame onto a frame structure (sample holder) in such a way that the assembly was oriented horizontally and the PC sheet pointed downward, hanging freely.
[0076] A plunger is then moved through the window of the PC frame, perpendicularly from above, at a constant speed of 10 mm/s, so that it presses centrally onto the PC plate, and a record is made of the respective force (determined from respective pressure and contact area between plunger and plate) as a function of the time from the first contact of the plunger with the PC plate until shortly after the plate has fallen (measuring conditions 23°C, 50% relative humidity). The force acting immediately prior to the failure of the adhesive bond between PC plate and PC frame (maximum force Fmax in the force-time diagram in N) is recorded as the answer of the push-out test.

[0077] For the determination of removability of the adhesive tape under the influence of EtOH/water, the specimens manufactured for the push-out strength test as described hereinbefore were stored at 65°C and 90% relative humidity in a 75:25 (vol%) mixture of ethanol and water. For the ethanol/water storage a closeable vessel was used in order to prevent loss of ethanol by evaporation. Following storage, the specimens are first rinsed off with distilled water and then stored for 24 hours at 23°C and 50% relative humidity. Only then the push-out strength test as described above was repeated.
[0078] The drop of the maximum force Fmax in % is given as the result; a high drop (at least 35 %) indicates good removability of the tape.

Preparation of the PSAs

[0079] The pressure-sensitive adhesives (PSAs) set out in the examples were homogenized as solvent-based compositions in a kneading apparatus with a double-sigma kneading hook. The solvent used was butanone (methyl ethyl ketone, 2-butanone). The kneading apparatus was cooled by means of water cooling.
[0080] In a first step, the solid acrylonitrile-butadiene rubber was pre-swollen with the same amount of butanone at 23°C for 12 hours. This preliminary batch was then kneaded for 2 hours. Subsequently, again, the amount of butanone selected above and, optionally, the liquid NBR rubber were added in two steps with kneading in each case for 10 minutes. Thereafter the tackifier resin was added as a solution in butanone with a solids content of 50%, and homogeneous kneading was continued for 20 minutes more. The final solids content is adjusted to 30 wt% by addition of butanone.

Production of the test specimens

[0081] The PSA was coated onto a PET film which was 23 µm thick and etched with trichloroacetic acid by means of a coating knife on a commercial laboratory coating bench (Sondermaschinen Oschersleben GmbH). The butanone was evaporated in a forced air drying cabinet at 105°C for 10 minutes. The slot width during coating was adjusted so as to achieve a coat weight of 50 g/m2 following evaporation of the solvent. The films freed from the solvent were subsequently lined with siliconized PET film and stored pending further testing at 23°C and 50% relative humidity.

- at least one acrylonitrile-butadiene rubber; and

- at least one tackifier resin, 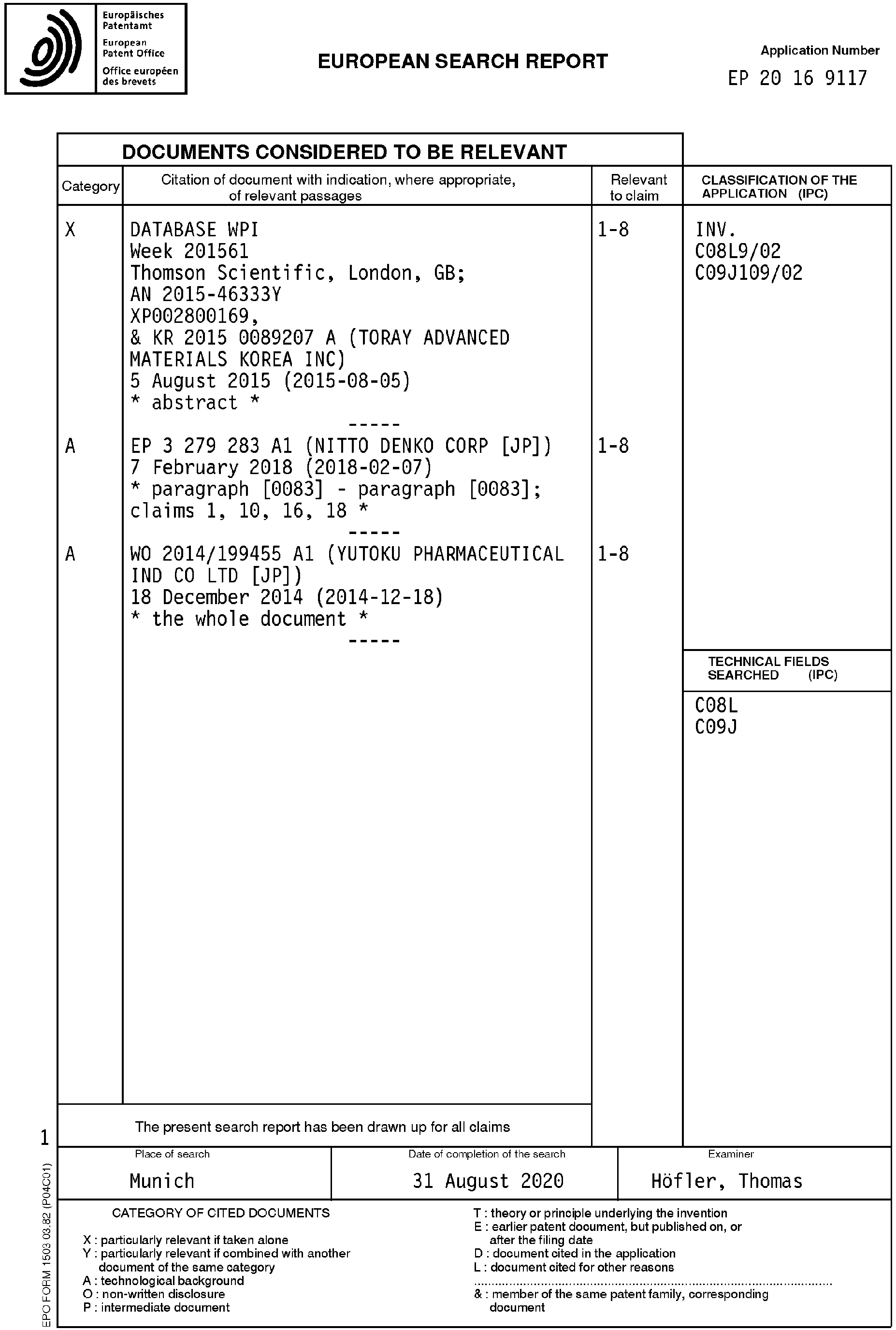 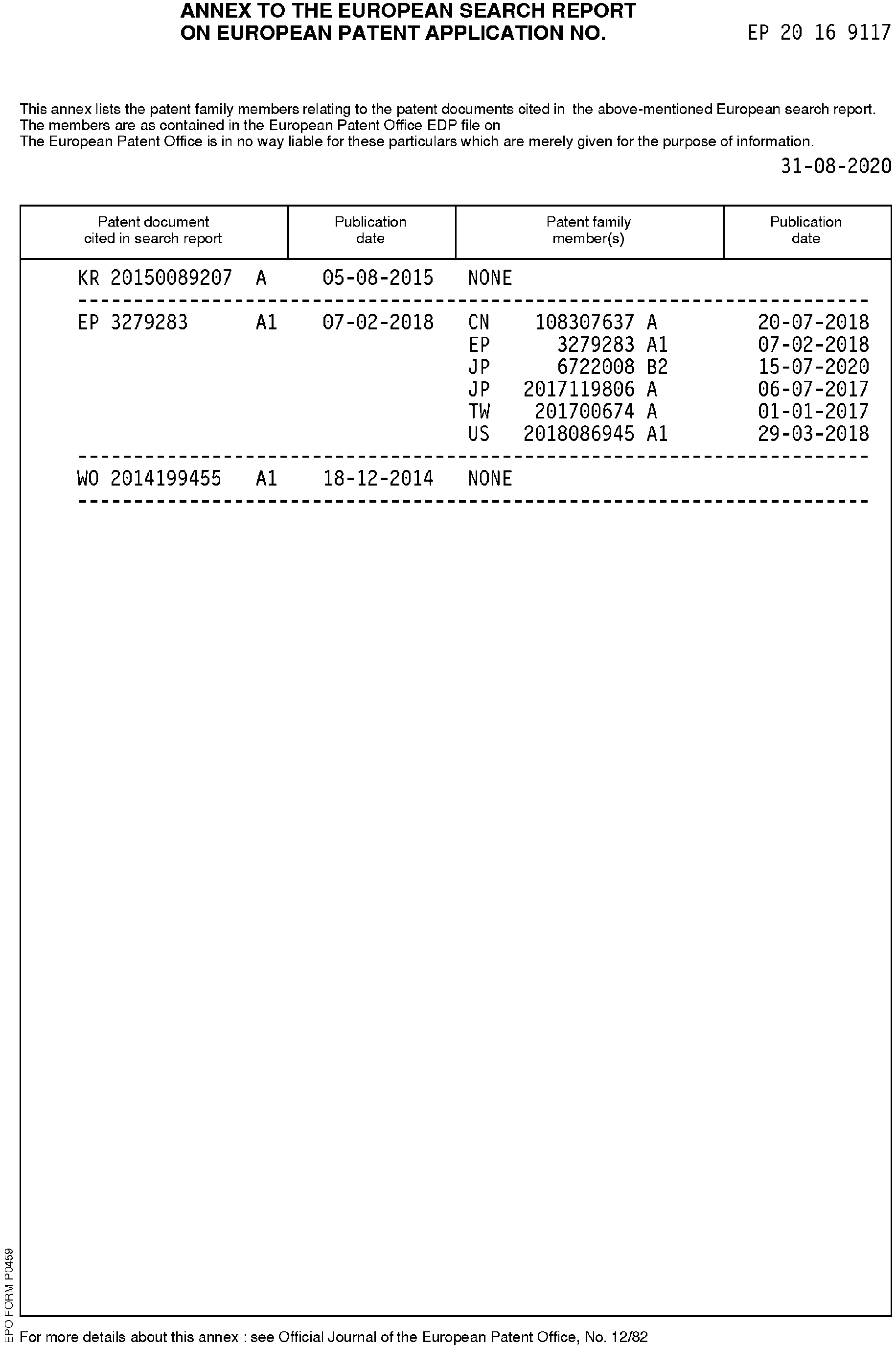