[0001] The invention relates to a surface treatment of a substrate or metallic coating before applying a ceramic coating on top.
[0002] With increased demands in high gas temperature and long service life, especially in cyclic life for industrial gas turbines, the conventional Air Plasma Sprayed (APS) and Electron Beam Physical Vapour Deposited(EB-PVD) of 7%Y2O3 partially stabilized ZrO2 (7YPSZ) thermal barrier coatings (TBC's) cannot meet the higher challenges.
[0003] The APS TBC's contain a laminar structure and are much less strain tolerant as compared to the ones with a columnar structure and therefore have a short cyclic life.
[0004] The EB-PVD TBC's contain a columnar structure and therefore a good cyclic life. However, they have some disadvantages as high thermal conductivity, thickness is limited to maximum 350µm, high investment costs, and component size limitation since using vacuum chamber is necessary.
[0005] These disadvantages create problems to satisfy the increased market demands.
[0006] Therefore, turbine efficiency and availability are limited and less competitive.
[0007] TBCs with a long life and a low conductivity are needed to solve the problem.
[0008] A new spraying process called suspension plasma spraying (SPS) comprises spraying fine TBC powders on top of a metallic bond coat, especially of MCrAlY bond coats, applied by thermal spraying methods for gas turbine hot components. Such SPS TBC's have been discovered to possess not only a columnar structure like EB-PVD does, but also a high desired microporosity.
[0009] The intention to develop a SPS TBC is to offer both high cyclic life and a low thermal conductivity to replace both APS and EB-PVD TBC's. However, up to now the test results of coating were not repeatable and the process has not been stabilized to create a controllable coating quality, although a huge effort has been made by many research groups to optimize the SPS TBC spraying parameters.
[0010] It is the aim of the invention to improve a columnar TBC microstructure.
[0011] The problem is solved by a method of a surface treatment of claim 1, by a substrate of claim 10 and by a method to apply a ceramic coating according to claim 11.
[0012] In the dependent claims further advantages are listed which can be arbitrarily combined with each other to yield further advantages.
[0013] The three figures show the surface morphology and the resulting SPS TBC.
[0014] This invention is to introduce some key surface treatments on the metallic bond coat or a substrate, like especially MCrAlY bond coats prior to a SPS top coat application.
[0015] The inventive surface treatment includes first a shot peening and then a light grit blasting.
[0016] Cleaning steps can preferably be performed before, between and finally.
[0017] Preferably the shot peening should be carried out with a shot size of 0,2 mm -0,5 mm in diameter of shot media,
preferably made of cast steels, metal cut wires, glass beans, or ceramic beans,
preferably a pressure of 0,5-5 bars,
preferably a surface coverage 100% - 400%.
[0018] The following grit blasting should be carried out preferably with
Alumina grit of 80-270 mesh,
preferably a pressure of 0,5-5 bars,
preferably nozzle diameter 5 mm - 20 mm,
preferably at an angle of 30° - 80° to the surface.
[0019] The resulting surface, here of the bond coat surface has a roughness value of Ra = 1µm - 5µm with a micro-roughness created due to the light grit blasting with fine grit media. The unique surface roughness created by this procedure results in formation of thin columnar topcoat microstructure.
[0020] The surface treatment parameters depend on the method of coating the substrate or the MCrAlY bond coats (M= Ni, Co, Fe) .
[0021] Now SPS TBCs have a lower thermal conductivity and/or longer life, especially cyclic life than that of the currently used APS and EBPVD TBC. These advantages allow an increase in lifetime of gas turbine components and the turbine efficiency.
[0022] Figure 1 shows the morphology of an as-spayed surface 4' of a metallic bond coat on substrate 4 on the left and on the right side the columnar microstructure of a SPS TBC 7' as in the state of the art.
[0023] Without any post surface treatment, the as-spayed bond coat surface 4' is very roughness more than Ra= 6µm and the microstructure of SPS TBC 7' sprayed on this bond coat surface 4' contains very large columns, i.e. very low column density and the TBC 7' surface is also very rough.
[0024] Figure 2 shows the morphology of a surface 4" of a metallic bond coat on a substrate 4 on the left, which was shot peened (starting from Figure 1) creating a smoother bond coat surface than the as-sprayed bond coat 4' and on the right side the columnar microstructure of a SPS TBC 7".
[0025] On top of the shot peened bond coat 4", TBC 7" contains smaller columns and its outer surface is smoother than the SPS TBC 7' in figure 1.
[0026] Figure 3 shows the inventive morphology of a surface 4"' of a metallic bond coat on a substrate 4 on the left, which was shot peened according to figure 2 and finally grit blasting, starting from figure 2 and on the right side the resulting microstructure of a SPS TBC 7"'.
[0027] With both shot peening and grit blasting, the bond coat surface 4"' is smooth but contains small and frequent peaks so called micro-roughness. This inventive surface morphology leads to the SPS TBC 7"' in figure 3 containing much smaller or thinner columns with a high column density as compared to the SPS TBC 7" in figure 2. The SPS TBC 7"' surface is as least as smooth as that 7" in figure 2. 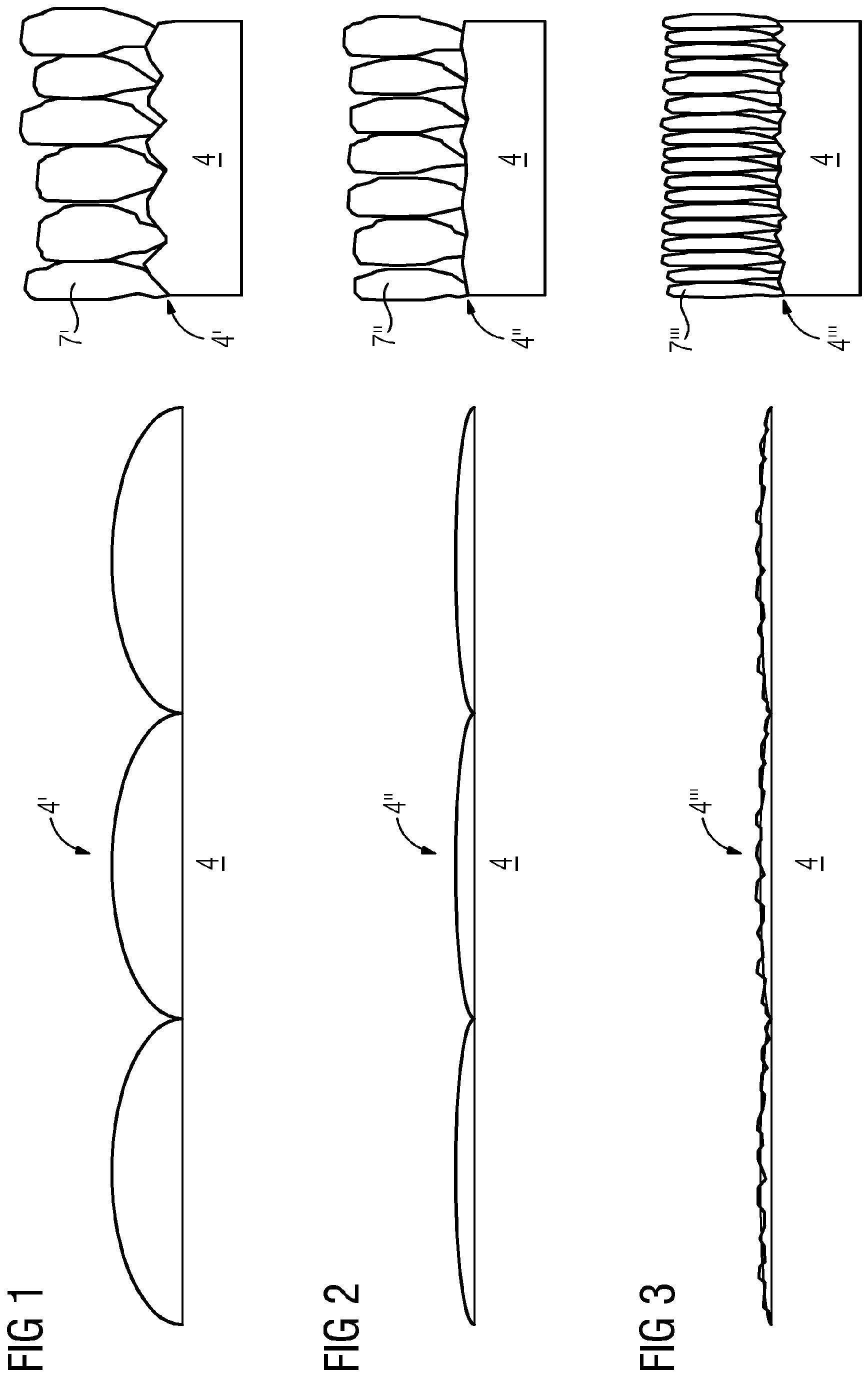 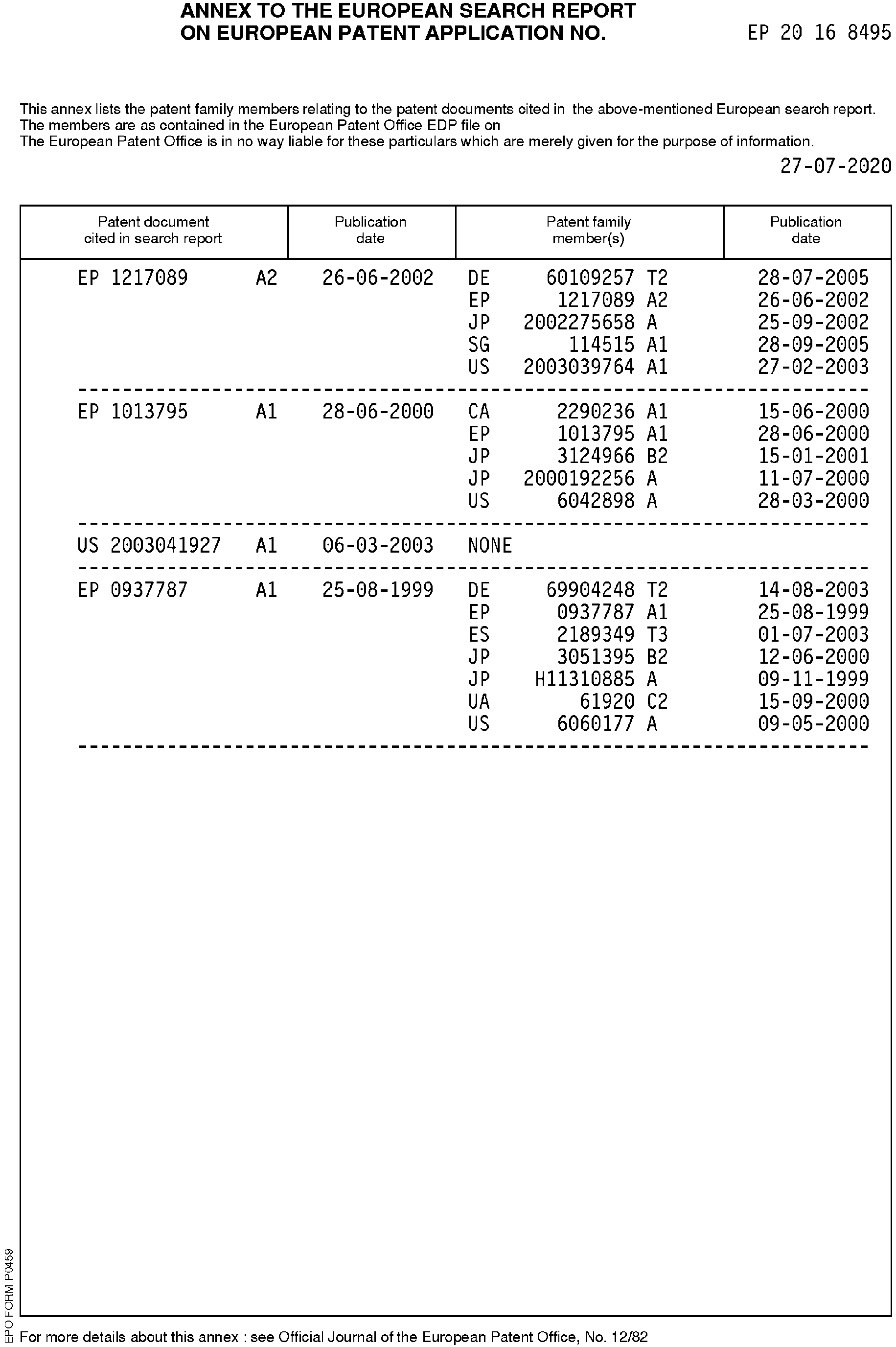