[0003] The importance of safety-critical systems in many application domains of embedded systems, such as aerospace, railway, health care, automotive and industrial automation is continuously growing. Thus, along with the growing system complexity, the need for safety assurance as well as its effort is increasing in order to guarantee the high quality demands in these application domains. The aim of safety assurance is to ensure that systems do not lead to hazardous situations which may harm people or endanger the environment. In the application domains of safety-critical systems, the safety assurance is defined by the means of standards, see, e.g., International Electrotechnical Commission (IEC) 61508, "Functional Safety of Electrical/Electronic/Programmable Electronic Safety-related Systems," 1998.
[0004] Traditionally, the assessment of a system in terms of safety is based on a bottom-up safety analysis approach, such as Failure Mode and Effect Analysis (FMEA), see IEC 60812, "Analysis Techniques for System Reliability - Procedure for Failure Mode and Effects Analysis (FMEA)," 1991. Alternatively, the assessment of a system according to reference implementations is based on top-down approaches such as Fault Tree Analysis (FTA), see, e.g., Vesely et al., "Fault Tree Handbook," US Nuclear Regulatory Commission, 1981. By such techniques, it is possible to identify system failure states, their causes and effects with impact on the system safety.
[0005] Often architectures of systems contain loops. An example for a loop is a closed-loop controller (PID). Closed-loop control refers to the process in which a physical variable, e. g., an ambient temperature, is to be brought to a particular value while being stabilized against disturbances. A feedback - obtained based on measuring an observable indicative of the physical variable - is used to set operation of an actuator influencing the physical variable. The controller is the component that acquires the actual value and derives a control signal from the difference between the set point and actual value. The controller then activates a final controlling element, e. g., a heater, that compensates for the control deviation.
[0006] Since failure propagation models often use Boolean logic, e.g., to drive a fault tree (FT), (closed) loops or ring closures are problematic. Because Boolean logic cannot contain loops in general, there are techniques to prevent loops in such models, e.g., as described in Höfig et al., "Streamlining Architectures for Integrated Safety Analysis Using Design Structure Matrices (DSMS)," Safety and Reliability: Methodology and Applications, 2014. For applications where failure propagation models are composed automatically, e.g., when the architecture is generated, such preventive technologies cannot help. Such loops often cannot be prevented, as they simply develop during the composition of a system from existing components and existing parts of failure propagation models. Therefore a technique is required that is able to deal with loops in failure propagation models that use Boolean logic.
[0007] In Yang et al., "Analytic Method to Break Logical Loops Automatically in PSA," Reliability Engineering & System Safety, 56(2):101 - 105, 1997, the authors automatically break open loops analytically. They use a top-down expansion of the Boolean equation until they detect a loop by addressing the same structural element in a conjunction twice. The term is then removed from the equation, arguing that a larger multiplication of basic events results in a smaller portion of the overall reliability. The result may become inexact and optimistic and the failure grows with the number of loops being detected.
[0008] In Cuenot et al., "Proposal for extension of meta-model for error failure and propagation analysis," Safe Automotive Software Architecture (SAFE), an ITEA2 project, 2013, the loops are removed from failure propagation models, but this work only addresses one-dimensional loops with only one entry and one exit point. Thus, it is not possible or only possibly to a limited degree to break open arbitrary loops that are multi-dimensional with multiple entry and exit points into other loops.
[0009] In Vaurio et al., "A Recursive Method for Breaking Complex Logic Loops in Boolean System Models," Reliability Engineering & System Safety, 92(10):1473 - 1475, 2007, the authors use a top-down method to expand the Boolean formula through all existing loops recursively. They stop this recursion after a step where further unrolling loops does not change the cut sets of the Boolean equation any more. It is assumed that this is a valid criterion for the termination of the algorithm, since the number of cut sets is finite. There is no proof that unrolling will not alternate between two solutions. Also, the number of cut sets grows exponential and so does the algorithm, which should be in O(nn).
[0010] Another approach can be found in Lim et al., "Systematic Treatment of Circular Logics in a Fault Tree Analysis," Nuclear Engineering and Design, 245 (Supplement C):172 - 179, 2012, where the initial condition of a system is investigated to treat circular logic. An initial condition of a circular logic is the point where the loop is closed. If the next gate is of the type "fails to run" or "fails to start", the circular logic is treated differently. These conditions indicate whether a supporting system is in standby and needs to be started to fulfill its function or if a system is running and fails to perform its operation. This knowledge is required for all gates of a fault tree logic that close a loop to automatically treat the circular logic using the algorithm. This limits the ability to fully automate the process of removing circular logic from automatically generated fault trees.
[0011] Against this background, a need exists for advanced techniques of analyzing safety-critical systems. In particular, a need exists for advanced techniques of identifying and resolving loops in fault trees.
[0012] It is therefore an objective of the invention to provide a computer-implemented method for resolving closed loops in automatic fault tree analysis of a multi-component system in an efficient and reliable manner.

3. Summary of the invention

[0013] This problem is according to one aspect of the invention solved by a computer-implemented method for resolving closed loops in automatic fault tree analysis of a multi-component system, the method comprising the steps:
[0014] One idea of the present invention is to provide a method of resolving closed loops by following an approach inspired by fixed-point iteration, i.e. by a method of computing solutions of equations that can be written in the form x = f(x). Given such a function defined on real numbers with real values and given a starting point x0 in the domain of f, one can show that the sequence xn+1 = f (xn), n = 0,1,2... converges against a solution x of x = f(x) under specific circumstances. In the present case, taking into account the underlying Boolean logic, only two values are possible for variables, namely Boolean TRUE and FALSE. A fault tree or failure propagation paths within the fault tree may be regarded as some form of equation or system of coupled equations. The present invention now considers Boolean TRUE as starting value to all failure propagation paths where a closed loop has been discovered, such closed loops being found by iteratively going through the fault tree from the output to one or more inputs. Based on that, certain properties of the fault tree are evaluated and the fault tree is amended in a specific way to remove any closed loop present in the fault tree. Subsequently, Boolean FALSE is inserted as second starting value to render the remaining fault tree analyzable.
[0015] The specifics of the method according to the invention will become more apparent further below with reference to exemplary embodiments depicted in the drawings as appended. In short, simple fault trees may already be solved by simply setting any loop interconnection to Boolean TRUE.
[0016] In case a tautology arises, which means that the output element of the fault tree gives Boolean TRUE independent of the values of the input elements, the loop interconnections have to be set to Boolean FALSE in a subsequent step, which then may render the fault tree analyzable, that is without any remaining loops.
[0017] However, for specific complex fault trees, problems may arise, which make it necessary to identify any Boolean AND-gate having, independently of the specific values of the input elements, no Boolean TRUE as output value. These inputs, namely the Boolean TRUE input to any Boolean AND-gate, are cut. Setting any loop interconnection to Boolean FALSE in the next step then renders any fault tree analyzable, which means that the remaining fault tree does not contain loops anymore and hence may be expressed as and/or expanded into a definite Boolean expression.
[0018] The method according to the invention results in a lower bound for the fault tree analysis. This means that the result of the Fault Tree analysis is either equal or larger the exact result of the fault tree.
[0019] The advantage is that the combination of demining a lower and in addition to an upper bound enables a clear judgment if safety requirements are fulfilled or not in most of the cases.
[0020] The solution according to the invention is highly effective compared to conventional methods. The method of the invention particularly features linear complexity O(n) and thus is much faster than any method known so far. The method may enable automatized optimization of technical products and/or systems with regards to reliability, availability, maintainability and/or safety (RAMS requirements). Moreover, such RAMS requirements may be taken into consideration for the optimization of further technical system properties like for example efficiency and so on. The invention particularly provides an advanced technique for analyzing safety-critical systems.
[0021] According to another aspect, the fault tree is expressed within Boolean algebra by iteratively expanding the fault tree into Boolean expressions at the elements.
[0022] According to another aspect, the closed loop of the fault tree is associated with a closed-loop control circuitry of the multi-component system.
[0023] A further aspect of the invention is a device comprising a processor configured to perform the aforementioned method.

4. Short description of the drawings

[0024] In the following detailed description, presently preferred embodiments of the invention are further described with reference to the following figures:

Fig. 1 shows a device with a processor performing a method according to the invention, resulting in a lower bound for the fault tree analysis.

Figs. 2-4 show a fault tree analyzed with the device of Fig 1.

Figs. 5 and 6 show fault trees according to an alternative embodiment, resulting in an upper bound for the fault tree analysis.

Figs. 7 and 8 show fault trees according to an embodiment resulting in a lower bound for the fault tree analysis.

Figs. 9 and 10 show fault trees according to an alternative embodiment, resulting in an upper bound for the fault tree analysis.

Figs. 11 and 12 show fault trees according to an embodiment resulting in a lower bound for the fault tree analysis.

1. A computer-implemented method (M) for resolving closed loops (7) in automatic fault tree analysis of a multi-component system, the method (M) comprising the steps:

d. setting (M4) the input value corresponding to a loop interconnection (ψi) of each such downstream element (4d) to Boolean TRUE; 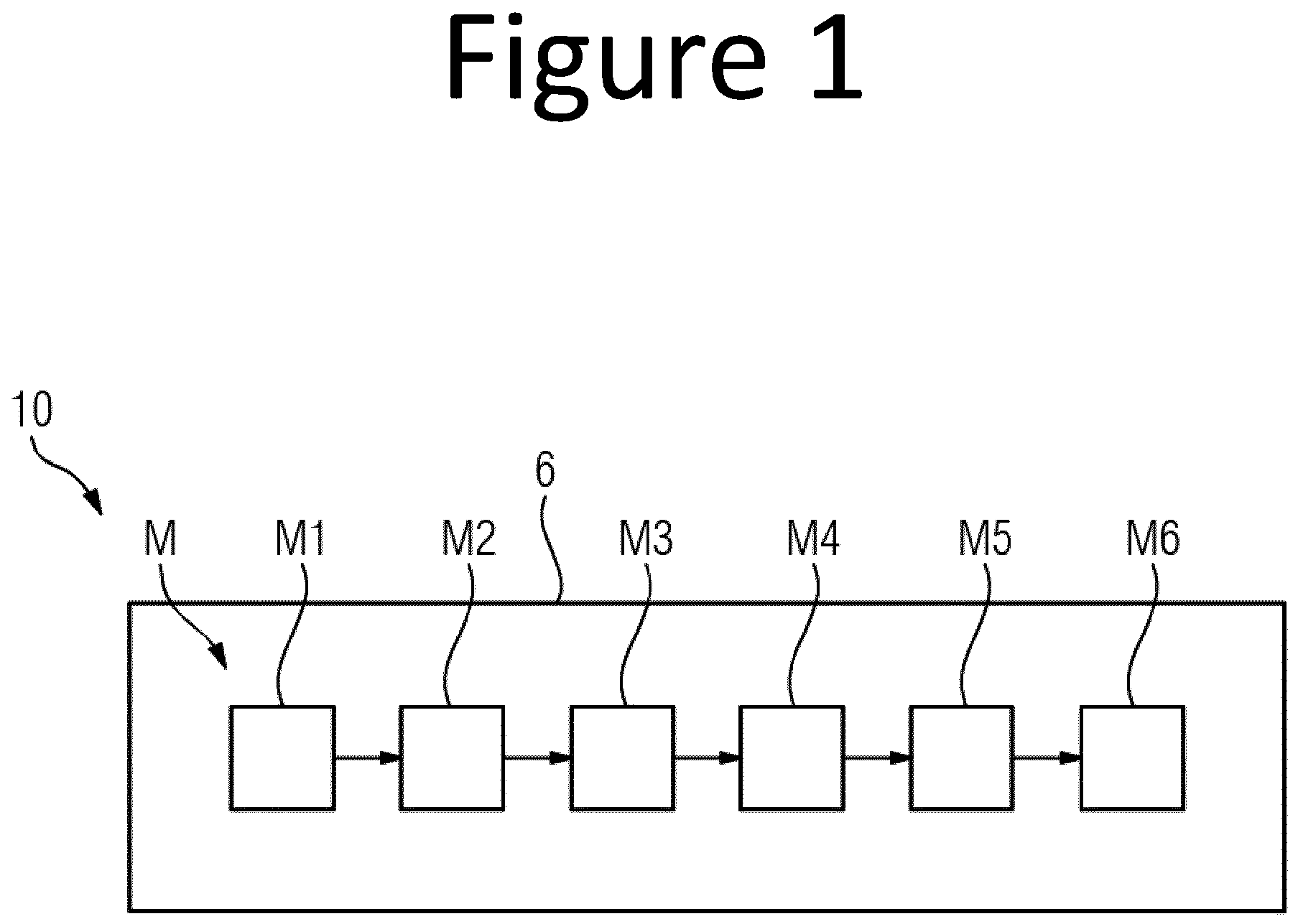 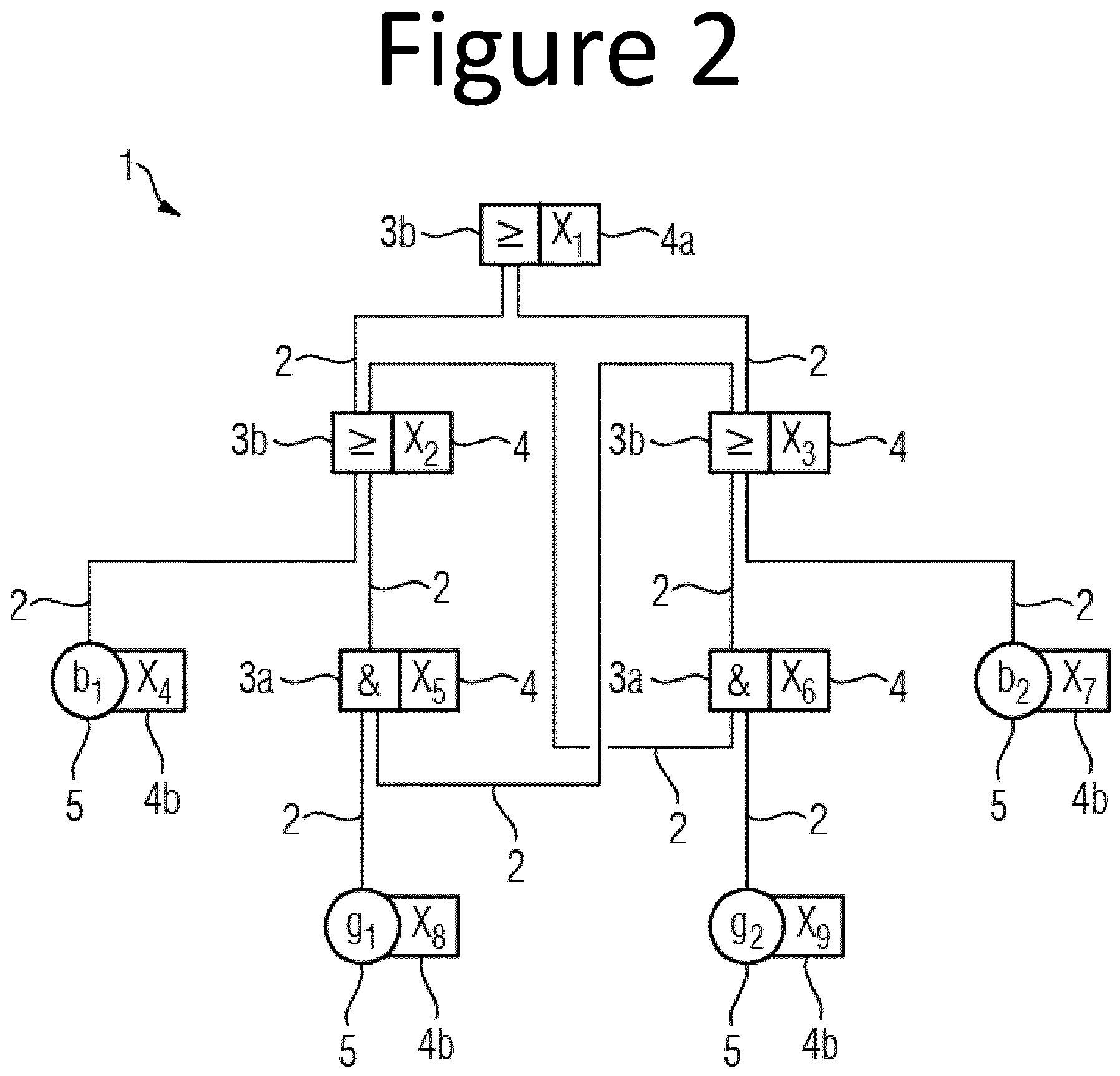 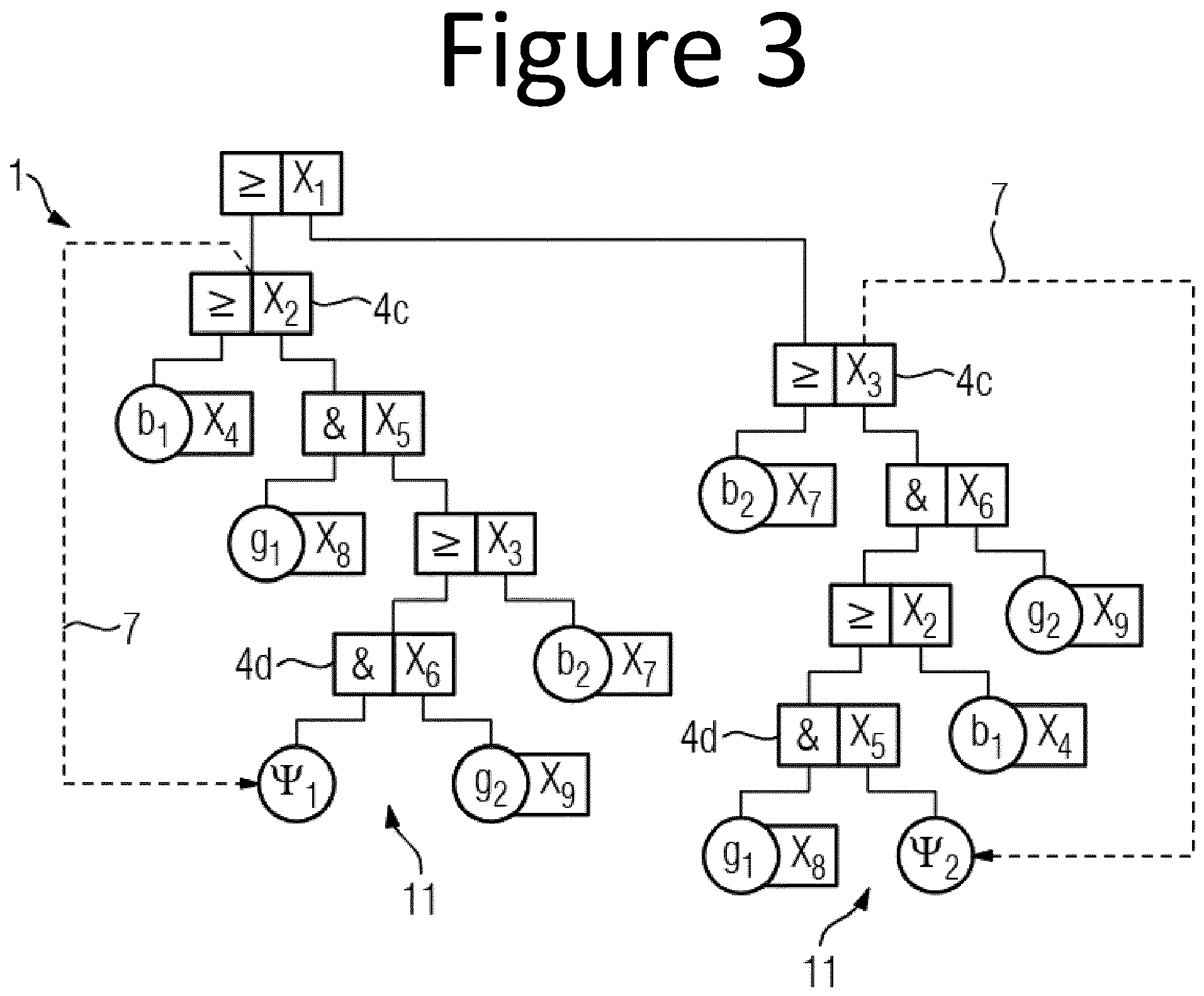 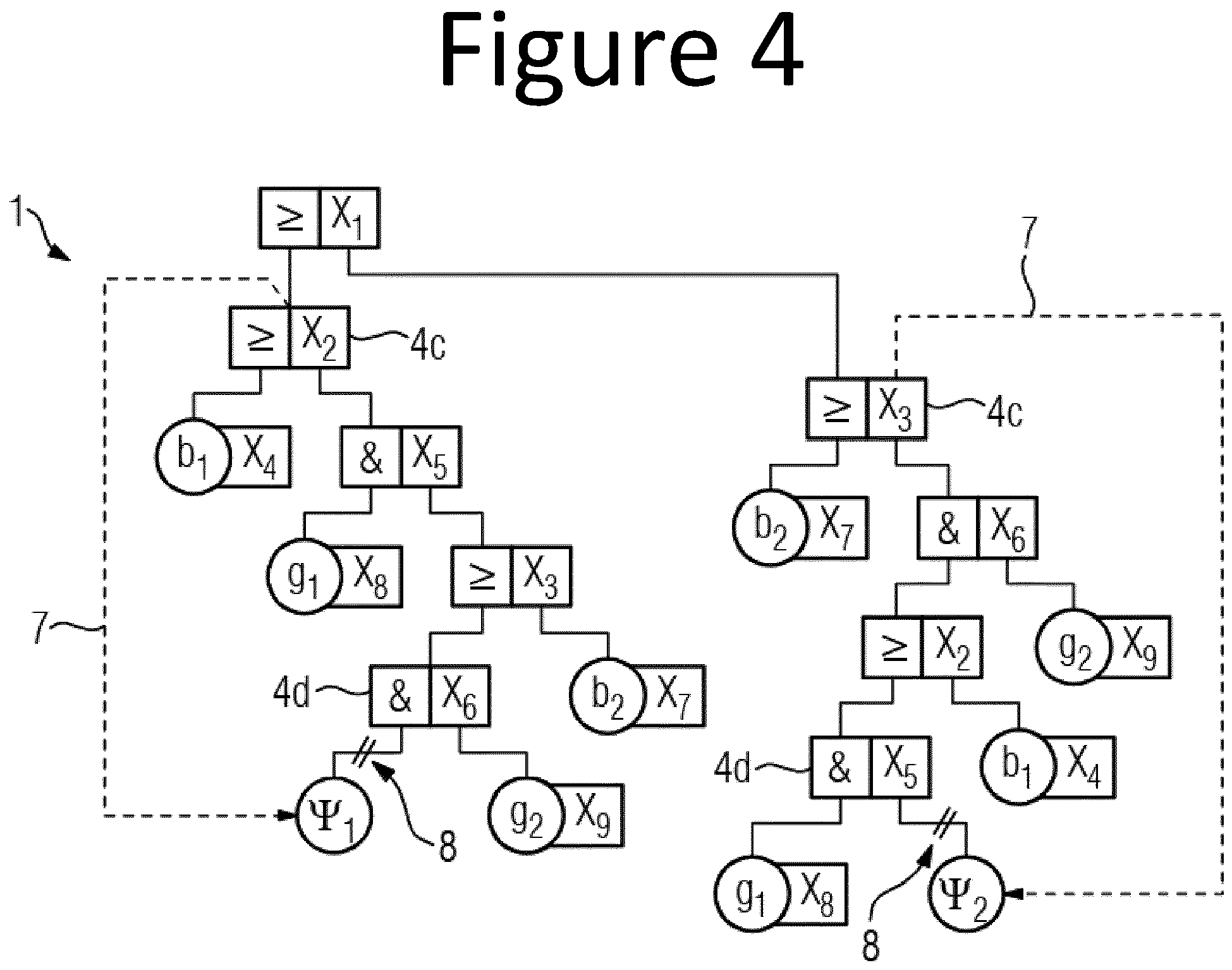 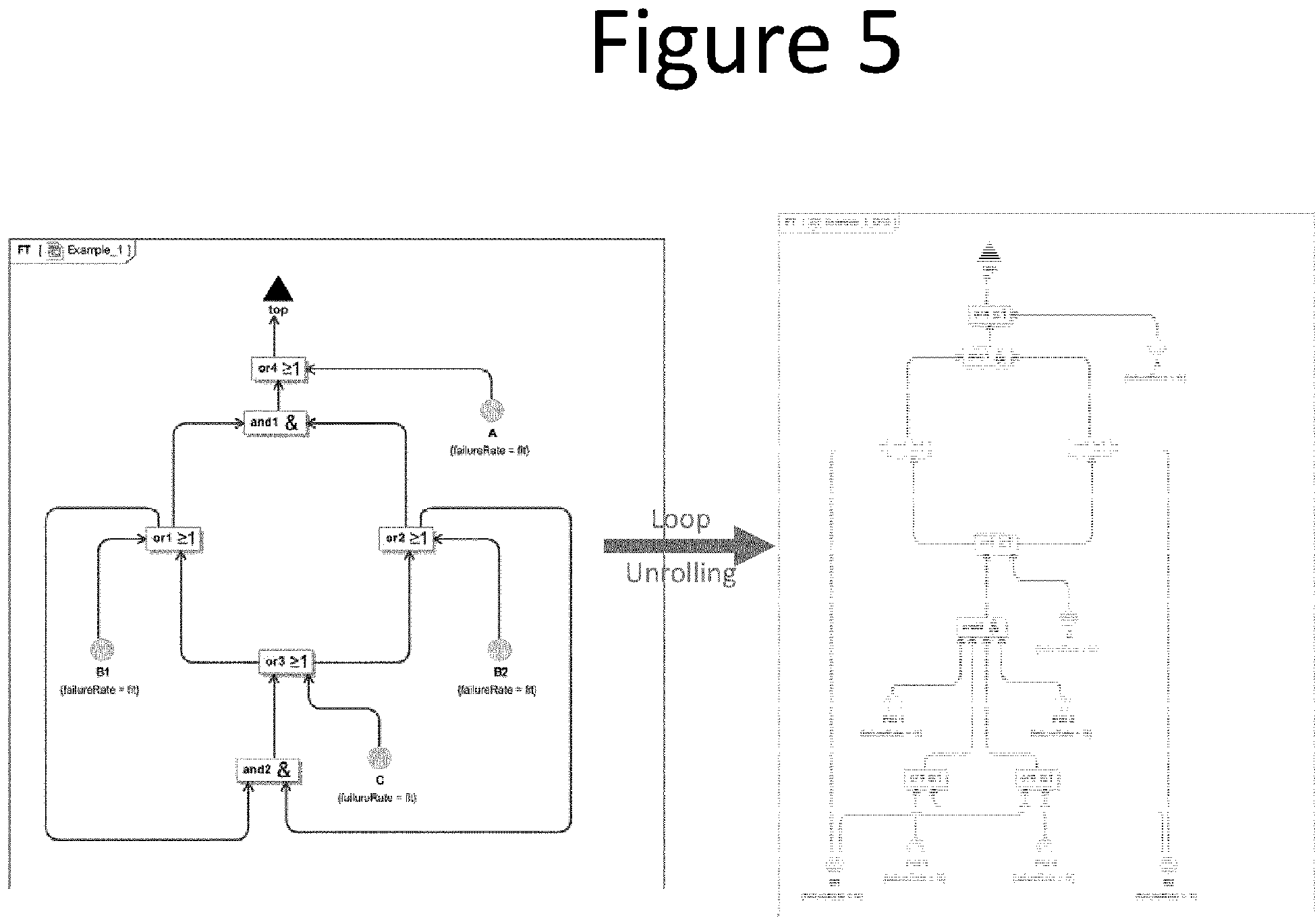 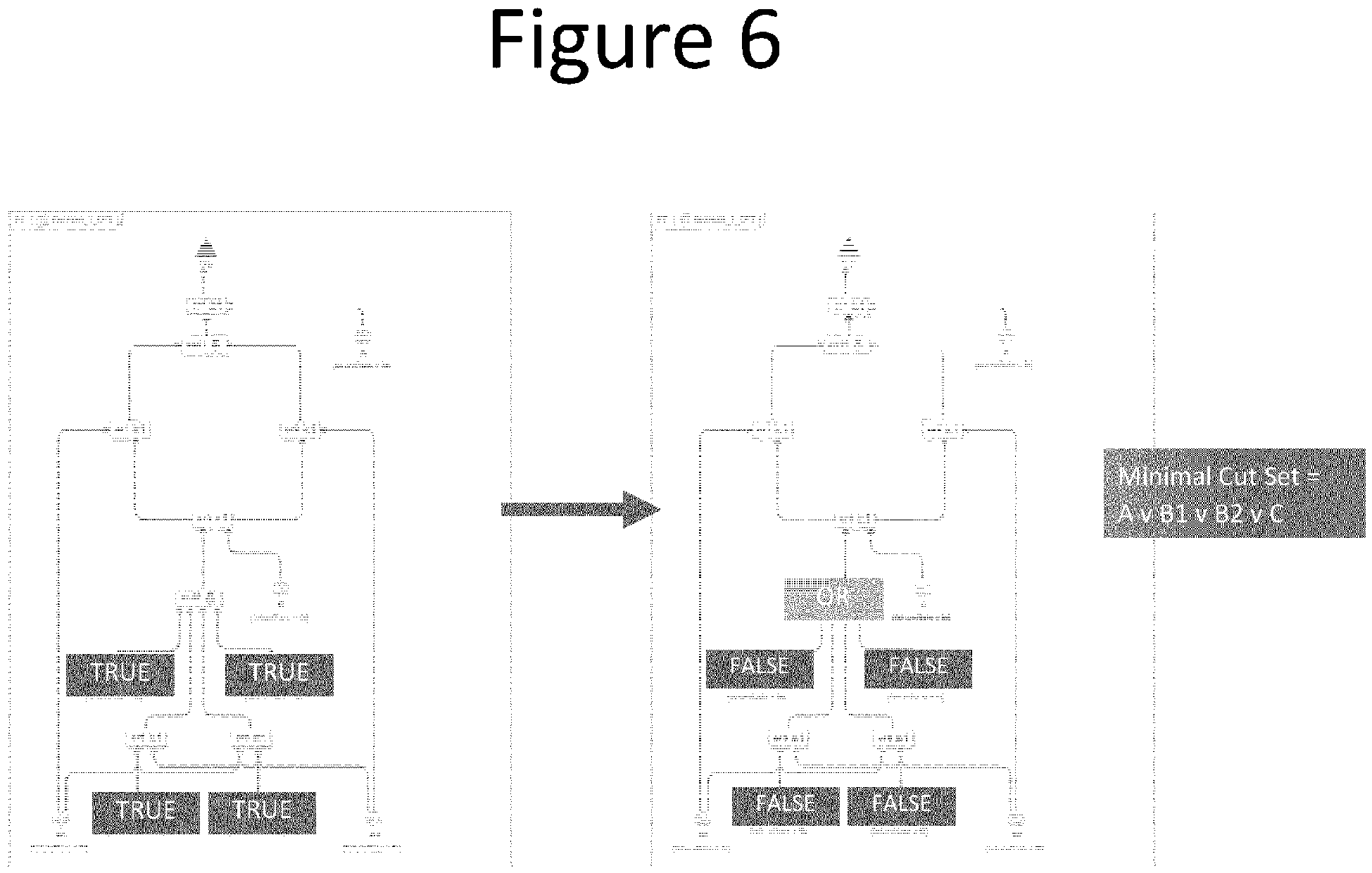 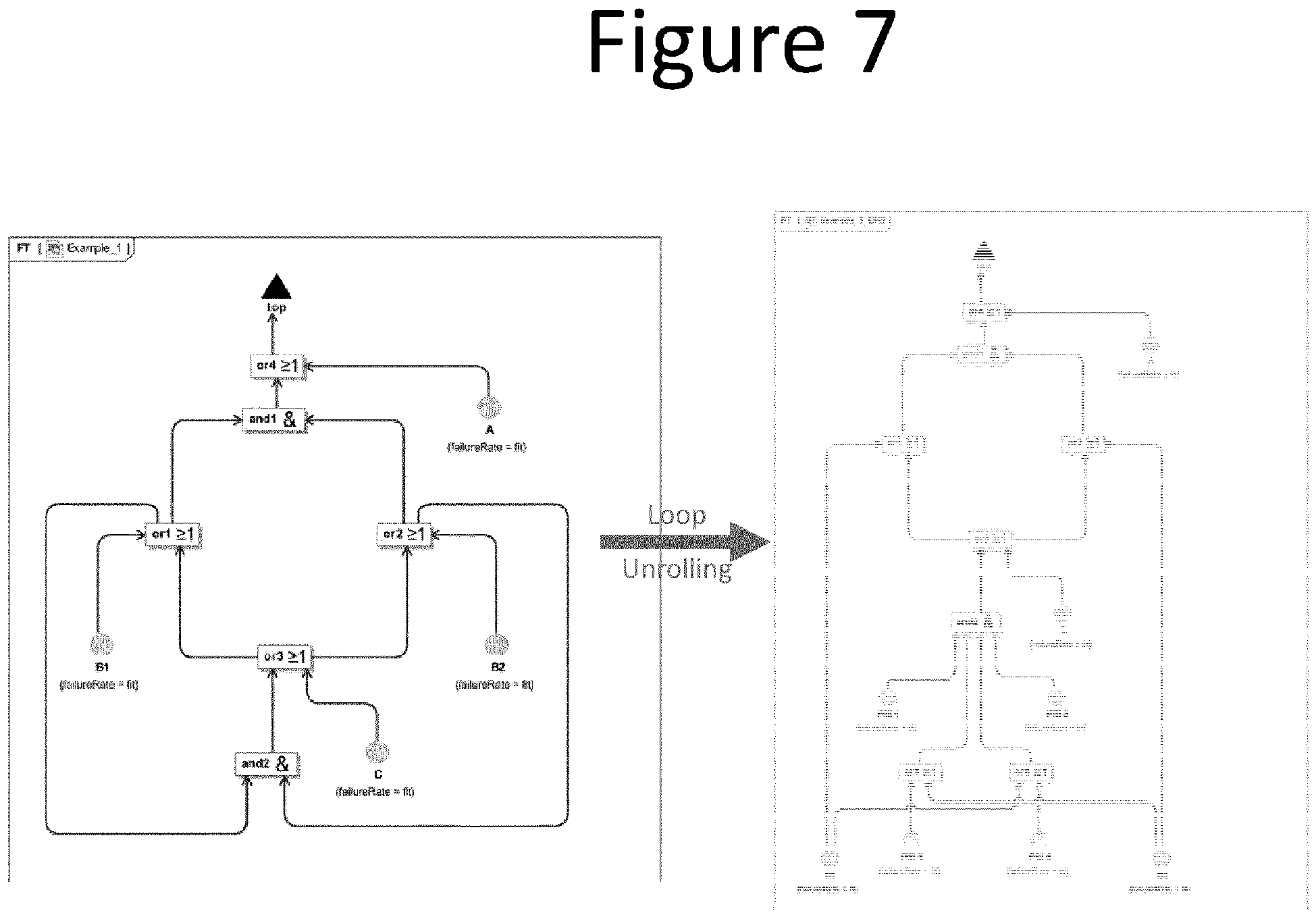 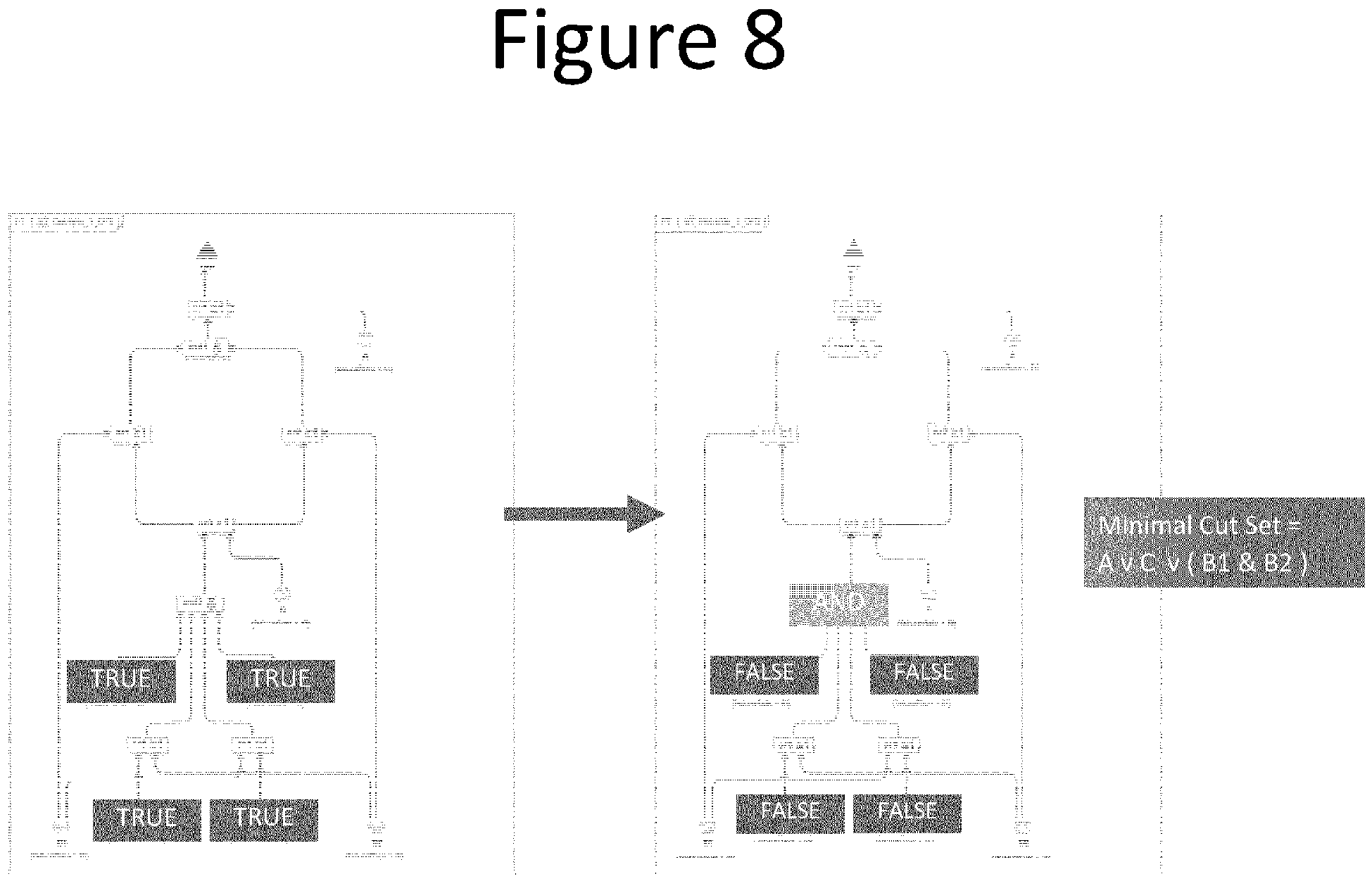 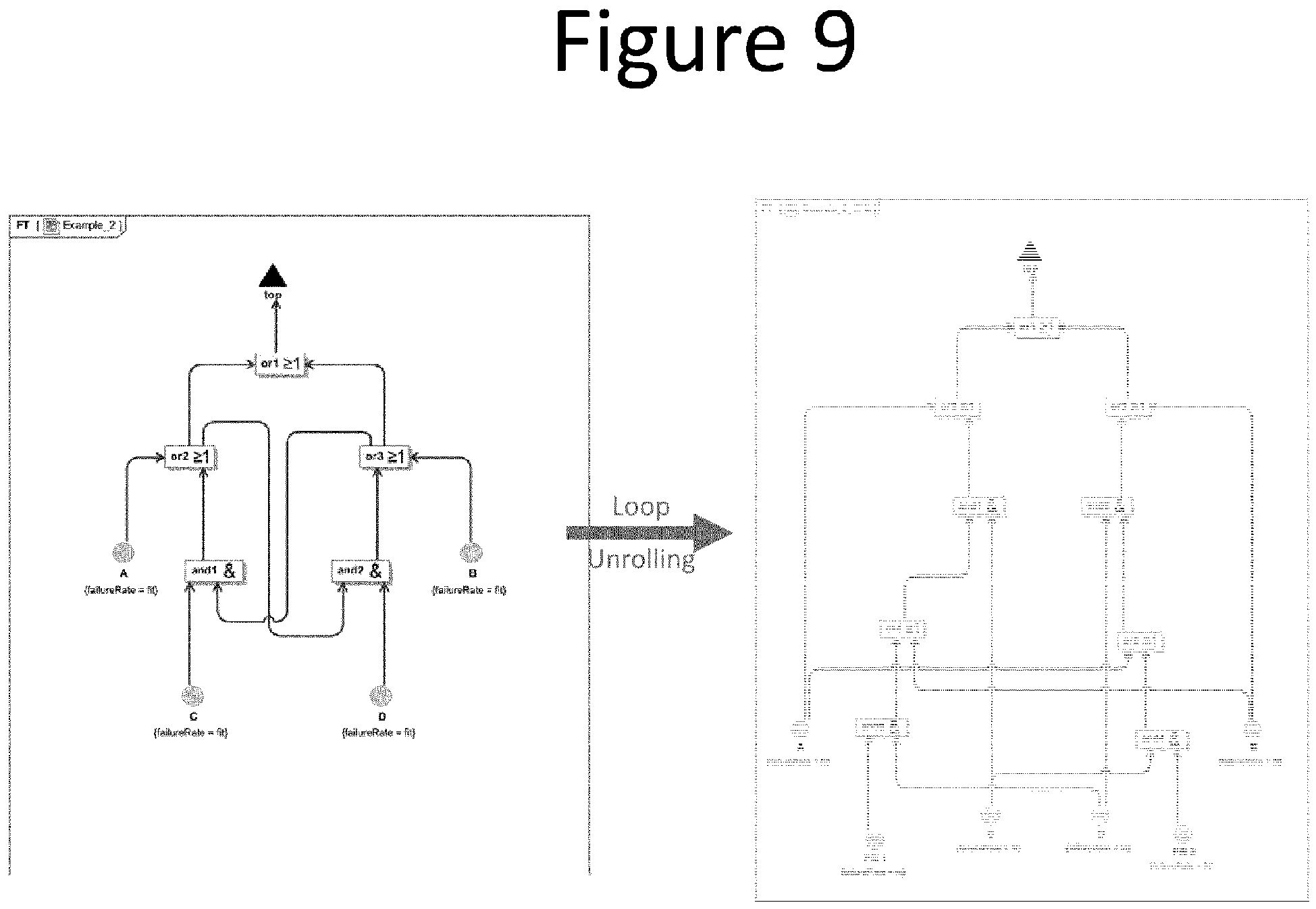 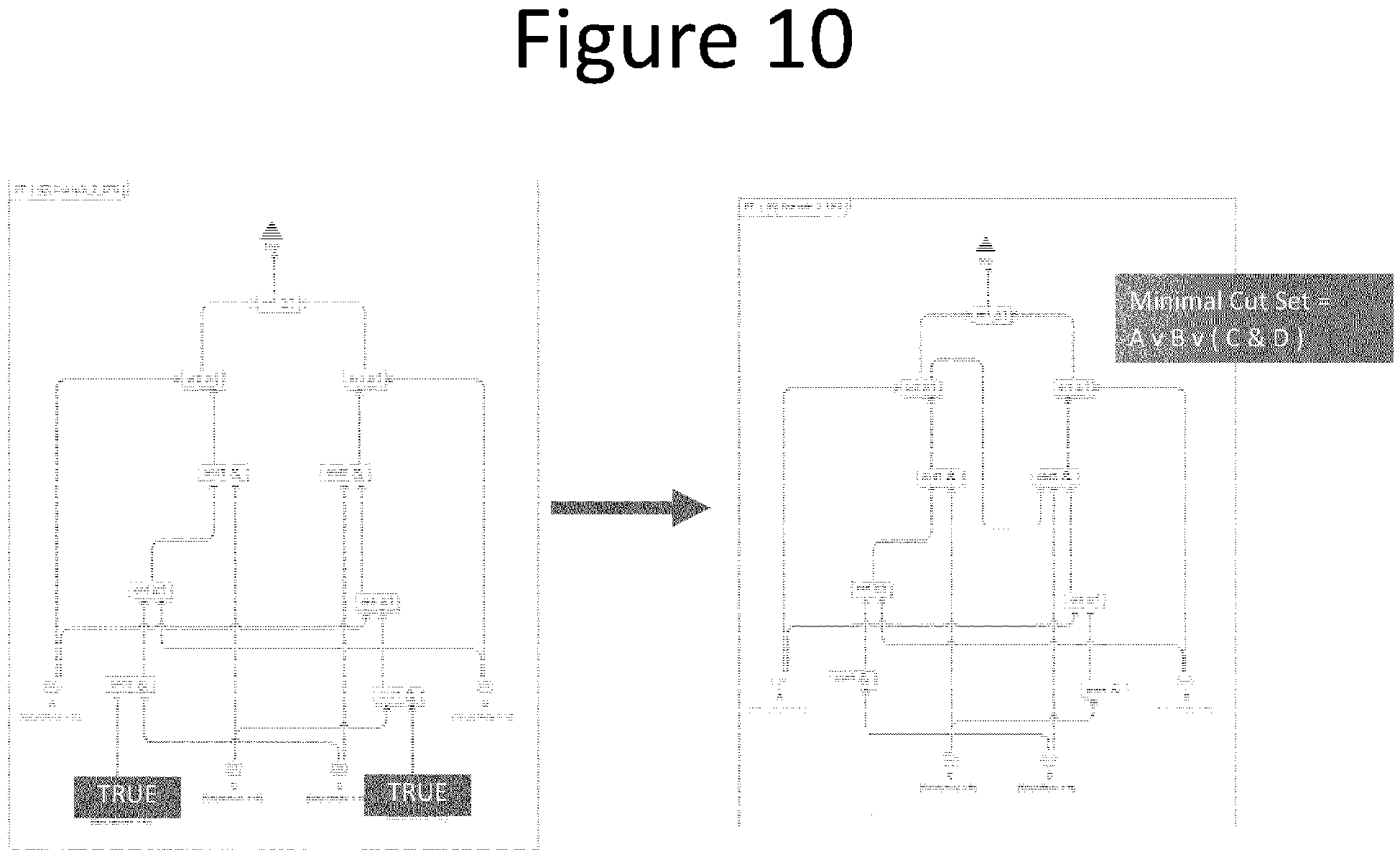 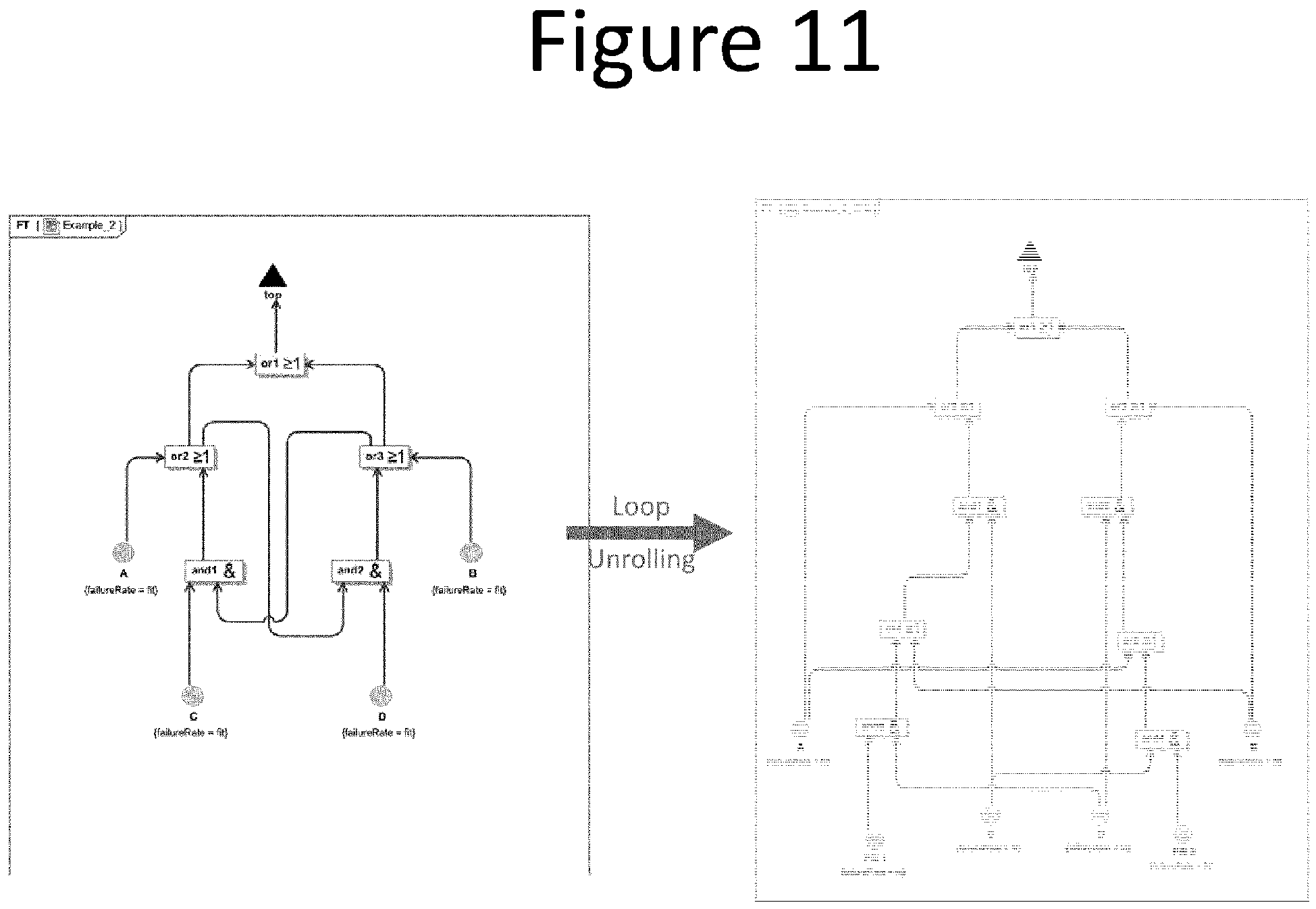 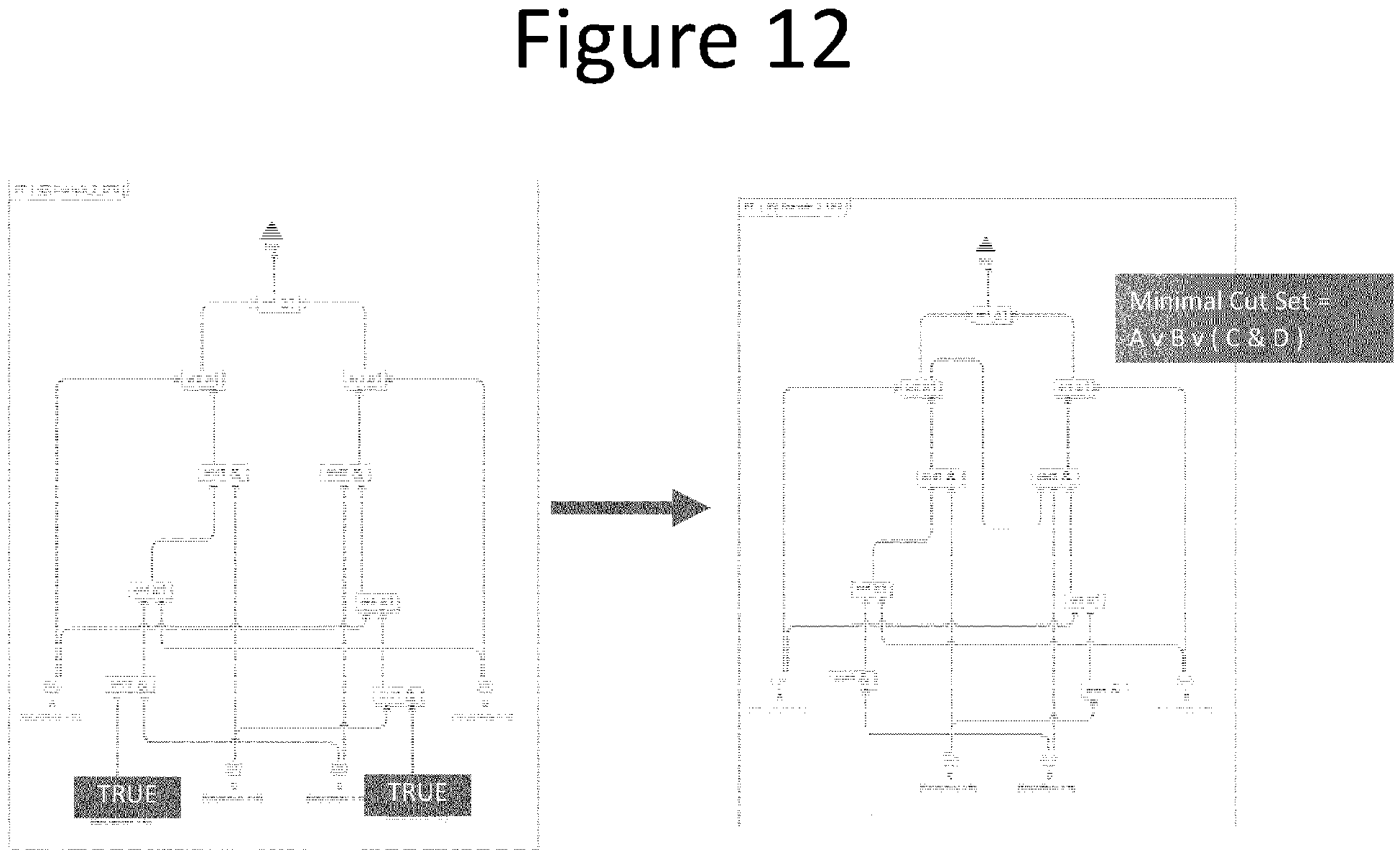 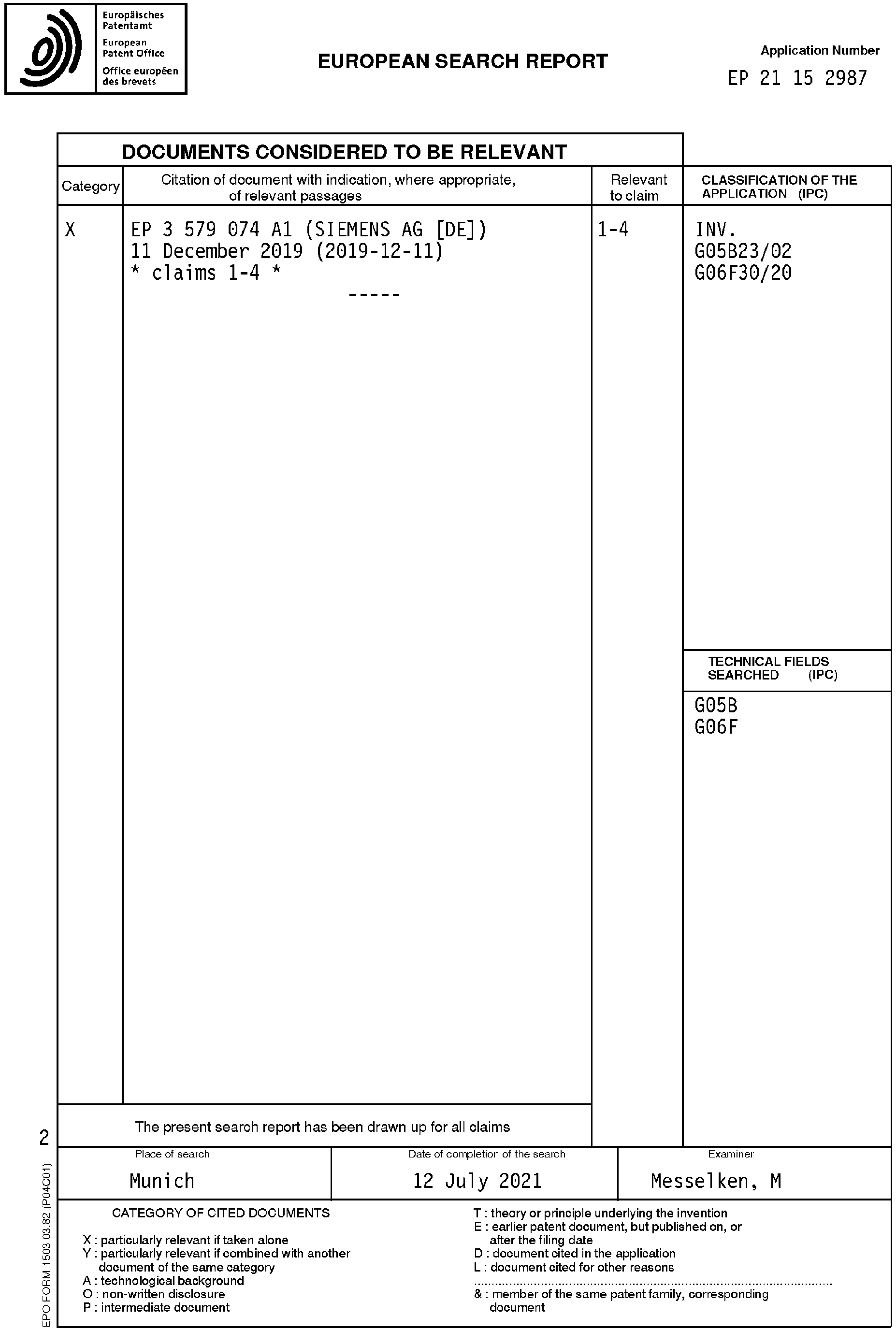 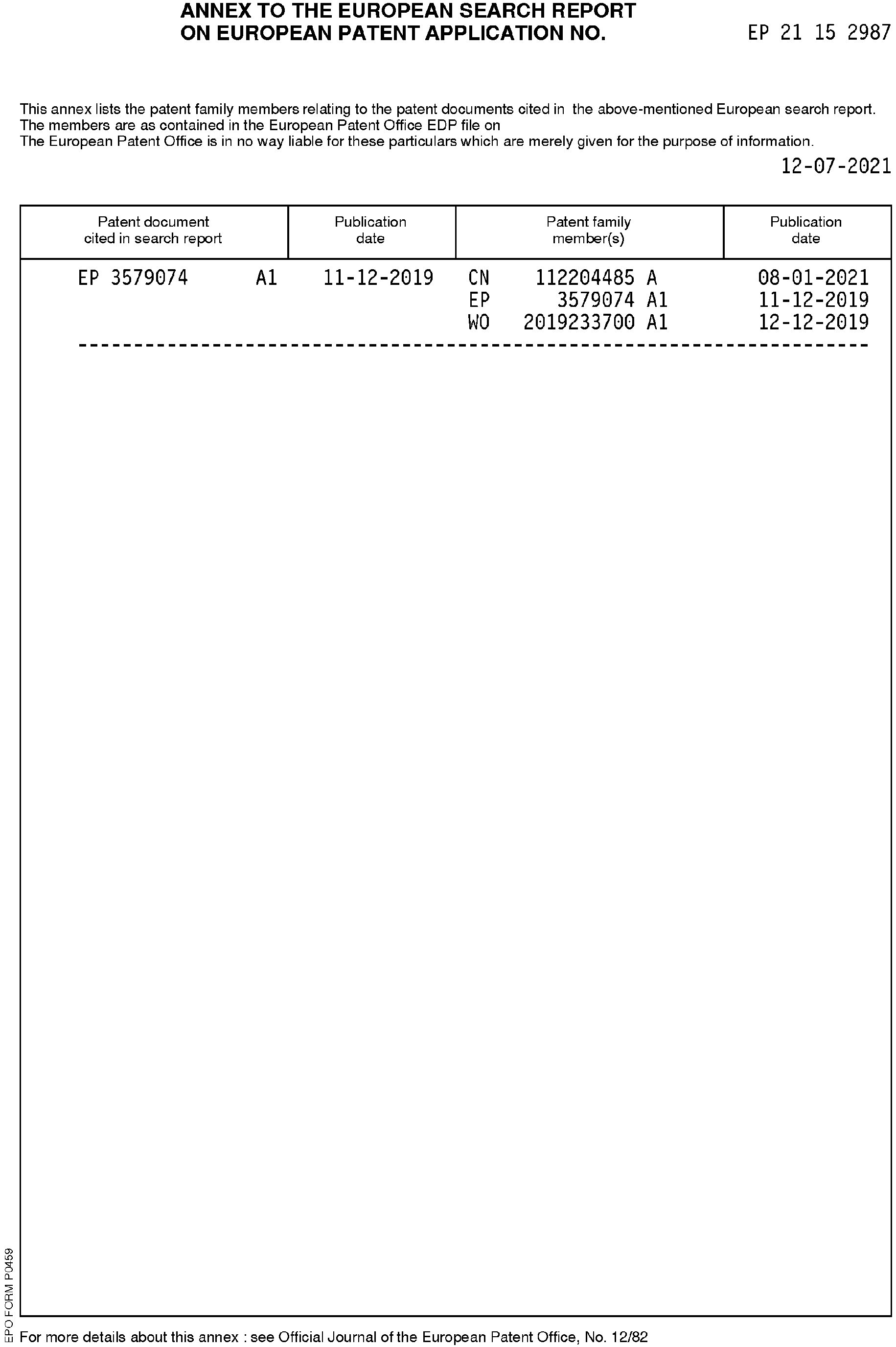