[0001] The invention relates to the field of engine building, mainly to power plants of diesel or gas-piston power generating plants and can be used to generate electricity from waste heat loss and pressure, as well as to capture harmful components of exhaust gases.
[0002] Known diesel generator set DGS (Source 1.), (Source 2) consists of a power generator associated with a diesel engine. The well-known diesel engine is provided with a working fluid cooling system with a radiator, an oil cooling system with a radiator, an exhaust system with a turbocharger and is provided with a muffler.
[0003] The disadvantage of the known diesel generator set is that all the heat and pressure in the exhaust gases is disposed of into the atmosphere which reduces the efficiency of the unit by more than half and harmful components from the exhaust gases are released into the atmosphere, negatively affecting the environment.
[0004] The invention is based on the task of improving the known diesel generator set in which the diesel engine cooling system is provided with a water-to-water type heat exchanger and the oil cooling system is provided with an oil-to-water type heat exchanger and additionally introduced into the design of the proposed invention of the water supply system, diesel engine power system additionally introduced a steam generator with a steam turbine and a steam condenser and a cooling liquid circulation system.
[0005] The technical result that is achieved through the work of the present invention is to increase the amount of electricity produced with the same amount of fuel consumed; reducing the cost of electricity; increase in the efficiency factor (COP) of the power plant; reducing the amount of emissions of harmful components into the atmosphere.
[0006] In addition, due to the operation of the invention, it becomes possible to use the released heat for domestic and technological needs in the absence of the need for water treatment. This goal is achieved due to the fact that the produced heat during the operation of the diesel engine is used to heat water which is then injected under pressure into the high-temperature exhaust gases of the diesel engine where it actively evaporates and goes to the steam turbine to generate electricity. Also, an important component of this system is that steam formation takes place with direct contact of water and hot exhaust gases, as a result of which there is no need for water treatment which significantly increases the efficiency and environmental performance of the power plant.
[0007] The drawing (figure 1) shows a diagram of a diesel-steam power plant which includes an electric generator (1) and a diesel engine associated with it (2).
[0008] The diesel engine cooling system is provided with a heat exchanger of the water-to-water type (3) and the oil cooling system is provided with a heat exchanger of the oil-to-water type (4).
[0009] The diesel-steam power plant includes a steam generator (5), with steam turbine (6) and steam condenser (7) with cooling circulation system liquids (8).
[0010] The steam turbine (6) is connected to an electric generator (9).
[0011] The steam generator, in its turn, consists of a receiving inlet manifold (10) of the nozzle part (11), a nozzle (12), a divider (13), a swirl chamber with soot and slag traps (14).
[0012] The steam turbine (6), in its turn, is provided with an overpressure relief valve (15) with a silencer (16).
[0013] The water supply system is provided with a pump (17) and a filter (18).
[0014] The diesel engine power system is provided with an electric turbo compressor (19).
[0015] The diesel-steam power plant operates as follows: during the operation of the diesel engine from the exhaust gas system, gases under pressure of 9-12 kg / cm and a temperature of 600-700 ° C enter the inlet manifold (10) of the nozzle part (11) to the splitter (13), which is actively heated.
[0016] At the same time, water heated to 95-100 ° C is supplied under pressure through the nozzle (12). The pressure, in its turn, is created by the pump (17) and the water is heated in series in the heat exchangers (3) and (4).
[0017] Heated or superheated water is injected into the flow of high-temperature exhaust gases and, in contact with a hot splitter (13) and gases, actively turns into steam and increasing pressure and speed in the nozzle part (11), changes the direction of movement by 90 ° in the vortex chamber (14) and precipitates formed slag and soot, due to mass differences and centrifugal force.
[0018] Next, the steam enters the blades of the steam turbine (6) where it is converted into mechanical energy, namely into a rotating motion which is transmitted to the electric generator (9).
[0019] Next, the exhaust steam enters the condenser (7) where it condenses into water. For active steam condensation in the working area, the condenser (7) is provided with a cooling liquid circulation system (8) in which liquid is supplied from the heating systems of domestic and technological consumers, sea water (in case of use on ships) or other cooled liquid.
[0020] To stabilize the pressure, the steam turbine is provided with an overpressure valve (15) and a silencer (16).
[0021] To clean the condensed liquid in the water supply system, it is provided with a filter (18).
[0022] An electrically driven turbo compressor (19) is provided to create excess pressure in the diesel engine power supply system. 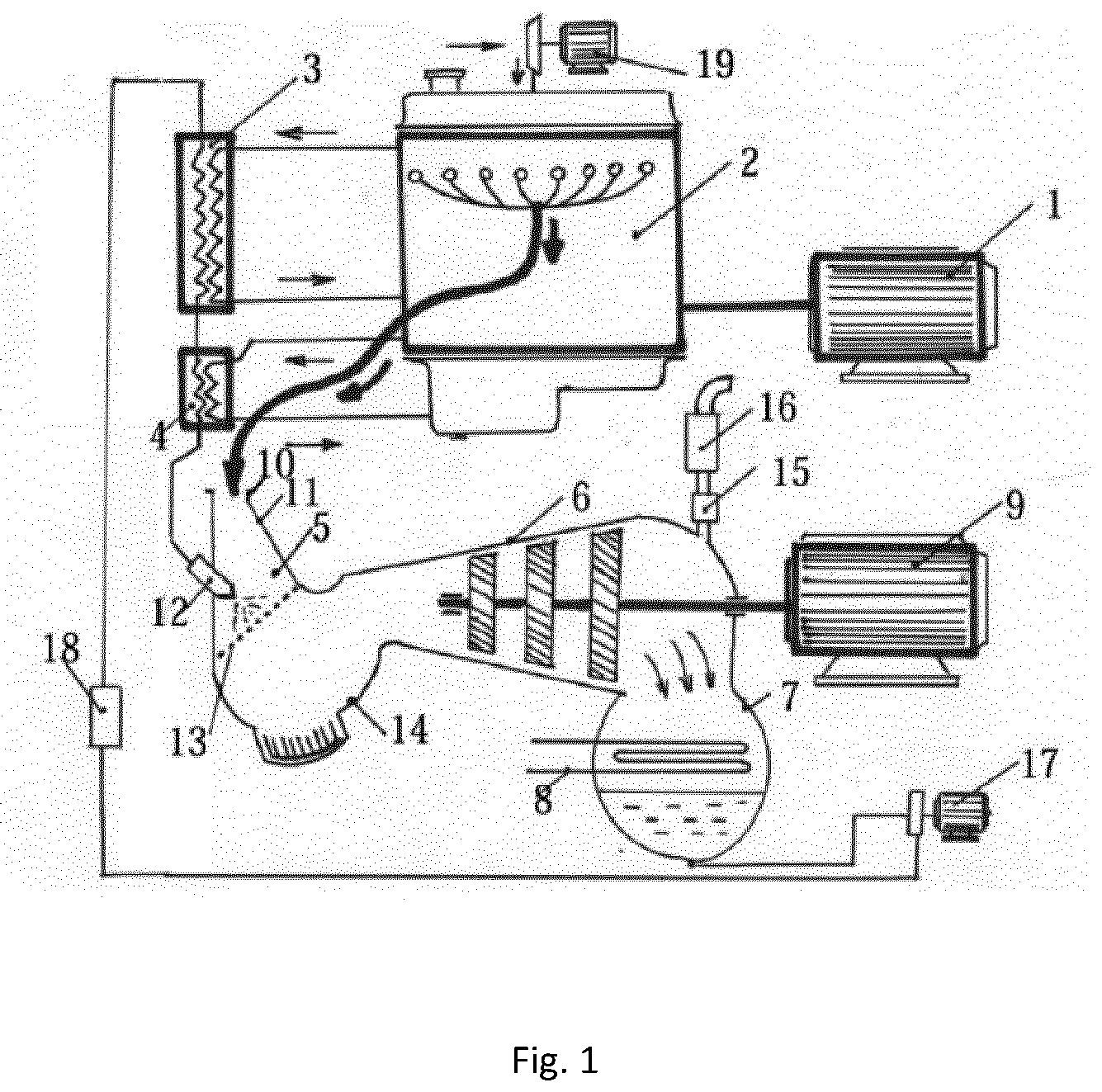 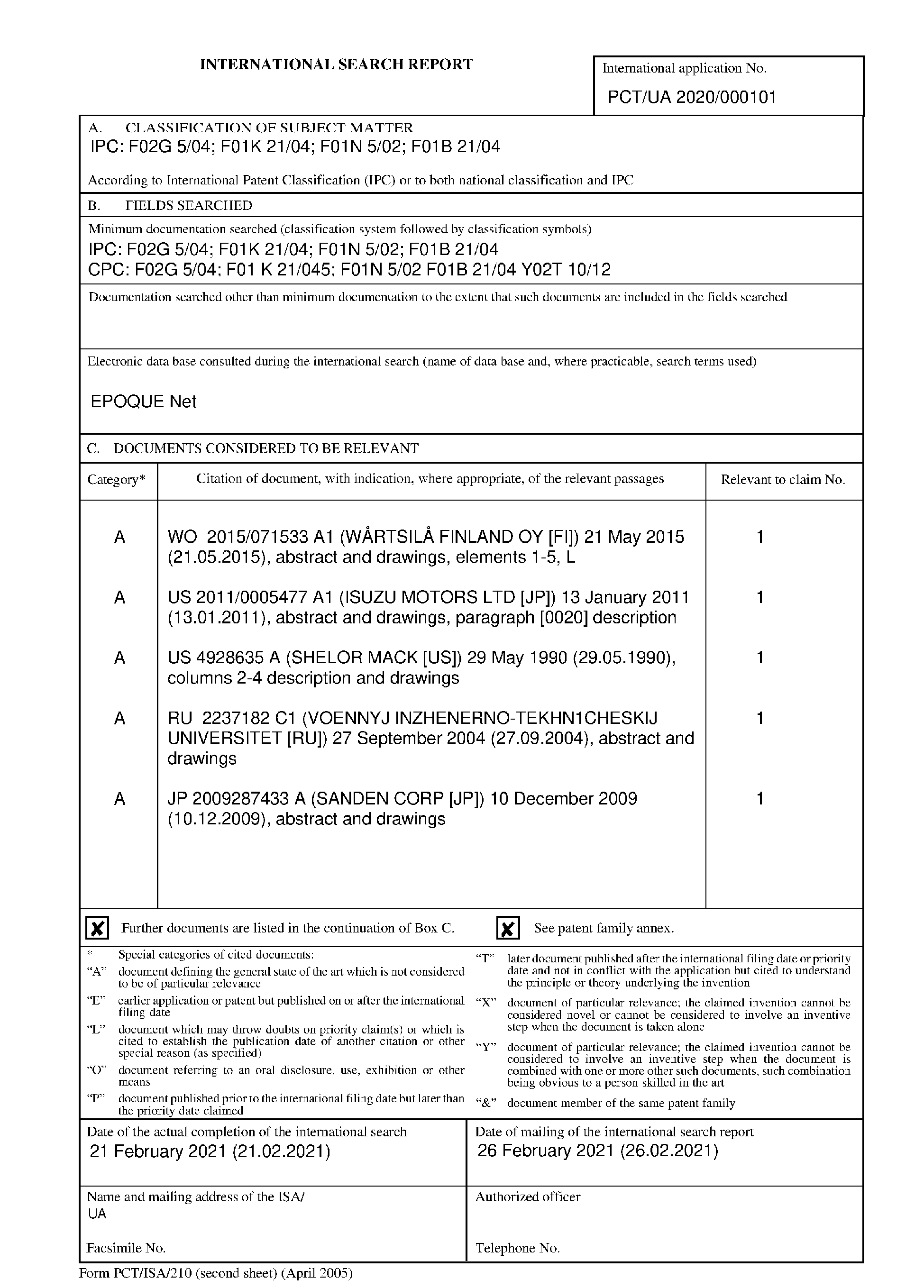 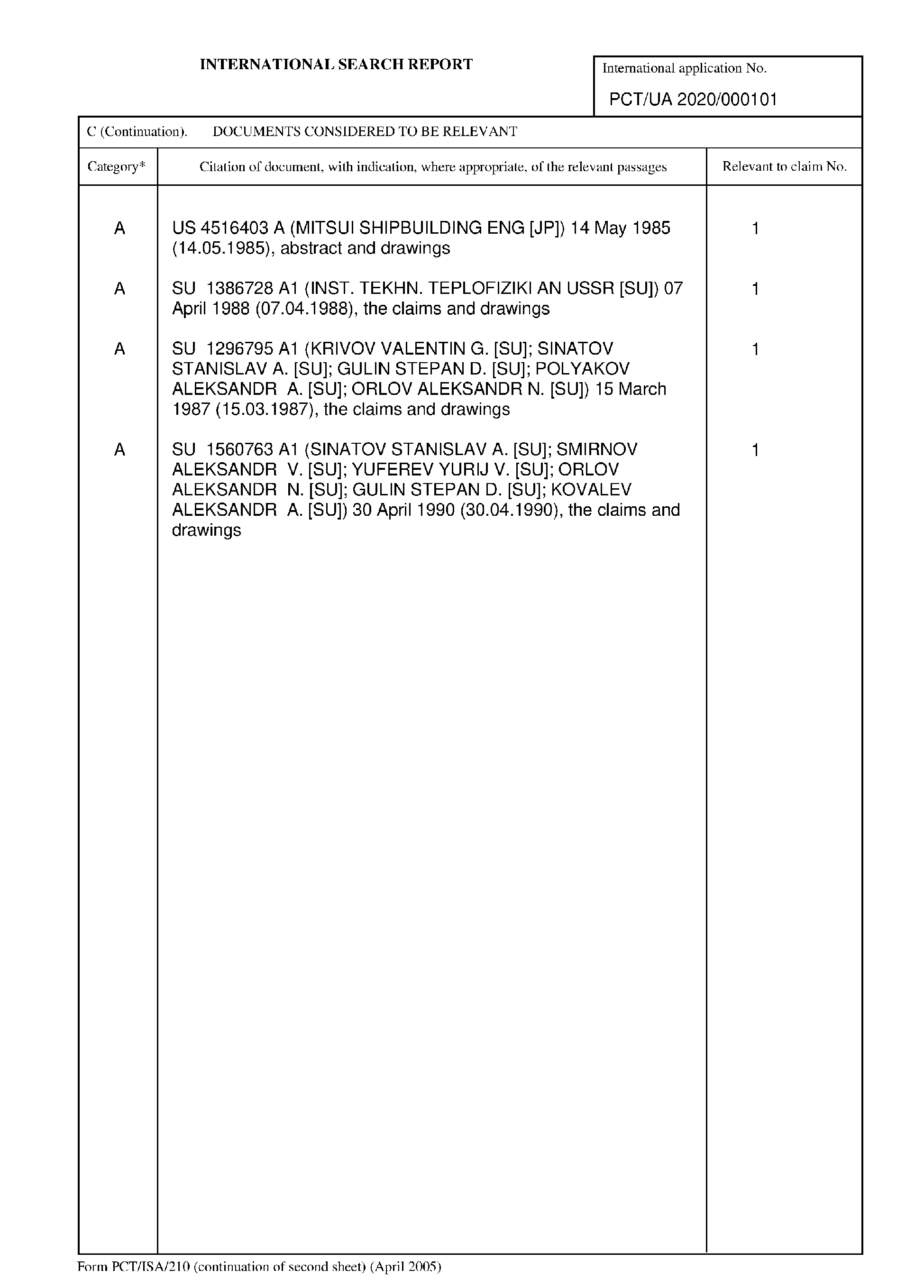 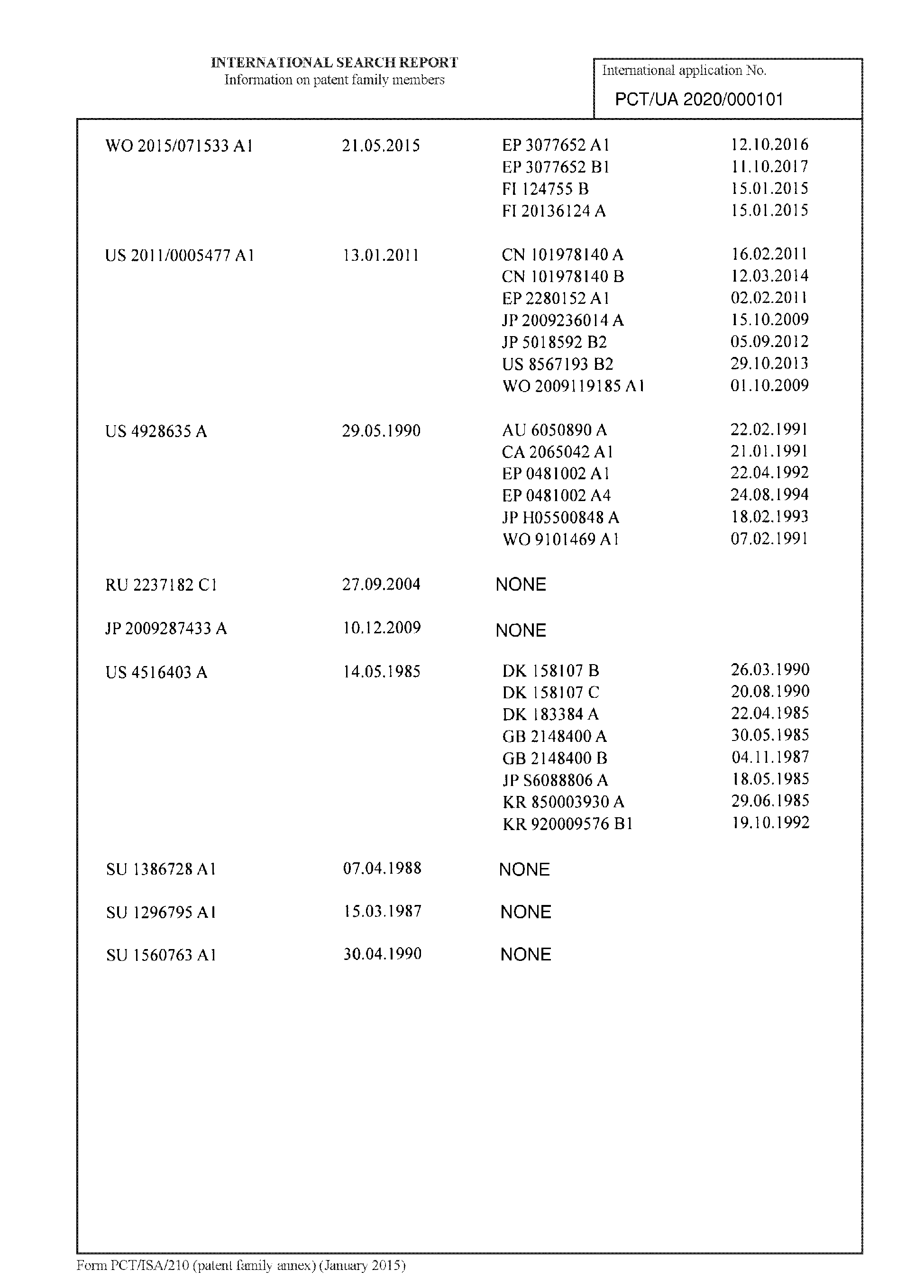