[0001] The present disclosure relates to a tumor-targeting Salmonella gallinarum strain and a use thereof.

[0002] Cancer is one of the most common causes of death, and recently, the incidence of cancer is on the rise due to environmental factors including environmental pollutants such as air pollution, and personal factors including high-fat intake due to westernization of diet, drinking alcohol, and smoking increase. Therefore, the development of anticancer materials for early prevention and treatment of cancer is becoming important. Compound-based anticancer drugs act on cancerous cells, but often exhibit non-specificity affecting the whole body, with the problem of adverse effects.
[0003] Since bacterial suppression of cancer has been reported, studies have been conducted into strains exhibiting anticancer effects. In the last 20 years, studied have been focused on the use of viable bacteria for cancer therapy, finding diverse variants of Bifidobacterium, Clostridium, Lactococcus, Shigella, Vibrio, Listeria, Escherichia, and Salmonella spp. in cancer animal models. However, the basic mechanism of cancer treatment using such strains is not fully understood yet.
[0004] Among them, Salmonella spp. have been studied for use as an anticancer target carrier and use for inhibiting cancer growth (patent document 1). However, the Salmonella strains studied previously exhibit low cancer cell targeting rates because of their distribution in various organs as well as cancerous cells. In addition, adverse effects are caused by the strains themselves. Particularly in patients or the elderly with weakened immune function, even the Salmonella strain of lowered pathogenicity may cause fatal sepsis. In addition, the conventional Salmonella strains have difficulty in achieving effective therapy and delivering anticancer substance into cells due to their low viability in cancer tissues.
[0005] With respect to Salmonella gallinarum strains, a vaccine composition and a feed composition for prevention of fowl typhoid are disclosed (patent document 2), but nowhere is the cancer treatment efficacy of the strains described.
[0006] Leading to the present disclosure, intensive and thorough research conducted by the present inventors resulted in the finding that an attenuated Salmonella gallinarum strain deficient in guanosine tetraphosphate (ppGpp) synthesis exhibits superiority in targeting and viability for cancer cells, but inferiority in targeting and viability for normal organs, compared to conventional Salmonella typhimurium strains and as such, can be effectively used for cancer therapy.

[0059] According to the tumor targeting Salmonella gallinarum strain and the use thereof, the strain has excellent inhibitory activity against tumor growth and can specifically target tumors, thus finding advantageous applications in tumor therapy and imaging without adverse effects.

FIG. 5 shows (A) images of bioluminescence signals expressed with time from the GlmS+pLux plasmid transformed into the ppGpp-deleted Salmonella gallinarum strain (SG4032) including the wild-type glmS and the ppGpp-deleted Salmonella gallinarum strain (SG4033) lacking glmS, which targeted CT26 tumor tissues after intravenous injection (ca. 1×108 CFU) and (B) a graph of fractions of Salmonella strains including the GlmS+pLux plasmid seven days after injection of the Salmonella strains.

FIG. 6 shows (A) a plot of tumor volumes with time in CT26 cell-implanted BALB/c mice to which ca. 1×108 CFU of the ΔppGpp Salmonella gallinarum (SG4023) or ca. 1×107 CFU of the Salmonella typhimurium strain (SMR2130) was intravenously injected, (B) images illustrating changes of the implant tumors, and (C) a plot of survival rates of the mice.

Best Mode for Carrying out the Invention

[0062] Salmonella spp. were grown at 37°C in LB medium containing 1% NaCl (Difco Laboratories) under vigorous aeration. A solid support medium was prepared with 1.5% granule agar (Difco Laboratories). Antibiotics were purchased from Sigma Chemical. If necessary, the antibiotics ampicillin, kanamycin, and chloramphenicol were added at respective concentrations of 50 µg/ml, 50 µg/ml, and 15 µg/ml and N-acetyl-D-glucosamine (GlcNAc) was added at a concentration of 100 mg/ml. The bacteria in the broth were roughly estimated using a hemocytometer.

[0063] Serotype gallinarum variants were originated from the clinical isolate SG 4021 from the livers of chickens with fowl typhoid, bred in a Korean farm (Table 1), and the SG4021 strain was deposited with the Korean Research Institute of Bioscience and Biotechnology (microorganism accession number: KCTC13985BP) on October 8, 2019.
[TABLE 1]

[0064] All the Salmonella strain lineages were constructed according to the method developed by Datsenko and Wanner (Proceedings of the National Academy of Sciences 97.12 (2000): 6640-6645.), and the attenuation of Salmonella strains was induced by ppGpp deletion (ΔppGpp). The ppGpp deleted mutation was made by sequentially introducing relA::kan and spoT::cat into the genome of SG4021. In the glmS open reading frame, the gene carrying kan or cat was produced by PCR amplification using a pair of 60-nt primers, each including a 40-nt homology extension and a 20-nt priming sequence, with pKD13 serving as a template (Table 2).
[TABLE 2]

[0065] Then, the purified PCR amplicons were transformed by electroporation into a Salmonella strain containing a lambda Red helper plasmid (pKD46). The mutants were confirmed by PCR using original and general test primers. Before induction of SG4023 from SG4022, the antibiotic resistant gene was deleted using a helper plasmid carrying pCP20, which is a FLP recombinant enzyme.
[0066] In addition, glmS deleted mutants were produced by the method developed by Datsenko and Wanner (Proceedings of the National Academy of Sciences 97.12 (2000): 6640-6645.) (Kaiser et al., Microbiology, 146 Pt 12: 3217-3226, 2000). Salmonella cells are prone to releasing a plasmid carrying a reporter gene unnecessary for survival particularly in animals, but it is difficult to employ an antibiotic resistant gene for a selection determinant. Thus, use was made of glmS deleted mutant phenotypes that are lysed in the animal system due to the insufficiency of the peptidoglycan constituent D-glucosamine (GlcN) or N-acetyl-Dglucosamine (GlcNAc) which is an essential nutrient for. The red recombinase system of bacteriophage lambda was used to inactivate the genomic glmS gene in the Salmonella gallinarum strain.

[0067] To assay tumor targeting capability through bioluminescence and compensate for glmS deleted mutation on the chromosome, the balanced-lethal host-vector system having the glmS gene of Salmonella gallinarum incorporated thereinto was constructed.
[0068] Briefly, pLux carrying the lux operon (luxCDABE, ca. 9.5kb) of Photobacterium leiognathid was inserted into the XbaI restriction enzyme site of a pUC19 plasmid backbone. For use in constructing a plasmid carrying both a lux operon cassette and glmS, the glmS gene of Salmonella gallinarum was amplified using the primers of Table 3.
[TABLE 3]

[0069] The amplified 1.8 kb fragment was digested with Sal I and ligated to the same site of a pLux vector to construct GlmS+pLux. The glmS deleted mutant Salmonella strain transformed with the GlmS+pLux plasmid construct survives even an environment in D-glucosamine (GlcN) and N-acetyl-Dglucosamine (GlcNAc) and exhibits bioluminescence to allow for analysis through optical bioluminescent imaging.

[0071] Passage (1/1000) was made overnight in a flesh LB medium which was supplemented every 12 hours. Samples were taken every 24 hours and diluted. A suitable volume was spread three times over GlcNAc-supplemented LB plates irrespective of the presence or absence of ampicillin. Using the number of colonies thus formed, fractions of Salmonella spp. having the plasmid in total viable cells (colony forming unit, CFU) were calculated.

[0072] The cultured, various tumorous cells were xeno-grafted into the right thigh of each mouse to construct mouse tumor models. From Samtako Company (Korea), male mice at 5 to 8 weeks of age, each weighing 20 to 30 g, were purchased. Management, experiments, and euthanasia were performed on all the animals according to an approved protocol.
[0073] Mice with subcutaneous tumor were constructed as follows: the in vitro cultured tumor cells of Example 1-4 were harvested and suspended in 30 µl of PBS, followed by subcutaneous injection of 1×106 cells of each of CT26, 4T1, and B16F10, and 1×107 cells of ASPC1 into right thighs of the mice. For hetero-implantation of tumor cells, injection was made of CT26 and 4T1 cells into BALB/c mice, B16F10 cells into C57/BL6 mice, AsPC-1 cells into BALB/c athymic nu-/nu- mice.
[0074] When the tumor size reached 0.5 cm3 after implantation of tumor cells (about 14 days after implantation), the ppGpp-deleted Salmonella gallinarum strain with mutation glmS of Example 1-2 including GlmS+pLux of Example 1-3 or Salmonella typhimurium were administered at a dose of about 1×107 or about 1×108 CFU/ml of PBS via tail vein (0 day, 0 dpi).

1-7. Assay for distribution of Salmonella spp. in mouse internal organ

[0075] To evaluate the number of live Salmonella spp., ΔppGpp Salmonella typhimurium and ΔppGpp Salmonella gallinarum strain were intravenously at ca. 1×107 CFU and at ca. 1×108 CFU, respectively, into mouse groups (n = 5). Days 1, 5, 10, and 16 after injection, the mice were sacrificed. Organs were excised and homogenized by a homogenizer in sterile PBS containing 0.05% Tween-20. Salmonella spp. were recovered from the homogenate and plated onto agar plates containing 50 µg/ml kanamycin and 15 µg/ml chloramphenicol.

[0076] Tumor volumes were calculated according to the following formula.
[0077] Tumor volume (mm3) = (tumor length × tumor height × tumor width)/2
[0078] All animal experiments were approved by the Chonnam National University Institutional Animal Care and Use Committee (NO. CNU IACUC-H-2016-15). According to the instruction, mice with a tumor volume of 1,500 mm3 or larger were sacrificed, and the survival rates of mice were evaluated according to the Gehan-Breslow-Wilcoxon test.

[0080] In order to stain Salmonella strains in tumors, the isolated tissues were fixed overnight at room temperature with 3.4 % paraformaldehyde in PBS and embedded into Optimal Cutting Temperature compound (OCT; Tissue-Tek). Subsequently, the tissues were frozen and sectioned into 7-mm thick slices using a microtome-cryostat. The tissue slices were collected on aminopropyl triethoxysilane-coated slides. The slides were washed with PBS (pH 7.4) to completely remove OCT and incubated overnight at 4°C with an anti-Salmonella LPS antibody (1 : 100, Abcam # ab8274). Thereafter, Alexa Fluor 568-conjugated goat anti-mouse (1 : 100, Life Technologies A11031) antibody and Alexa Fluor 488-conjugated Phallodin (1 : 1000, Invitrogen # W21404) were used as secondary antibodies to detect F-actin. After the nuclei were stained with DAPI/Antifade (1 : 200, Invitrogen), the samples were mounted. Stained images were captured using Zeiss confocal microscope LSM 510 (Zeiss Laboratories), and representative images are given unless otherwise stated.

EXAMPLE 2. Assay for In vivo Toxicity of Salmonella gallinarum strains and for Plasmid Stability

2-1. Assay for in vitro toxicity of Salmonella gallinarum strains

2-2. Determination of dosage according to in vivo toxicity of attenuated Salmonella gallinarum strain

[0084] Since the wild-type Salmonella gallinarum strain was observed to exhibit in vivo toxicity in Example 2-1, Salmonella gallinarum strain was attenuated by blocking the synthesis of ppGpp.
[0085] Briefly, the ppGpp-deleted (ΔppGpp) mutant Salmonella gallinarum strains of Example 1-2 in which both ppGpp synthetase I and II respectively encoded by relA and spoT genes had been mutated, and the Salmonella typhimurium were intravenously injected to BALB/c mice which were then analyzed for survival rate.
[0086] As a result, the mice were observed to survive up to108 CFU of the ΔppGpp Salmonella gallinarum strain (SG4023) (FIG. 1B) and up to about 107 CFU of the ΔppGpp Salmonella typhimurium strain. Meanwhile, similar experiments were carried out with Salmonella typhimurium A1-R that can selectively infect and attack living tumors. As a result, it was observed that strains with modified lipopolysaccharide, msbB-mutation, (VN20009), and ΔrfaG/ΔrfaD double mutation were less prone to induce an immune response in the range of about 106 to about 107 CFU. Mice with tumors were observed to survive the intravenous infection of about 108 CFU of E. coli.
[0087] It was understood from the data that with the assumption that E. coli was almost free of toxicity, the maximal dose of Salmonella spp. that animals free of nonspecific catastrophe can endure was about 108 CFU.

3-1. Examination of tumor targeting according to bioluminescence signal imaging

3-2. Retention of plasmid in mouse 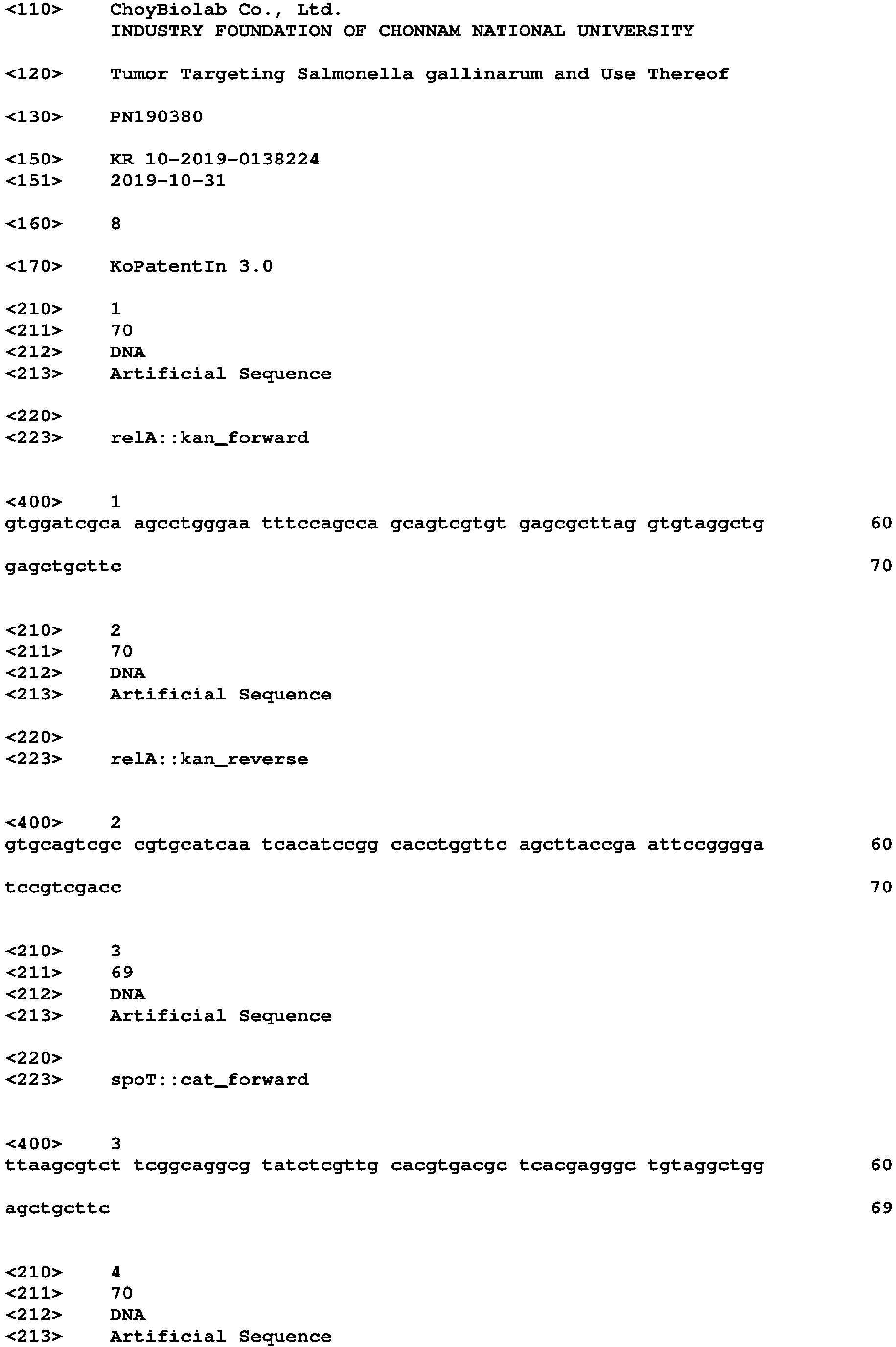 administering the Salmonella gallinarum strain to a subject;

detecting bioluminescence of the strain; and

determining the presence of tumor in the subject if the bioluminescence is detected. 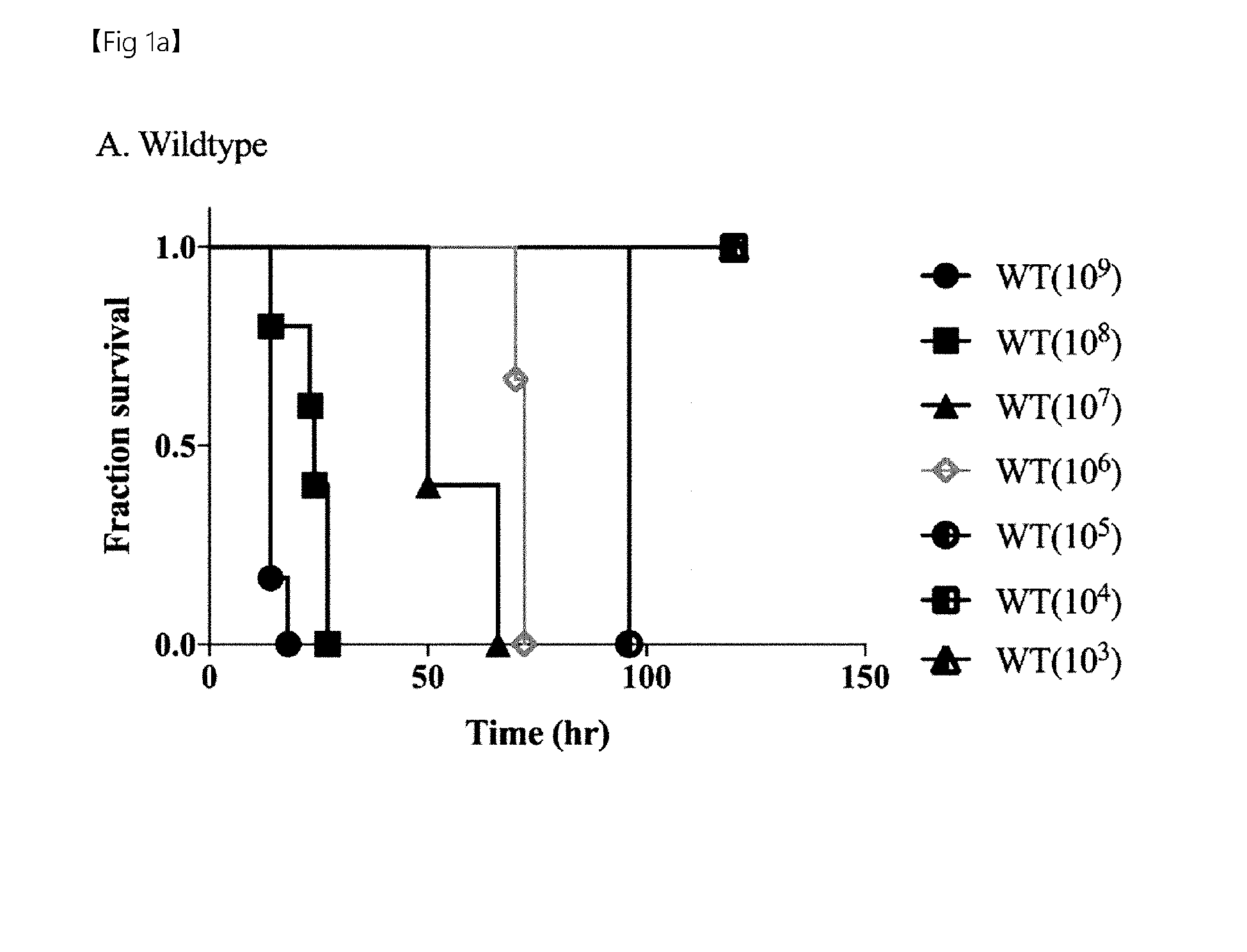 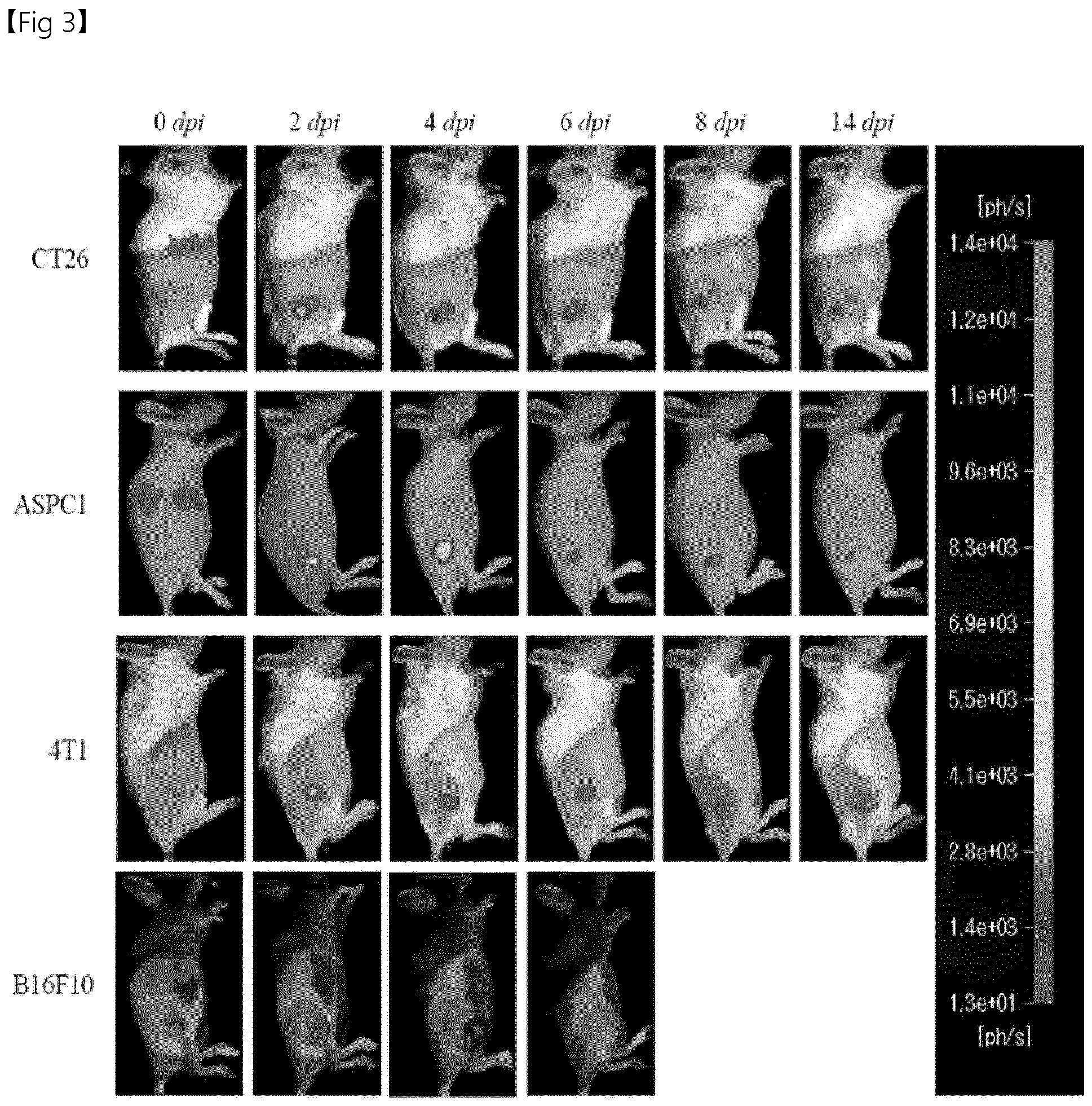 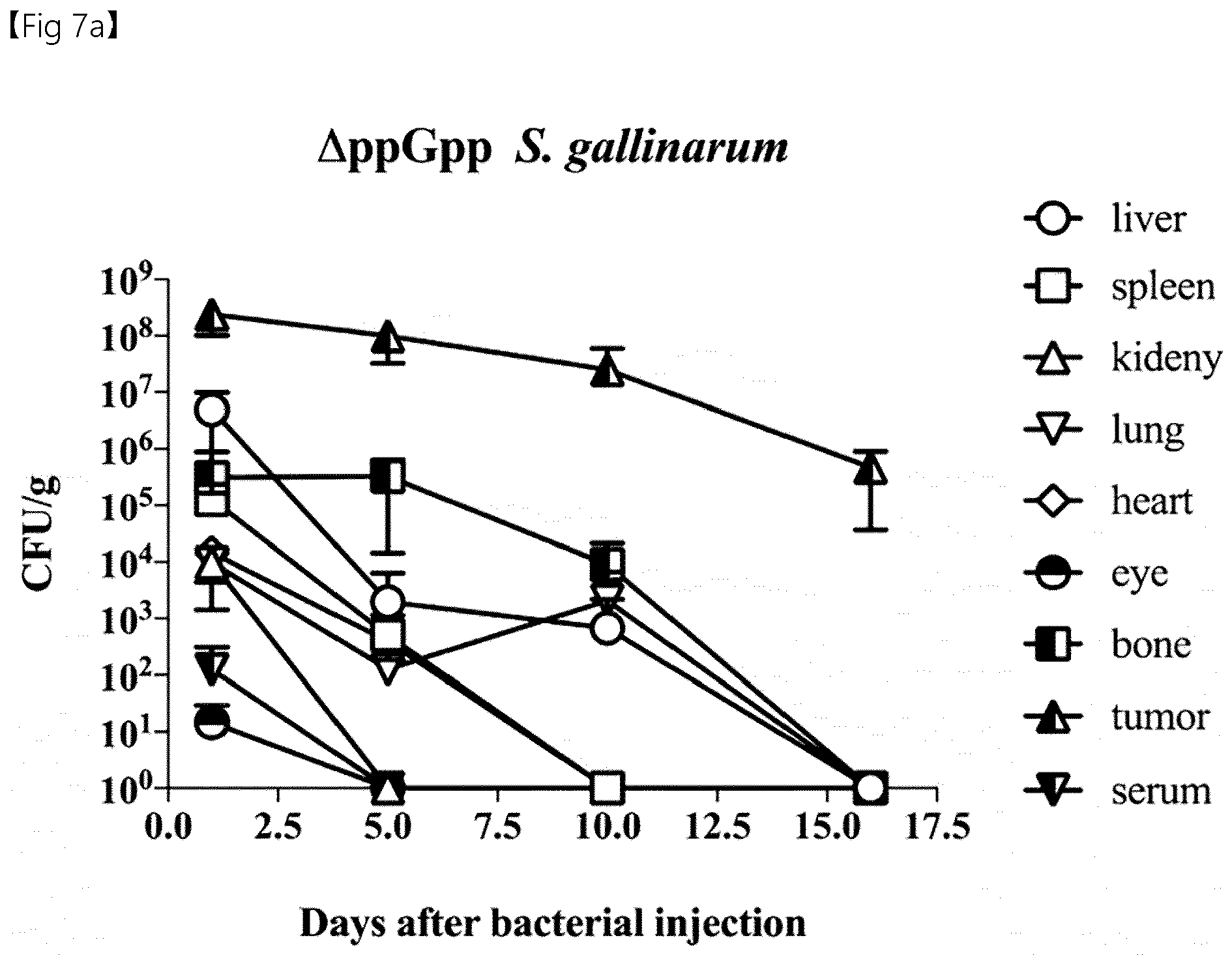 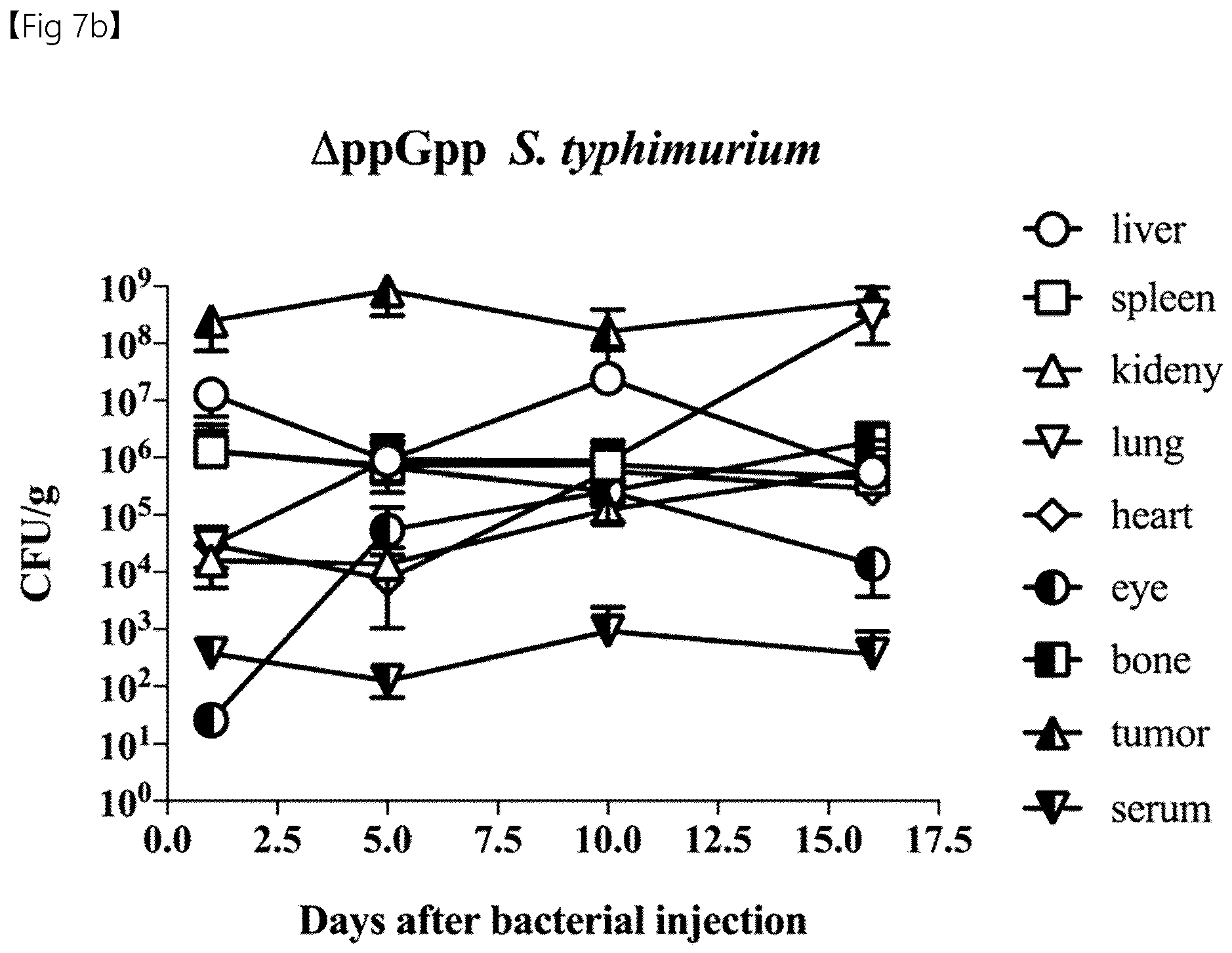 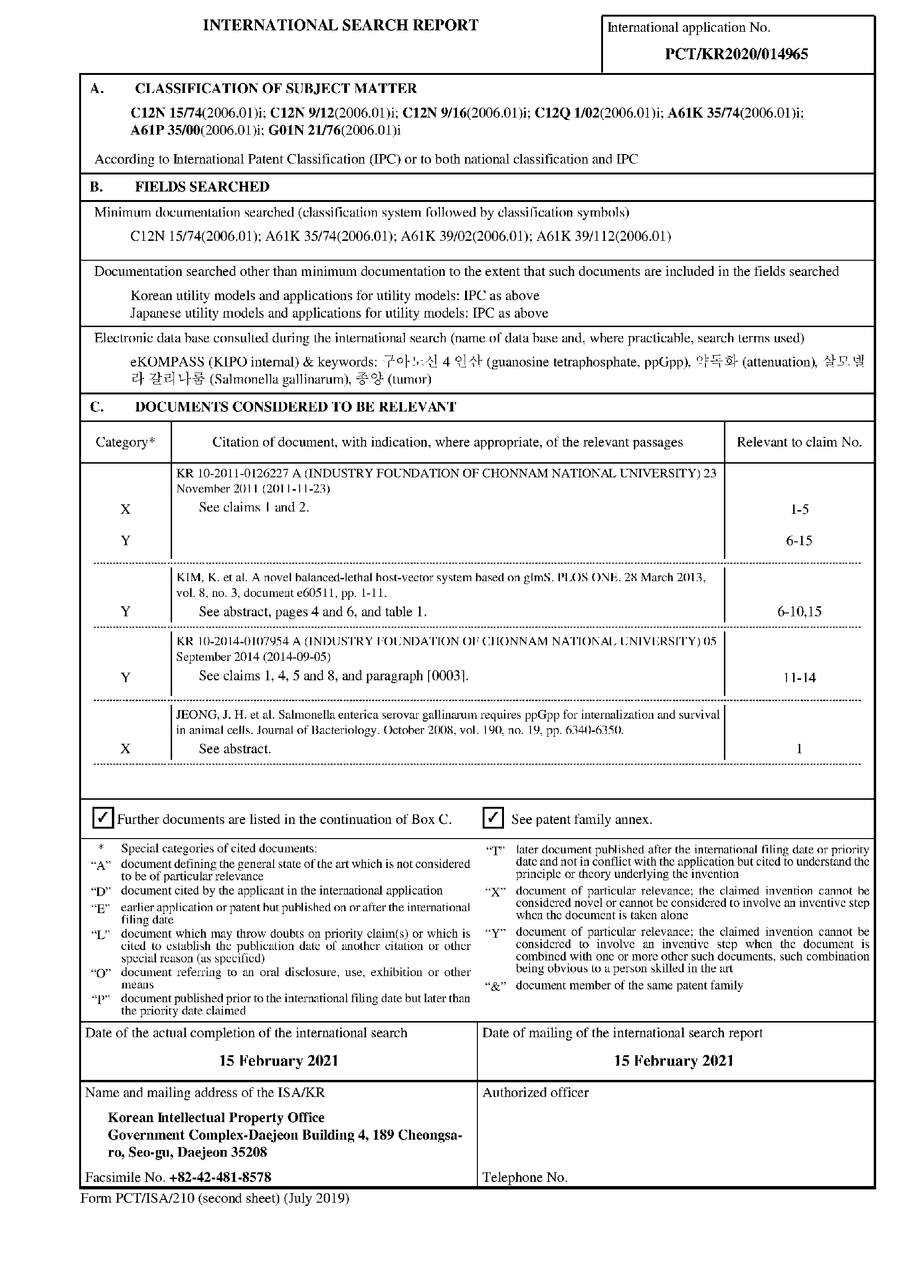