Brief description of the invention

[0024] The technical objective of this invention is the development of a new heat-resistant aluminium material to be used in the form of powder for manufacturing of parts using additive technologies, which has good processability when printed and has increased strength characteristics (ultimate tensile strength of no less than 350 MPa) at room temperature after printing, without any significant decrease in strength after annealing to relieve internal stresses. Also, the material must retain its performance properties at the temperature of up to 300-350°C.
[0025] The technical result is the solution of the set problem and the achievement of the indicated advantages.
[0026] To solve the set problem and achieve the indicated advantages, a new heat-resistant aluminium alloy with the following component content (wt.%) is proposed. at least one element from the group comprising and at least one element from the group comprising
[0027] In addition, it is of particular advantage to maintain the following ratio of the contents of nickel, manganese and iron in the alloy:

[0028] The introduction of nickel and manganese into the alloy ensures a sufficient processibility of the material during printing due to the formation of eutectic phases like Al3Ni or Al16Mn3Ni at high manganese content. The high content of eutectic in the material ensures a sufficient fluidity and resistance to the formation of hot cracks during printing and rapid crystallisation. Also, the phases that form during the solidification have high thermal stability and retain the structure and strength of the material at elevated temperatures. At high cooling rates, the manganese also forms a supersaturated solid solution in the aluminium, which can decompose with a slight increase in strength. The introduction of iron leads to additional strengthening at elevated temperature due to the formation of many intermetallic phases. The nickel content has been increased to form a larger number of phases which, considering the high rates of solidification characteristic of additive technologies, are formed in a compact manner that enables the preservation of the ductility indicators with a simultaneous increase in the strength characteristics at an elevated temperature. The addition of zirconium in the specified amount is necessary to reduce the grain size due to the known modification effect; also, considering the variable solubility of zirconium in aluminium, during further heat treatment, dispersoids of the Al3Zr type will be formed ensuring additional strengthening at the room temperature, which allows retaining the strength characteristics of the material in the process of annealing. Due to their high stability, these dispersoids retain their sizes at the working temperatures of up to 350°C. The upper limit of the range is associated with the fact that an additional increase in the concentration of zirconium raises the temperature of complete melting above 950°C, which will require extra costs for heating and overheating the melt before atomising the powders.
[0029] The introduction of iron in the specified range ensures the presence of Al9FeNi-type spherical particles in the structure, which do not deteriorate the ductility characteristics while ensuring a low rate of strength weakening with increasing temperature. Moreover, the iron does not worsen the hot-tearing characteristics of the material, which allows retaining sufficient processability during printing.
[0030] The condition for the ratio of the content of nickel, iron and manganese in the alloy must be Ni> Mn + Fe, which provides the most optimal combination of strength and ductility properties of the material for printing. When the content of manganese and iron is exceeded, the material has reduced values of the relative elongation and yield stress due to the formation of too many intermetallic phases based on iron and manganese, which do not ensure an effective strengthening.
[0031] Cerium is introduced to partially eliminate the negative effect of iron as cerium can dissolve in iron-containing phases or form a ternary phase with iron with a more favourable morphology, which in the process of printing is likely to form along the boundaries of the grains. Herein, the presence of cerium in the composition reduces the rate of phase coagulation, thus increasing the thermal stability of the structure.
[0032] The elements from the group of copper, magnesium and zinc dissolve well in the aluminium matrix at elevated temperature and room temperature and tend to form oversaturated solid solutions during quick solidification; in small concentrations, these elements ensure solid solution strengthening of the aluminium matrix. This effect persists regardless of the heating and thermal treatment of the material, and the content of the elements was chosen to not exceed too much the equilibrium concentration of the element in the aluminium at room temperature. The increased content of these elements leads to an extension of the crystallisation interval and to crack formation during the printing process.
[0033] The elements from the group of silicon and calcium form additional eutectic phases, which increases the processibility during printing; also, due to a low density, these elements reduce the density of the material, which leads to an increase in the specific strength properties.
[0034] The addition of boron has been excluded from the composition of the alloy, as at high temperatures of melt preparation boron reacts with zirconium forming hard-melting borides that reduce the concentration of zirconium in the solid solution. Moreover, these borides remain in a solid state at atomisation temperatures, which reduces the quality of the powders.
[0035] The addition of chromium has been also excluded, as the higher concentration of zirconium ensures a more efficient strengthening than chromium-based intermetallides. Also, the increased content of zirconium excludes the necessity of an additional introduction of elements, such as molybdenum or tungsten, which, in contrast to zirconium, reduce the ductility properties of the material.
[0036] Images: The drawings show:

Fig. 1. Powder particles from the claimed alloy, produced by atomisation of the melt in the gas flow as per Example 1.

Fig. 2. Printed cubes on a platform.

Examples of embodiments of the invention

[0037] The powders of aluminium alloys of various compositions in accordance with Table 1 were produced by gas atomisation technique.
[0038] The melt was prepared in a gas-heated furnace. For preparation, aluminium of grade A8 as per GOST 11069-2001, magnesium of grade MG90 as per GOST 804-93, copper of grade M1 as per GOST 859-2001, silicon of grade 4001 as per GOST 2169-69, Mn80F20 and Ni80F20 alloy tablets, and binary master alloys of the rest of the elements were used.
[0039] After the melt preparation and control of its chemical composition, the alloy was overheated to the temperature of at least 100°C higher in relation to the equilibrium liquidus and then atomised in nitrogen with the addition of oxygen in an amount not exceeding 0.8% to ensure controlled oxidation.
[0040] The resulting powders were screened to separate the fraction of D50=40 ± 3 µm. The photographs of the powder taken with a scanning electron microscope (SEM) are shown in Fig. 1.
[0041] Selective laser melting of the powder was conducted in an argon environment using EOS M290 (https://www.eos.info/eos-m290). For the tests, cylinders were printed with the length of 80 mm and diameter of 12 mm, which were subsequently machined.

[0042] The room-temperature tensile tests of the samples grown parallel to the building direction were conducted in accordance with the requirements of GOST 1497. Thermal treatment (annealing for internal stress relief) was conducted in the furnace with forced air circulation at temperatures between 250°C and 300°C, which are typical for aluminium alloys.
[0043] The results of elongation tests after printing are shown in Table 2, and those after annealing are shown in Table 3.
Table 2
Table 3

[0044] From comparing the tables, it is evident that in the specified ranges the proposed material has increased strength characteristics immediately after the printing, as well as a low tendency for strength degradation during annealing to relieve the internal stress.

[0045] The powders from aluminium alloys that have a chemical composition shown in Table 4 were produced using the technology described in the previous example, with high purity argon used instead of the nitrogen. The main difference between the alloys is in the ratio of nickel, manganese, and iron.

[0046] EOS M290 3D printer was used for the selective laser melting process. To reduce the residual stresses after printing, annealing was carried out at 300°C. Cubes with the dimensions 10×10×10 mm3 were used as samples to determine the porosity (Fig. 2), and cylinders from which samples were cut out to perform tensile tests in accordance with the requirements of GOST 1497. The porosity was determined using microsections after they had been polished using a colloid mixture without chemical etching.
[0047] Images of the structure are shown in Fig. 3. As can be seen from the images, regardless of the ratio, the porosity of the material is 0.09 to 0.21 vol.% without hot cracks in the structure.
[0048] Also, Table 5 shows the results of tensile tests at room temperature after annealing for each alloy.
Table 5

[0049] From the analysis of Table 5, it follows that when the sum of the elements of manganese and iron is greater than the content of nickel, the material is characterised by 25-40% reduction of the indicators of relative elongation, which is indirect evidence of a reduced ductility of the material. A more brittle material performs worse in the conditions of alternating loads, which is undesirable for the performance of the printed product. Moreover, with an increase in iron and manganese content, the yield strength is reduced by 10%. These effects are explained by the changes in the ratio of phases in the material. An increase in the concentration of iron and manganese leads to the formation of additional phases, which, due to their quantity, reduce the ductility indicators. Also, phases with manganese and iron can bind small amounts of nickel, which leads to the formation of phases with a lower strengthening effect than a phase of the Al3Ni type.
[0050] In this regard, it would be of particular advantage to fulfil the condition that the nickel content must be higher than the sum of the iron and manganese content.

[0051] The powder with chemical composition according to Table 6. The powder was produced by atomising at the temperature that was 80 degrees higher than the liquidus temperature in the environment of nitrogen with the addition of 0.3% of oxygen. The powder was screened to separate the fraction of +15\-63 µm.
Table 6

[0052] EOS M290 3D printer was used for the selective laser melting process. The printing process was carried out in the argon environment, the speed of the laser beam scanning of the powder surface was 400 to 1200 mm/s with the laser power of 280 to 320 W. The maximum layer thickness was 45 µm. The products used were 24 cylinders with a diameter of 12 to 30 mm and a length of 80 mm. At the end of the printing process, the manufactured products were machined to obtain the geometry of the samples for the tensile test to comply with the requirements of GOST 1497 (for tests at room temperature) and GOST 9651 (for tests at elevated temperatures). Before the machining, the products had been annealed to relieve the internal stresses during printing related to higher (more than 1000 K/s) cooling rates after melting with the laser beam. The results of the tensile tests are shown in Table 7.
Table 7 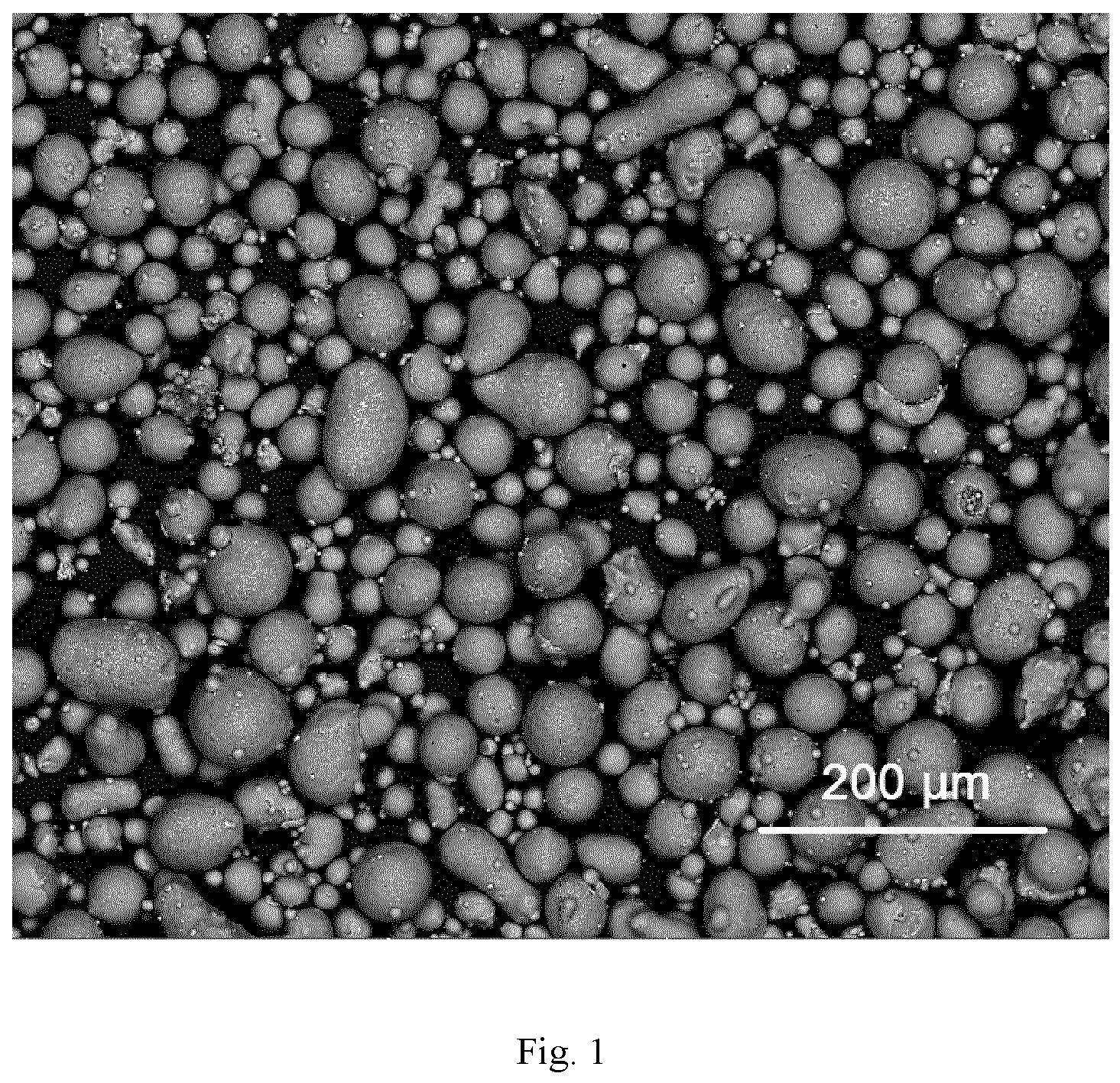 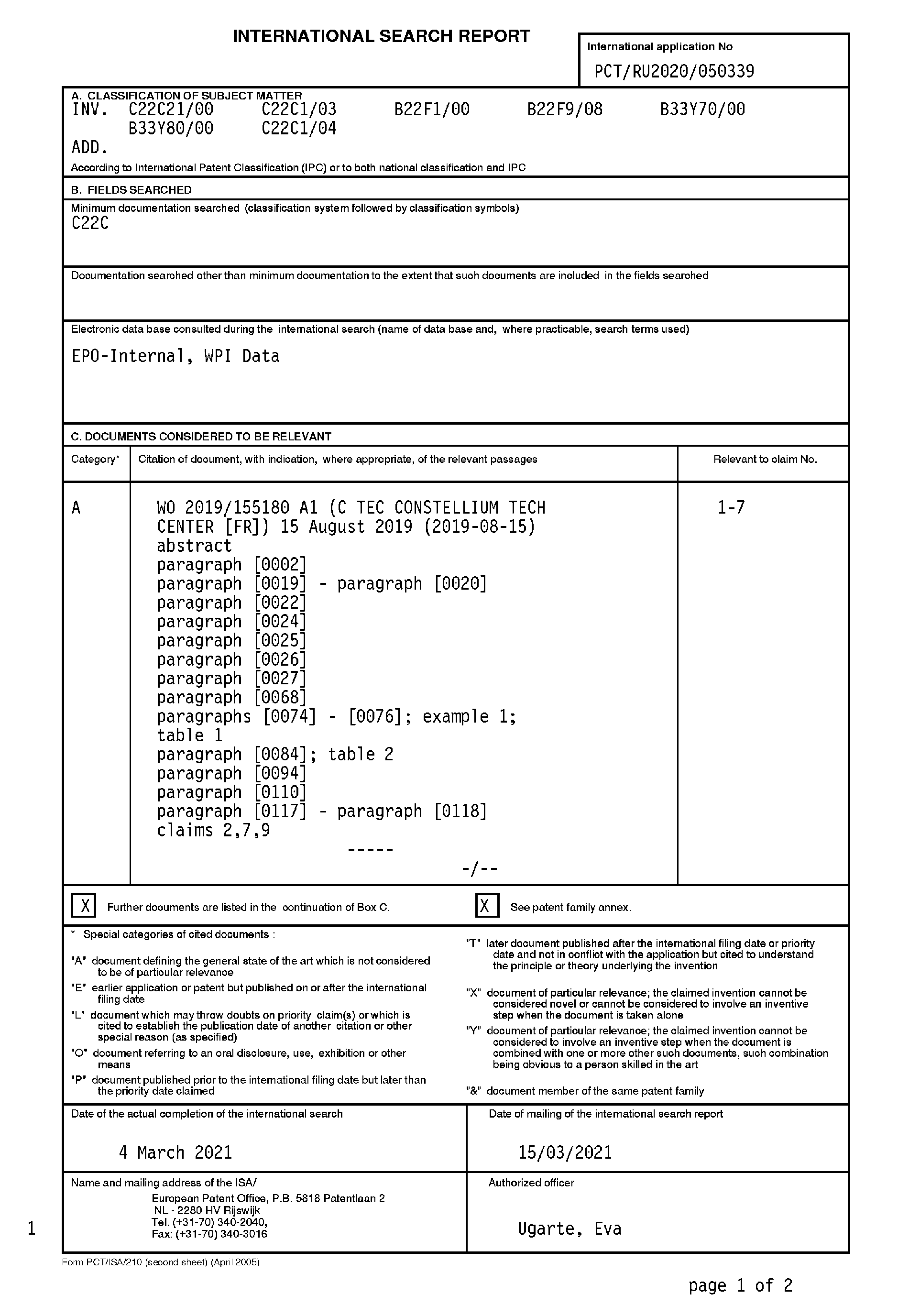 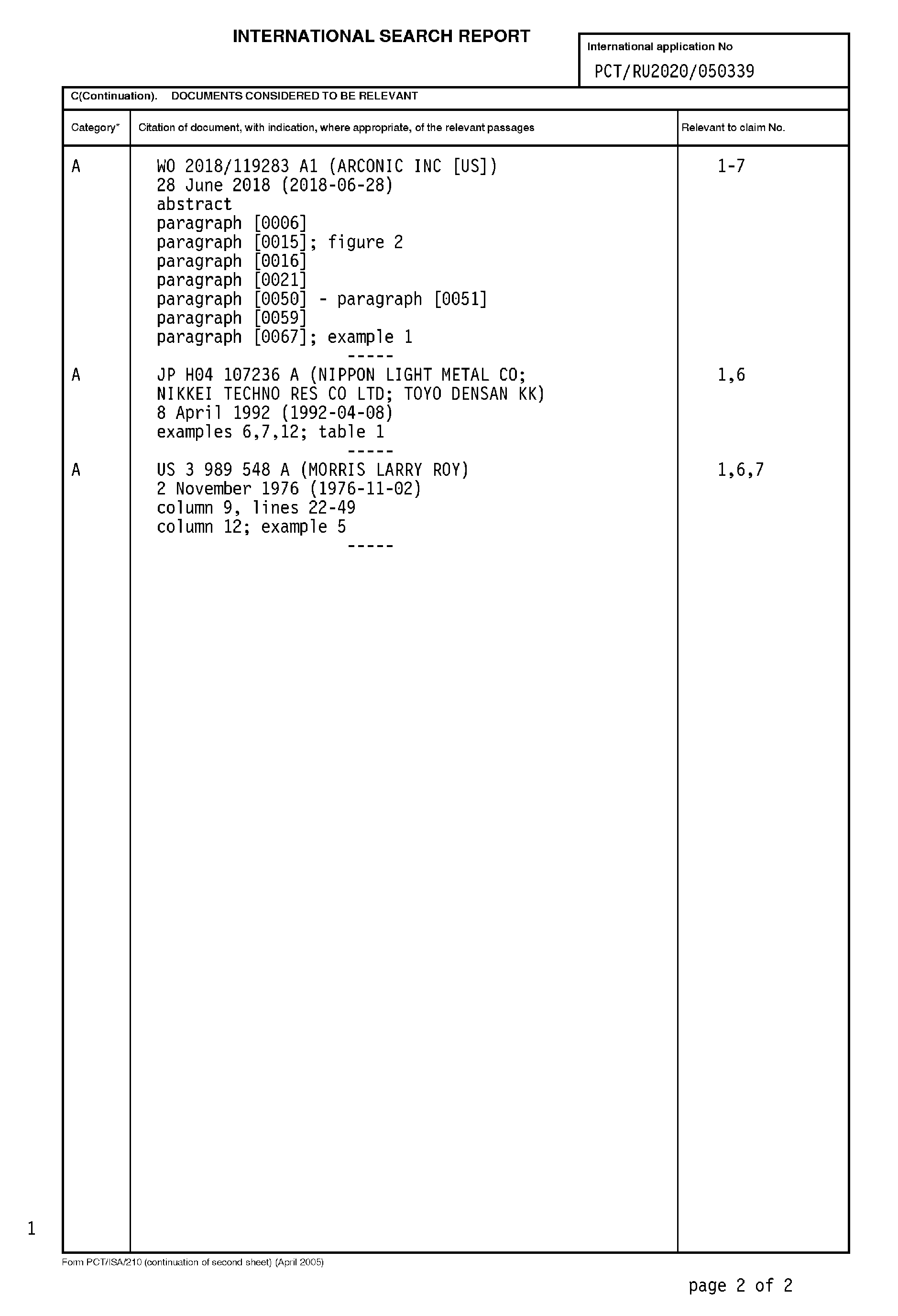 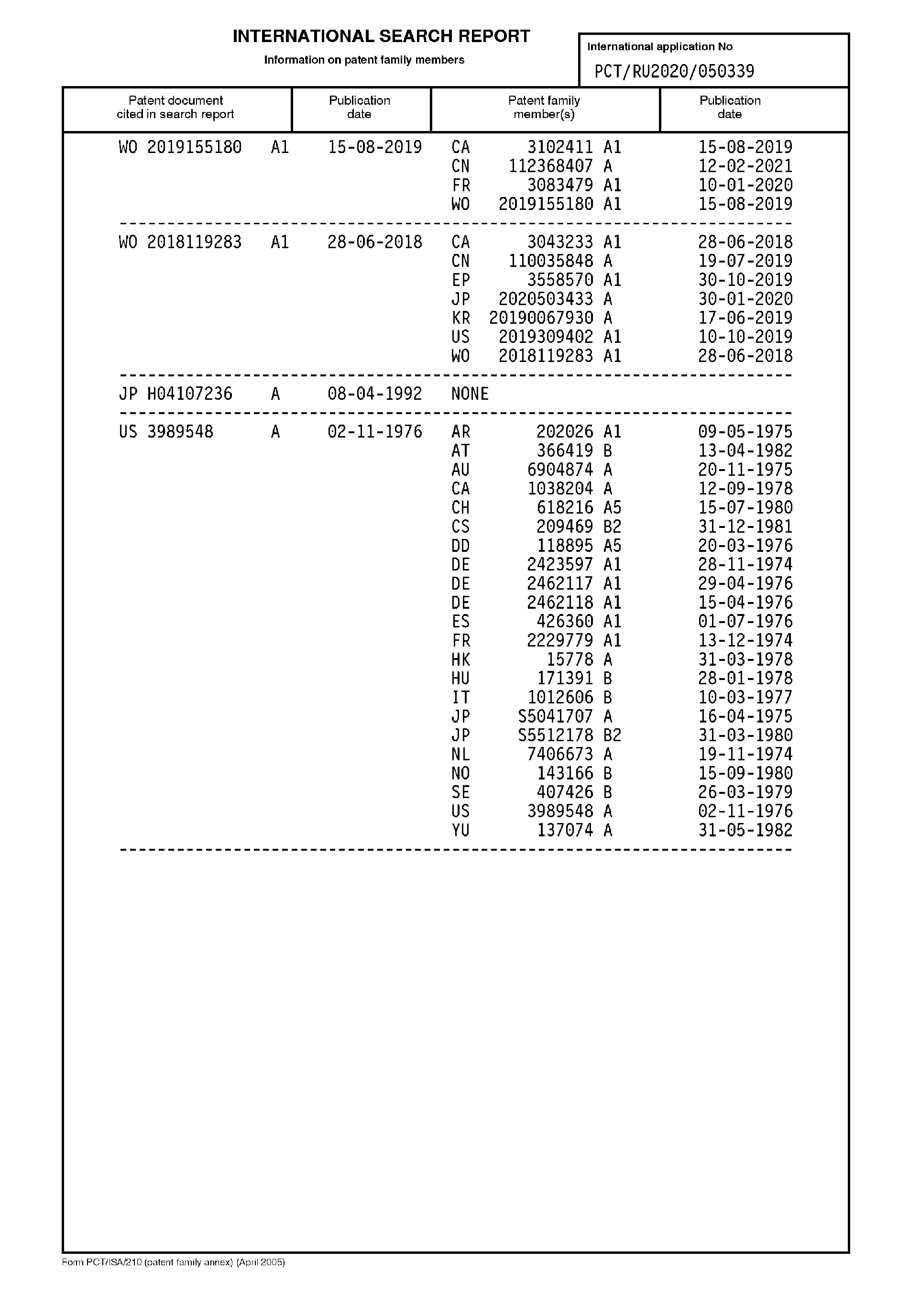