[0001] Computing system functionality can be enhanced by a computing system's ability to be interconnected to other computing systems via network connections. Network connections may include, but are not limited to, connections via wired or wireless Ethernet, cellular connections, or even computer to computer connections through serial, parallel, USB, or other connections. The connections allow a computing system to access services at other computing systems and to quickly and efficiently receive application data from other computing systems.
[0002] Some computing systems communicate using ad-hoc mesh networks, which are typically wireless decentralized networks where the various nodes in the mesh network identify neighbor nodes to add to the network. One example of such a network is a code division multiple access (CDMA) mobile ad-hoc network (MANET).
[0003] Often, mesh networks may be implemented in a contested environment where communication of desired signals is hampered due to the presence of interference, including intentional jamming interference, ambient noise, unintentionally interfering systems such as cell towers, etc. To ensure that communications can be properly received, systems attempt to transmit signals that will be received by a receiver at a target signal-to-noise ratio (SNR). The SNR is often expressed as Eb/N0, where Eb is the energy per bit, and No is the noise power spectral density, which is noise power at the remote receiver node divided by a spread bandwidth. Achieving this target SNR, or at least an acceptable SNR can be accomplished using feedback from receivers in the mesh network. In particular, the receivers will measure a SNR of a received signal and provide feedback to a transmitter transmitting the signal. The transmitter can then adjust the power and the data rate, often times referred to herein as PAR or power and rate, at which the signal is being transmitted to attempt to achieve a target SNR or acceptable SNR.
[0004] For the feedback to be most effective, it is important that the measured SNR is able to be correlated with a known PAR. That is, for the transmitter to make appropriate adjustments to PAR it is useful to know the PAR at which the signal was sent and to be able to correlate that with the SNR where the signal is received. PAR control is a task that relies heavily on accurate SNR feedback, especially in highly dynamic scenarios where PAR can change drastically as link conditions and user demands change.
[0005] Previously, to accomplish this functionality, a receiver was required to make a determination of when the PAR changes occurred at the transmitter. Note that rate changes are easy to detect, but a rate change does not necessarily mark a change in a tracking interval for determining SNR, as PAR changes can be made in concert to maintain the same effective ratio. Also, power changes are extremely difficult to detect since there could be changes in the link attenuation or antenna gains in addition to changes in the transmitter power. Some systems use synchronized timing schemes to coordinate PAR tracking intervals.
[0006] In other systems, the power and rate values are included in header messages. However, this practice increases the overhead beyond what is needed, especially when the header is sent at a reduced rate from the payload data
[0007] However, it would be useful to allow for asynchronous protocols to be used but to nonetheless have the ability to correlate measured SNR with PAR of a transmitted signal.
[0008] The subject matter claimed herein is not limited to embodiments that solve any disadvantages or that operate only in environments such as those described above. Rather, this background is only provided to illustrate one exemplary technology area where some embodiments described herein may be practiced.

[0009] One embodiment illustrated herein includes a method for indicating to a receiver node in a network that the receiver node should begin tracking signal to noise ratio (SNR) of a received signal for a new power and rate (PAR) interval for data sent from a transmitter node. The method includes determining that a new PAR interval is beginning. The method further includes adding an identifier to a data block. The identifier corresponds to the new PAR interval. The method further includes sending the data block from the transmitter node to the receiver node, where the receiver node will use the identifier to determine that a new tracking interval of SNR should be performed for the data block and subsequent data blocks having the identifier.
[0010] This Summary is provided to introduce a selection of concepts in a simplified form that are further described below in the Detailed Description. This Summary is not intended to identify key features or essential features of the claimed subject matter, nor is it intended to be used as an aid in determining the scope of the claimed subject matter.
[0011] Additional features and advantages will be set forth in the description which follows, and in part will be obvious from the description, or may be learned by the practice of the teachings herein. Features and advantages of the invention may be realized and obtained by means of the instruments and combinations particularly pointed out in the appended claims. Features of the present invention will become more fully apparent from the following description and appended claims, or may be learned by the practice of the invention as set forth hereinafter.

[0012] In order to describe the manner in which the above-recited and other advantages and features can be obtained, a more particular description of the subject matter briefly described above will be rendered by reference to specific embodiments which are illustrated in the appended drawings. Understanding that these drawings depict only typical embodiments and are not therefore to be considered to be limiting in scope, embodiments will be described and explained with additional specificity and detail through the use of the accompanying drawings in which:

Figure 1 illustrates half of a bidirectional link between two nodes, forming a portion of a network;

Figure 3 illustrates a receiver node; and

Figure 4 illustrates a method of indicating to a receiver node in a network that the receiver node should begin tracking signal to noise ratio (SNR) of a received signal for a new power and rate (PAR) interval for data sent from a transmitter node.

1. A method of indicating to a receiver node in a network that the receiver node should begin tracking signal to noise ratio (SNR) of a received signal for a new power and rate (PAR) interval for data sent from a transmitter node, the method comprising:

determining that a new PAR interval is beginning;

adding an identifier to a data block, the identifier corresponding to the new PAR interval; and

at the black hardware at the transmitter node, receiving the data, the data having the identifier encoded in the data; and

the red hardware at the receiver node receiving the FEC decoded data to obtain the identifier; and

the red hardware at the receiver node accumulating SNR based on the identifier. 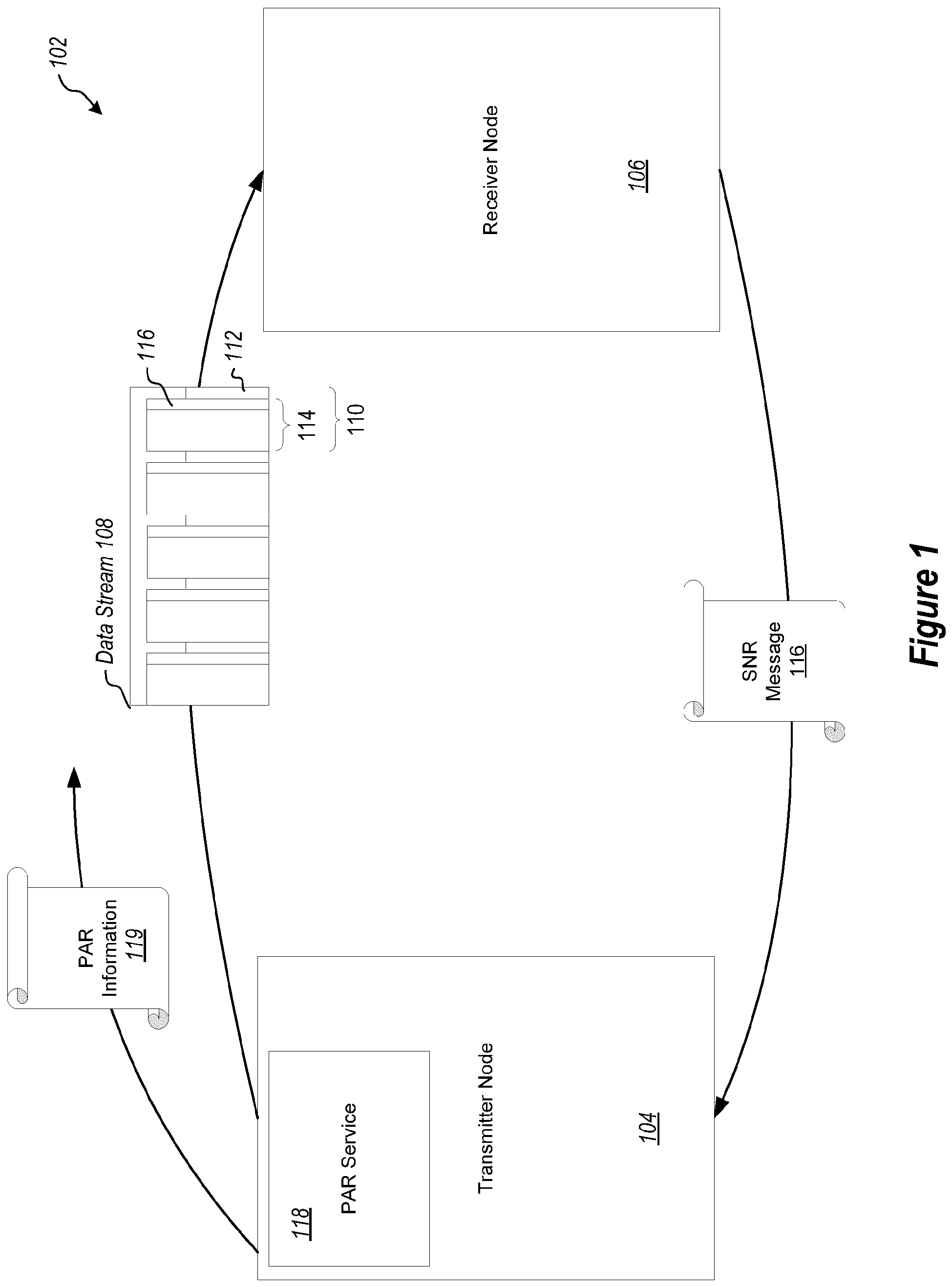 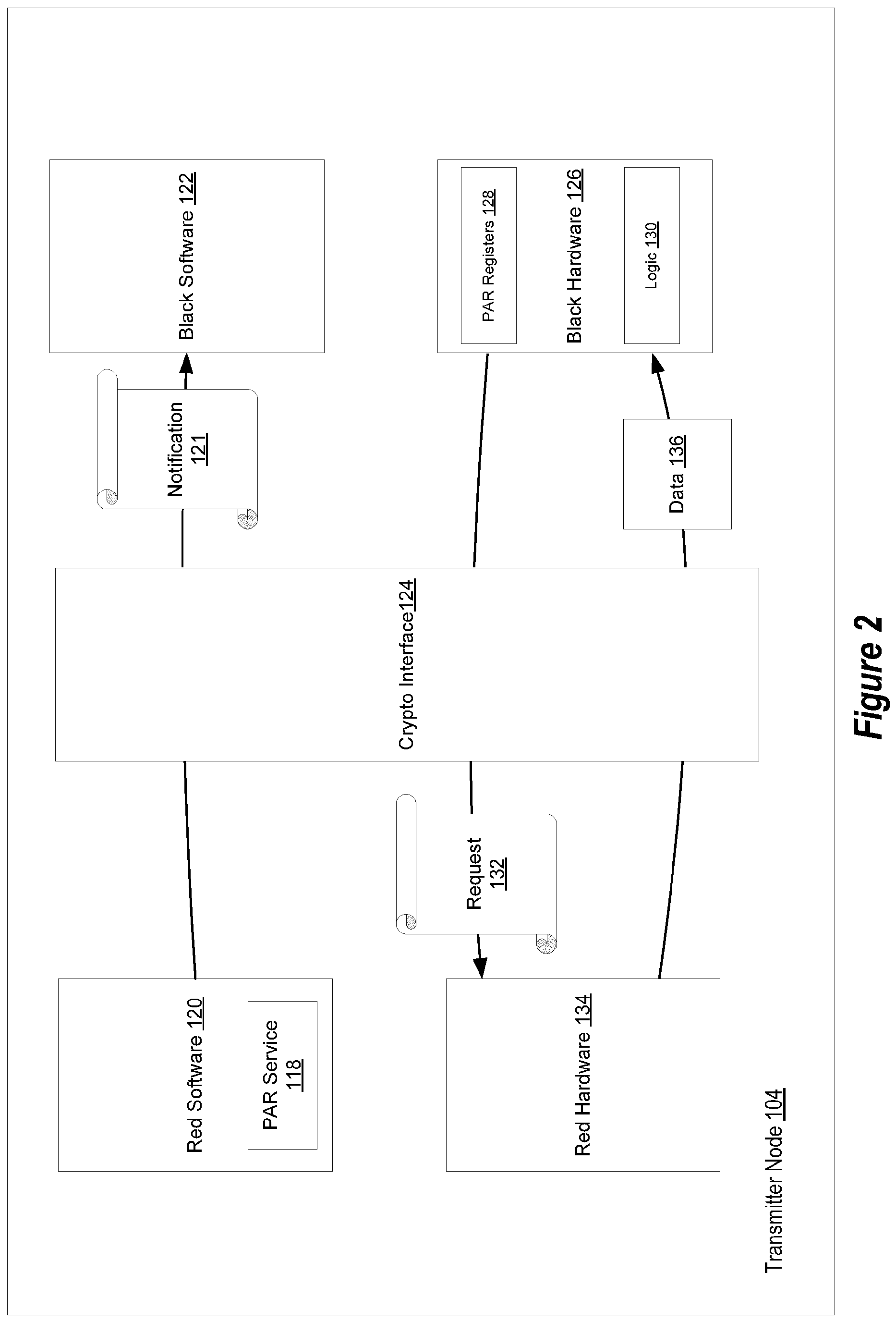 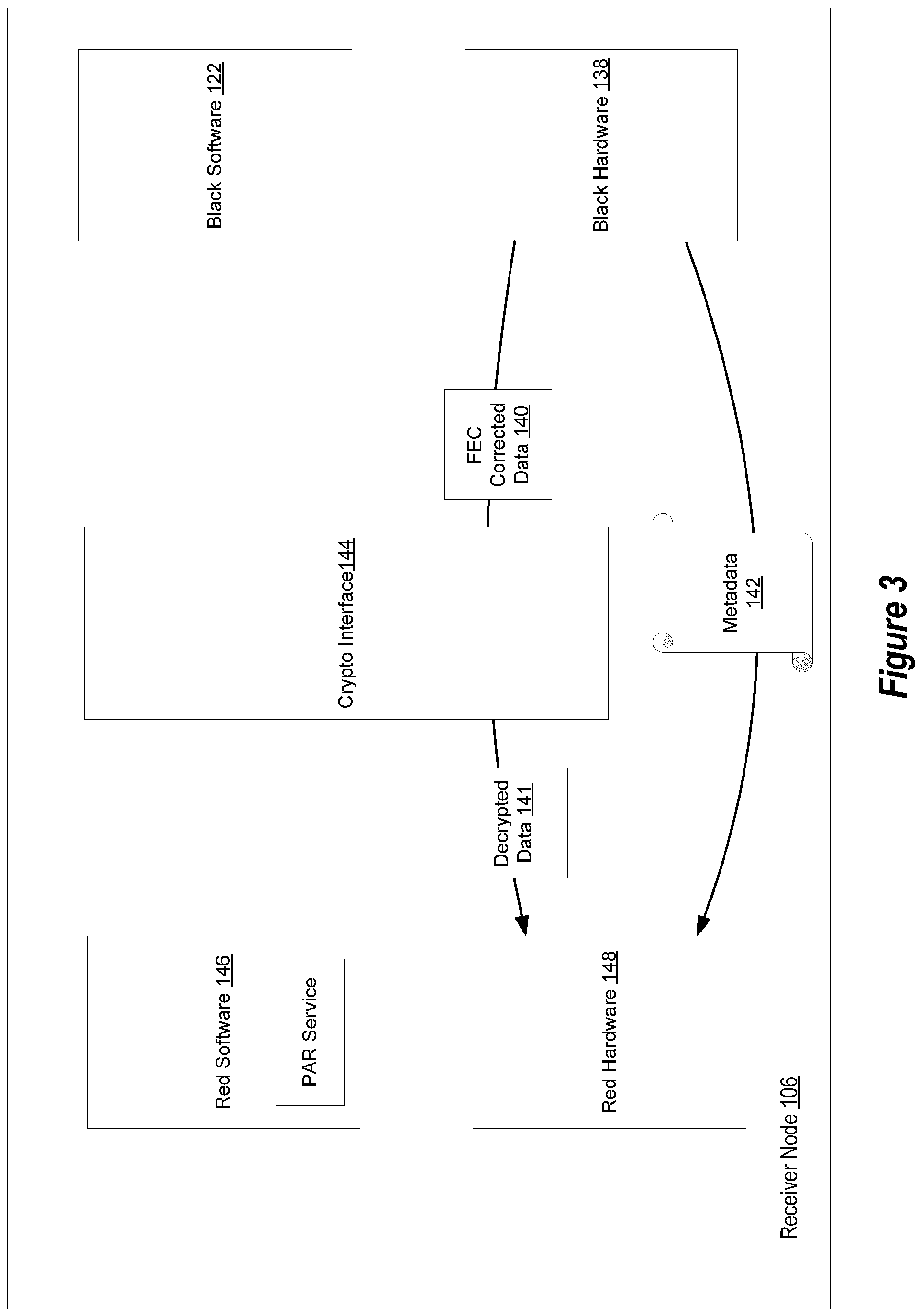 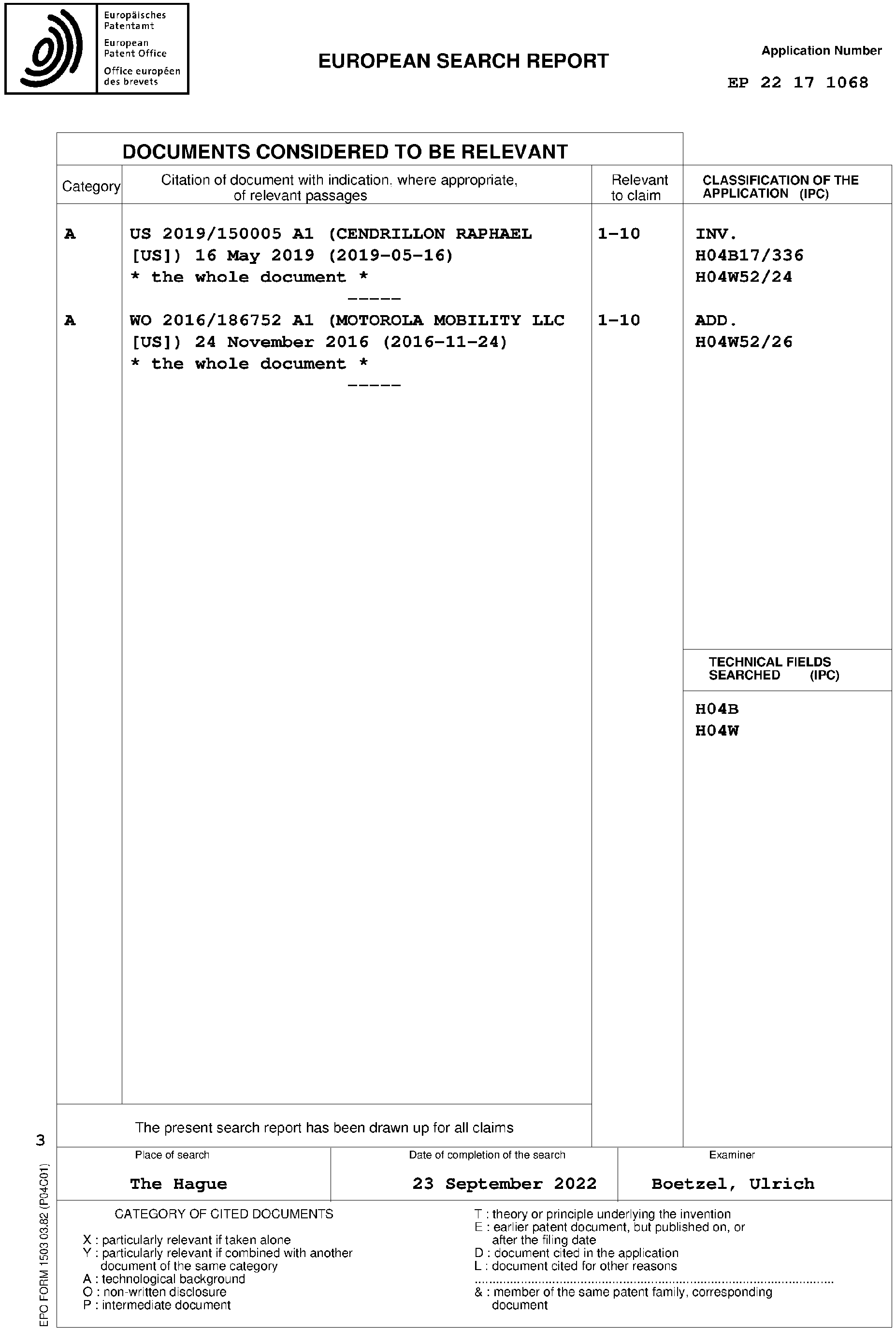 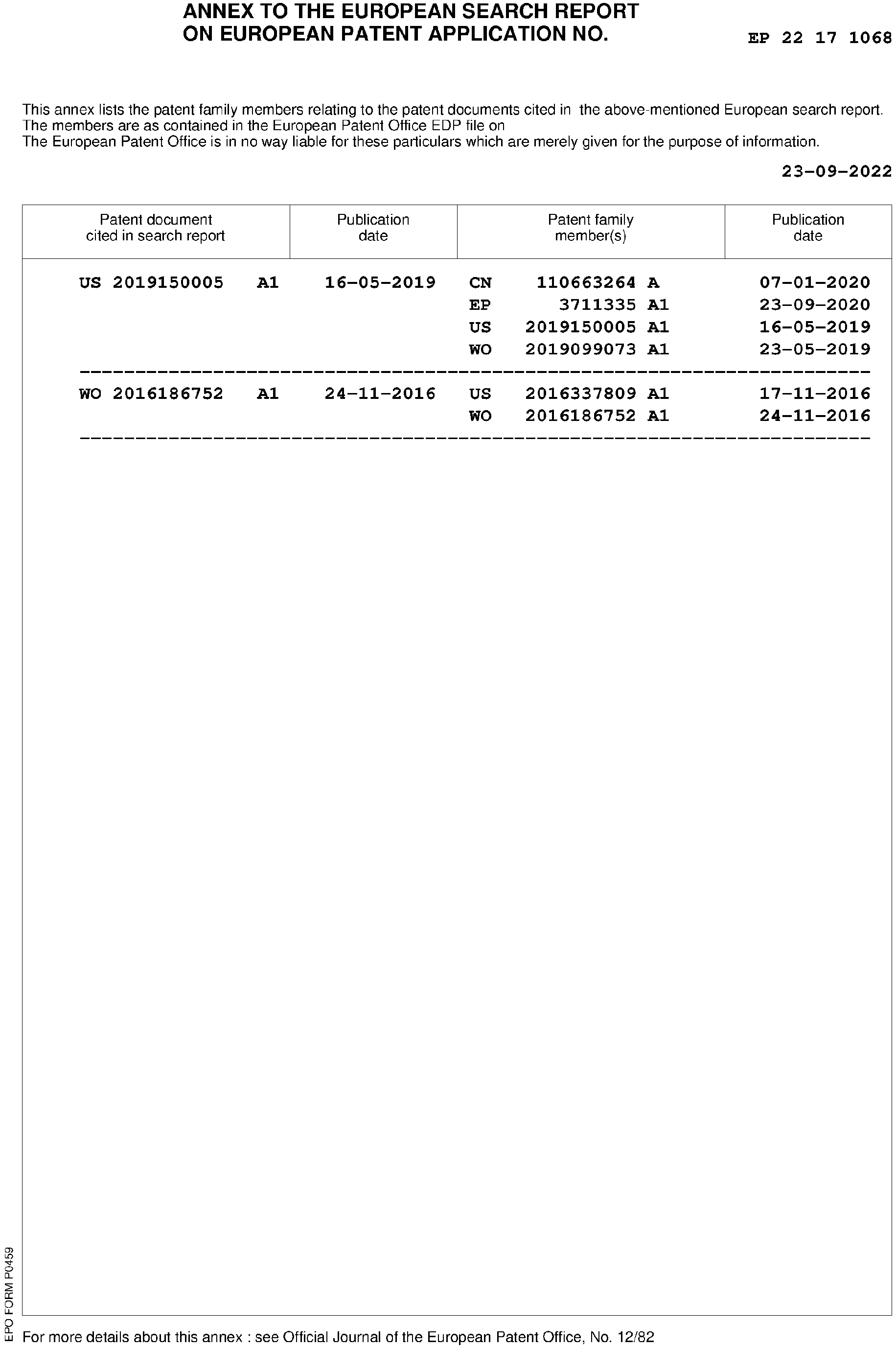